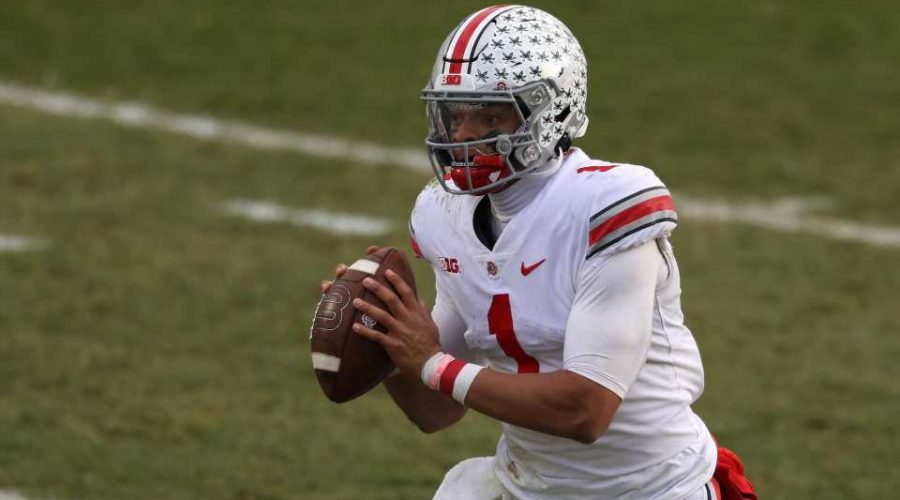 Could Justin Fields be dropping a small hint to who might draft him?

This is NFL Draft season, and any crumb of information about where prospects could land might as well be a feast.

Take, for example, Ohio State QB Justin Fields. With the Jaguars and Jets expected to select Trevor Lawrence and Zach Wilson, respectively, the 49ers’ shock move up to No. 3 overall puts them in prime position to select Fields in this draft, and 49ers brass attended Fields’ second pro day Wednesday.

Fields may have offered a small hint about who might be interested in his services with a small mechanical change — his right foot back in shotgun as opposed to his left, which seems to mirror a Kyle Shanahan preference for his quarterbacks.

McFadden said that Fields has customarily played with his left foot back in shotgun as opposed to his right while at Ohio State, which makes the mechanical switch intriguing.

Reports suggested that Fields was implementing certain Shanahan concepts at his pro day, so maybe the mechanics were also a noticed (and welcomed) change for him and his draft prospects.

But, not so fast, my friend: QB trainer Quincy Avery chimed in, saying that there’s nothing to see here, folks, move along. Fields is simply operating from a more comfortable position while training, Avery said.

Fields has come under intense scrutiny in recent months, causing his draft stock to (seemingly) tumble. Once considered the de facto QB2 in this year’s draft, Fields has been rumored to fall in the rankings.

Rumors suggest that the 49ers are interested in Alabama product Mac Jones at No. 3 overall, but maybe Fields has put himself firmly back into the discussion for that spot.

April 15, 2021 NFL Comments Off on Did Justin Fields offer a hint to who may pick him in the NFL Draft?
NFL News