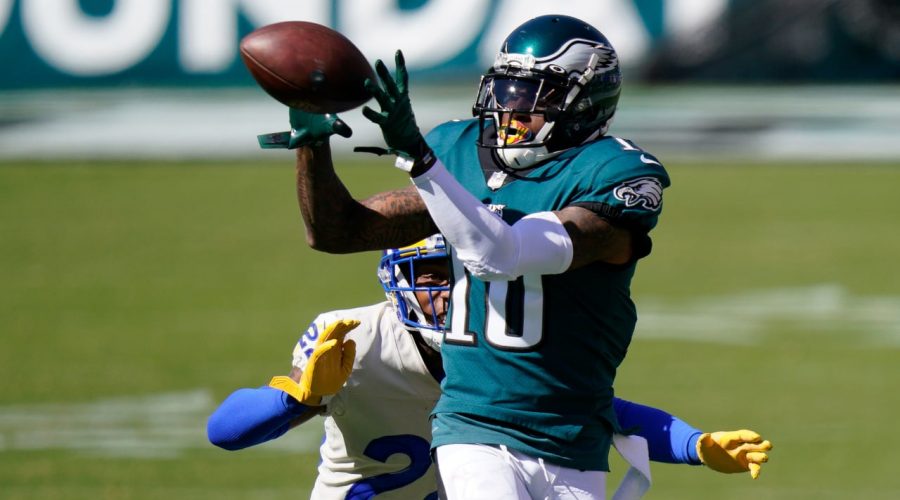 Returning home to Los Angeles was an obvious narrative to survey once it was learned DeSean Jackson was signing with the Rams, but reuniting with coach Sean McVay superseded any preferences for the veteran wideout.

“There were other options out there. I could have went to other teams, other places. But my focus was really reuniting with Sean McVay,” Jackson said on Friday, via the team’s official transcript. “Talking to McVay once I was a free agent and really just kind of having those open conversations, talking about the possibilities, it was something that was intriguing for me. So, I think that overweighs everything.”

Jackson, who agreed to a one-year deal with the Rams this week, is hoped to become the vertical threat the team sought this offseason. Alongside Cooper Kupp﻿, Robert Woods and Van Jefferson﻿, Jackson rounds out a versatile receiving corps for new quarterback Matthew Stafford, who is the centerpiece of the Rams’ transformative offseason.

“For me, I couldn’t ask for a better situation to have a quarterback,” said Jackson. “And the timing is perfect because they’d just got the trade done before I came and they signed me, so it was perfect timing. It’s going to be special. When we were talking, we were like we can’t wait to get out there and start working together. We don’t know how the offseason is going to play out, but we’re definitely going to get together and work.

“That dude, man, he’s a beast. His arm is out the world. So, I’m excited too — I’m going to say, ‘I’m going to run far, you just throw it far’ and hopefully we can beat everybody (laughs).”

McVay was Jackson’s offensive coordinator for three seasons in Washington from 2014-2016. Jackson eclipsed the 1,000-yard mark in two of those three years and had 142 receptions for 2,702 yards and 14 touchdowns in 39 total games for Washington. Jackson recalls McVay bringing him in after getting released by the Philadelphia Eagles, and how he was utilized in a more imaginative fashion.

“Well first off, Sean McVay, we have a very special relationship,” Jackson said. “I can remember when the Eagles released me in 2013 and just to have that relationship with a guy that’s kind of close to me in age, then Jay Gruden actually was our head coach at that time. I could just remember where I was at in my career after coming off of one of the greatest seasons I had in 2013 and being released, it was almost like a stab in my back, but to have Sean McVay, Jay Gruden, like kind of just come to me like, ‘Man, we’re not worried about any of that stuff people were saying, we believe in you as a player, as a young human being.’

“It was like the opportunity they were able to give me, for me it sits somewhere special in my heart and my life. So, since day one of getting there at Washington with McVay and Jay Gruden was something different, because I was able to come in and have a role where it was unlike any other. … It was a great thing because when you hear about DeSean Jackson, you always think about a one-trick pony or you think about him going deep in a vertical threat, but it’s like, no, we’re going to use him where people don’t think that we’re going to be utilizing him. For me, that’s something that was very intriguing to be able to come back and reemerge with somebody that really knows me.”

The past two years have been frustrating for Jackson, who has appeared in only eight games during that span. Injuries, which have an unfortunate theme as of late for the 34-year-old, marred his reunification with the Eagles and have kept Jackson out of sight. Jackson admitted he’s still rehabilitating now though feels “100-percent healthy” today, but going through the trials and tribulations of an aging receiver in the NFL have given him time to reflect.

“I’ve been around some great teams, I’ve been a part of some great teams and done some special things,” Jackson said. “My first year being a rookie, we actually made it to the NFC Conference Championship Game. One game away from the Super Bowl where I literally thought I scored the winning touchdown and then (Cardinals WR) Larry Fitzgerald comes down and scores on us and we lose. So, it’s just remembering everything and how that feels to be on a team that’s capable of really making it and having to push until late December, January and obviously February is when the Super Bowl is, but for me that’s my No. 1 goal.”

Playing in L.A. will be special, the Crenshaw native admitted, but there’s only one real homecoming in mind for Jackson as he enters his 14th NFL season.

“Just to have it here in L.A., especially with the Super Bowl being here this year — I mean, I don’t want to get too excited and talk about any of that stuff, but my heart and my mind, I’m going to work my hardest to work my tail off and get to that to bring something special to the city, man, because it’s definitely deserving.”

March 28, 2021 NFL Comments Off on DeSean Jackson on signing with Rams: Reuniting with Sean McVay an 'intriguing' factor
NFL News