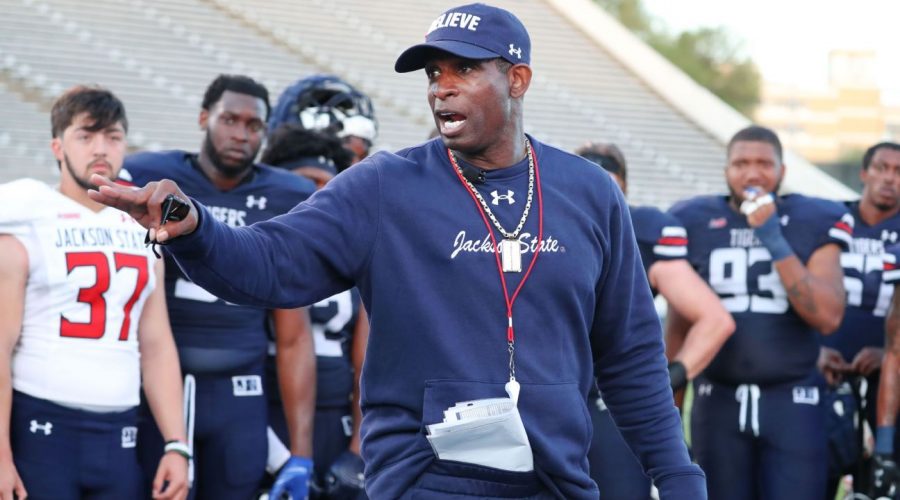 Deion Sanders’ coaching career has reached the highest level of college football — and a surprising destination in Colorado.

Sanders, the Pro Football Hall of Famer who transformed Jackson State’s program the past few years, was named Colorado’s new coach Saturday night. After interviewing for several Power 5 jobs in recent years, Sanders’ ascent to the FBS seemed like only a matter of time. But rather than remaining in the South, where Sanders spent most of his playing career and his entire coaching career, he’s headed to a completely new region with the mission of reviving a once-elite Colorado program that has faded from view for much of the past 20 years.

“Not only will Coach Prime energize our fanbase, I’m confident that he will lead our program back to national prominence,” athletic director Rick George said in announcing the hire.

Sanders has been viewed as the perfect coach for the current college football climate, in which the transfer portal and name, image and likeness are king. He is a historic hire in many ways, including Colorado’s third consecutive Black coach — a first for a Power 5 program. But can he boost a program that is 89-152 since the 2003 season?

ESPN’s Adam Rittenberg, Andrea Adelson and Paolo Uggetti and Jean-Jacques Taylor of Andscape analyze the Sanders hire and what it means for Colorado.

Paolo Uggetti: Since 2011, Colorado has finished in either last or 11th place in the Pac-12 10 times, but the program has plenty of intrigue and potential due to its history and location. It is an ideal landing spot for a coach like Sanders, whose fast-rising reputation as a head coach, recruiter and — perhaps most importantly — face of a program was going to garner him a Power 5 job sooner rather than later. Colorado has lagged behind its peers in nearly every category and, at the very least, the Buffaloes needed an injection of energy. Sanders will bring that and more, including a real recruiting advantage and an ability to institute a culture that will stand out in the Pac-12. Any success in Boulder will be received with open arms, and because Colorado has made a home out of the conference cellar over the past decade, Sanders has the ability to surpass expectations quicker here than at other big-time programs.

Adam Rittenberg: Sanders had interviewed for Power 5 jobs the last few years at TCU and Arkansas, but ultimately needed an opportunity. Although he has never worked in Colorado, the program has shown with the right coach and recruiting approach it can compete nationally. Colorado needs to recruit Texas, a state where Sanders lives and should provide immediate upgrades. His overall name recognition will completely reshape Colorado’s brand, which needs a boost as somewhat of a forgotten program in the Pac-12. Colorado is one of few Power 5 programs with a decent history of hiring Black coaches. The school has become the first Power 5 program to ever hire three consecutive Black coaches. Four of the past five Buffaloes coaches are Black.

Andrea Adelson: I think the better question is why Sanders? There is an easy answer here: Colorado needs its program jump-started, and gaining a coach with the name recognition and clear recruiting chops Sanders possesses is absolutely huge. Just look at what Sanders did in flipping the No. 1 recruit in the country last year, Travis Hunter, from Florida State to Jackson State on signing day. We all know how far behind Colorado has fallen in the Pac-12, but bringing in a coach with the brand Jackson has will immediately make Colorado relevant again in the minds of recruits. Jackson has nowhere to go but up with Colorado, and in all honesty, that lessens the pressure to win right away that would exist at a schools in, say, the SEC.

Jean-Jacques Taylor: Sanders needed only two full seasons to make Jackson State the jewel of the Southwestern Athletic Conference. The Tigers went undefeated in the conference for the second consecutive season, and they are 23-2 in their past 25 games. Jackson State had only one victory by a margin of fewer than 10 points this season, so Colorado is about accepting a bigger challenge. The Pac-12 is not nearly as daunting with USC and UCLA going to the Big Ten, and the bigger budget a Power 5 program provides will allow Sanders to maximize his strengths, such as recruiting.

Uggetti: This is not going to be a one-year overhaul the likes of what Kalen DeBoer and Lincoln Riley just pulled off at Washington and USC, respectively. Those coaches took teams coming off 4-8 seasons and led them to double-digit wins. And that’s not because of Sanders’ ability as a head coach, but rather because rebuilding this Colorado program will take more than just a couple of changes and additions. An open floor plan isn’t going to solve the issues; the Buffaloes need to break out the bulldozer. Sanders feels like a hire who’s going to be more willing than most to tear it all down. For Year 1, perhaps the bar should start here: Don’t finish last in the Pac-12.

Rittenberg: Colorado’s roster is in really bad shape. The team had an exodus of good players to the transfer portal last winter, and it’s happening again. Sanders likely will retain certain players, and he will immediately make Colorado a destination for transfers, including some of his best players from Jackson State. The team couldn’t get much worse than this season, when it was outscored 534-185. Sanders will need more than one recruiting cycle to fix things, but a moderate improvement is quite possible in the portal era. Bowl eligibility could be a tough ask in Year 1, but Sanders will completely change the atmosphere around the program and upgrade the talent level.

Adelson: If Colorado plays more competitive games and gains the type of exposure this program has been lacking for the past two decades, the season should be considered a success no matter how many wins Sanders gets in Year 1. Do not underestimate how important that type of exposure is if Colorado is making games more interesting and fun: a 3½-hour walking billboard for what is possible. It did not take long for Sanders to start winning at Jackson State, and though this will be a much more difficult transition, I am not going to rule anything out.

Taylor: The biggest challenge for Sanders at Colorado is simply making the roster better and upgrading the talent. Former linebacker Nate Landman, who earned second-team All-Pac 12 honors, was the only first- or second-team all-conference player on the Buffaloes last season. Sanders is adept at social media marketing, so it shouldn’t take him more than two years to overhaul the roster through the transfer portal and recruiting. He has some dynamic recruiters on his staff, and he’s going to be one of the best closers in the country.

Uggetti: Sanders already showed he can recruit while going up against some of the biggest programs in the country, but now, recruiting won’t be just about trying to beat the Florida States of the world for a top player. Instead, it will be about building a program from the ground up. Talent will always matter and win out, but Colorado won’t necessarily benefit from one five-star player. Instead, Sanders will have to create a foundation of local and regional recruiting that can be sustained over time.

Rittenberg: Staffing will be key. Sanders needs to surround himself with at least a few coaches who have worked in the Power 5 and ideally the Pac-12. Arkansas athletic director Hunter Yurachek interviewed Sanders twice for the team’s head-coaching vacancy a few years ago but ultimately had some concerns about the staff Sanders would put together to compete — on the field and in recruiting — in the SEC. Sanders will be the face of the program and lead elements like NIL, but he will need a larger and more seasoned supporting cast. He’s also entering an unfamiliar region and will need time to figure out what strategies will work best for this program at this time.

Adelson: I agree with Adam here, and though Sanders can attract players given his personality and popularity, I think getting recruiters and player personnel staff who know the strengths of the region and already have connections in the general recruiting area will be important. Sanders could probably recruit nationally if he wanted, but it may be beneficial to hone in on some key spots that can pay dividends.

Taylor: Colorado lost 10 games by 23 points or more and won only one time this season. The expectation in Sanders’ first season as head coach has to be for the Buffaloes to simply be competitive. Sanders will create a culture that detests mediocrity and focuses on the details. If Colorado can win three or four games in its first year under Coach Prime, it would constitute tremendous progress.