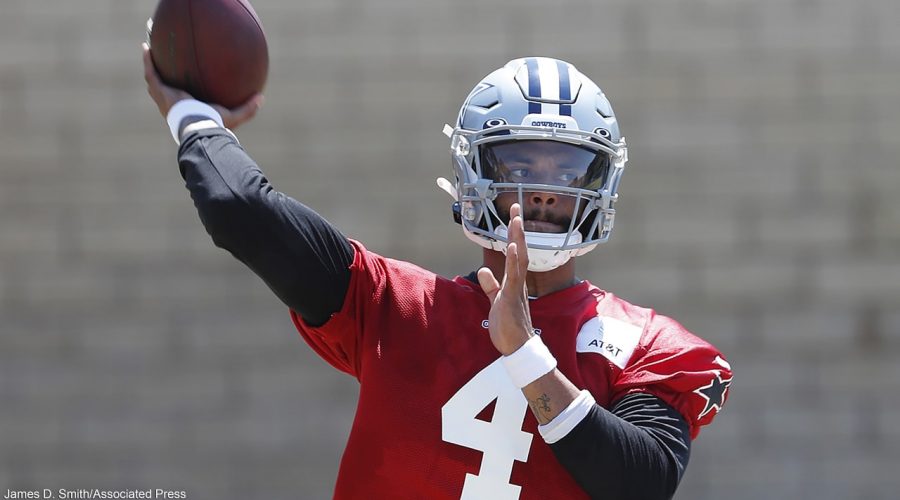 Dak Prescott﻿’s progression has taken an encouraging turn in the last few days, which might lead to an on-field debut surprisingly soon.

Cowboys executive vice president Stephen Jones was asked if Prescott could play in Dallas’ Aug. 21 preseason contest against Houston, one of four games in which Prescott said he’d like to participate before the start of the season.

“It’s not out of the question,” Jones said Wednesday, via the Dallas Morning News’ David Moore. “The question’s going to become, when we get there, do we do it or not?

“We’ve got to make good, sound solid decisions for Dak as we go here. But I wouldn’t rule it out.”

With the first preseason tilt already in the past and Prescott having spent that contest watching from Oxnard, California, there are three chances remaining. Prescott completed some “light throwing” in the Cowboys’ Saturday camp practice following Dallas’ 16-3 loss to Pittsburgh in Thursday’s Hall of Fame Game, and he could be seen participating in every drill during their Wednesday session, per the Dallas Morning News’ Michael Gehlken.

Light throwing and drill participation is an improvement, but not quite a full ramp-up to being prepared to play in a game that won’t end up counting toward Dallas’ final record this season. There’s no need to rush him back to get snaps with a little under a month to go before the start of the regular season.

Hence, the target date of Aug. 21, 10 days from now and in the sweet spot of the preseason slate in which starters are expected to see the most playing time of the portion of the schedule before traditionally relegating them to the sideline for the final preseason game of the year. If the Cowboys truly want to fulfill Prescott’s wish of seeing preseason snaps, it would seem the Aug. 21 game against the Texans is their best (if not last) chance to do so.

For now, caution is among chief importance to the Cowboys when it comes to managing Prescott’s physical condition. After spending a season drifting in the abyss of a season spent largely without Prescott, the Cowboys are focused on avoiding a similar outcome. Preseason snaps might be sacrificed to achieve this goal, but if the Cowboys end up returning to the playoffs in 2021, it will all have been worth it.

August 11, 2021 NFL Comments Off on Dak Prescott playing in Cowboys' third preseason game 'not out of the question'
NFL News