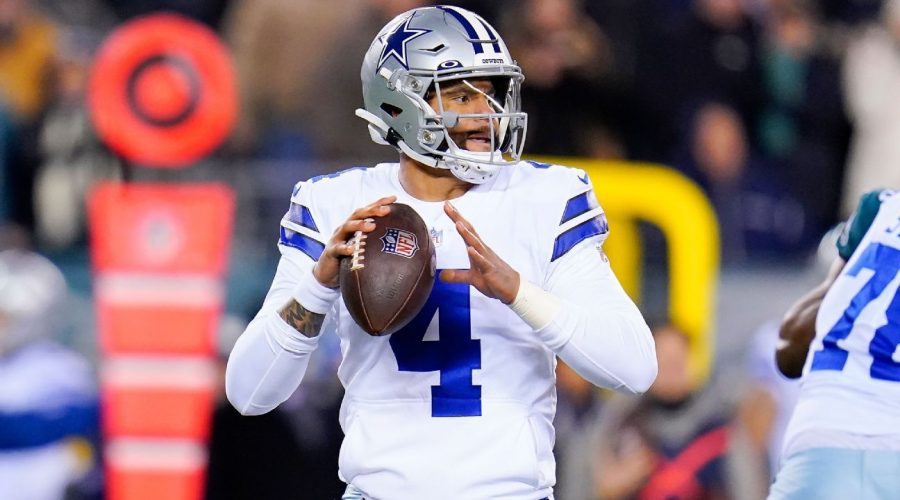 PHILADELPHIA — With an 8-yard throw to Corey Clement in the fourth quarter against the Philadelphia Eagles on Saturday, Dak Prescott established the Dallas Cowboys’ single-season record for touchdown passes with 37, breaking Tony Romo’s record.

It was Prescott’s career-high fifth touchdown pass of the game, giving the Cowboys a 37-20 lead.

Before his record-setting throw, Prescott threw four touchdown passes in the first half to tie Romo’s mark, which was set in 2007, his first full season as the Cowboys’ starter.

Prescott did not have the benefit of a 17th regular-season game since he missed the Oct. 31 meeting against the Minnesota Vikings with a calf strain.

It is the 11th time in franchise history a quarterback has had five touchdown passes in a game. Romo last had five TD passes in a game on Oct. 6, 2013, against the Denver Broncos. Don Meredith had three five-touchdown games, while Romo and Craig Morton did it twice.

Prescott’s previous season high was 30 in 2019. He has three games with at least four touchdown passes this season and seven for his career.

Prescott started his touchdown run with a 14-yard strike along the sideline to Cedrick Wilson on the Cowboys’ first drive. In the second quarter, he hit Wilson for a 24-yard touchdown and followed that up with back-to-back scoring throws to tight end Dalton Schultz in the final 1:45 of the first half.

The first was a 2-yard toss to the flat and the second was a 9-yard bullet in the middle of the field with five seconds left in the half after a shanked punt gave the Cowboys the ball at the Philadelphia 43.

Perhaps more importantly, the Cowboys offense was able to show some life in a road game, even if it came against an Eagles defense that was without a number of starters. The Cowboys had gone five straight road games without scoring more than 27 points as the offense hit a lull after Prescott’s calf strain.

In a 30-point first half against the Eagles, Prescott completed 16 of 21 passes for 240 yards and was able to connect with Amari Cooper (five catches, 79 yards), Wilson (four catches, 82 yards) and CeeDee Lamb (two catches, 45 yards) with five passes of more than 20 yards.

Through three quarters, Ezekiel Elliott had 87 yards rushing to eclipse the 1,000-yard mark on the season. He had not had more than 52 yards in his past 10 games. Elliott entered Saturday with 915 yards while dealing with a right knee injury for most of the season.