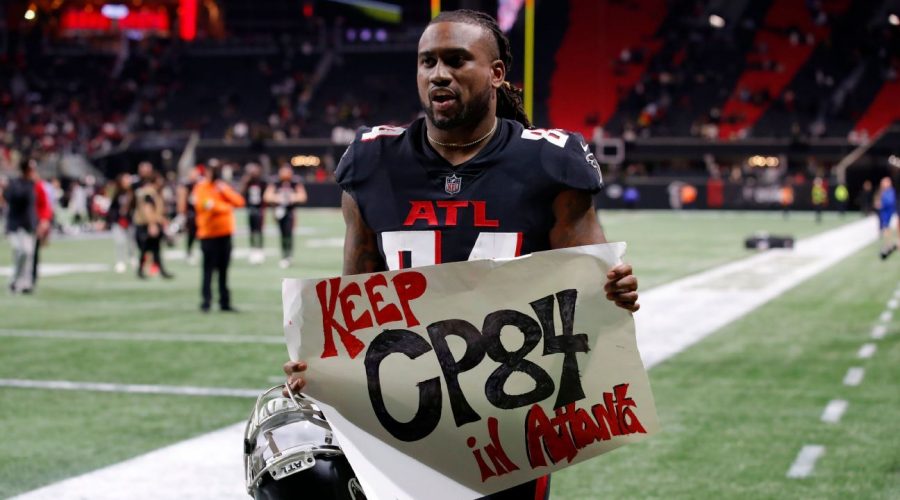 Cordarrelle Patterson had the best season of his career with the Atlanta Falcons in 2021, and heading into NFL free agency in a couple of months, Patterson has made his preference clear: He’d like to stay in Atlanta.

And he’s going about sharing his desire for a new deal in a different way: on his shoes.

Patterson posted a pair of cleats on Wednesday portraying two people on what appears to be a bus with one saying, “Cut the check Mr Blank,” less than a week after he wore cleats during Atlanta’s season finale saying, “Why not retire in Atlanta?”

He led the Falcons in rushing this past season and was third on the team in receiving, and his 11 total touchdowns from scrimmage were almost three times as many as the next Atlanta player.

Members of Patterson’s family have been clear about their desired destination for him.

“My mama, she actually wants me to stay here, because it’s only three hours away from the house, and they get to come out to all the home games and stuff like that.” said Patterson.

“She told me like two days ago she would love me to be here. But the business side, man, a lot of people don’t see it, the business side of everything, so I’m just going to let my agent and the GM handle that and just sit back and keep grinding.”

The 30-year-old Patterson, who was a first-round draft pick in 2013, played for the Minnesota Vikings, Oakland Raiders, New England Patriots and Chicago Bears, before signing with the Falcons on a one-year deal in March.