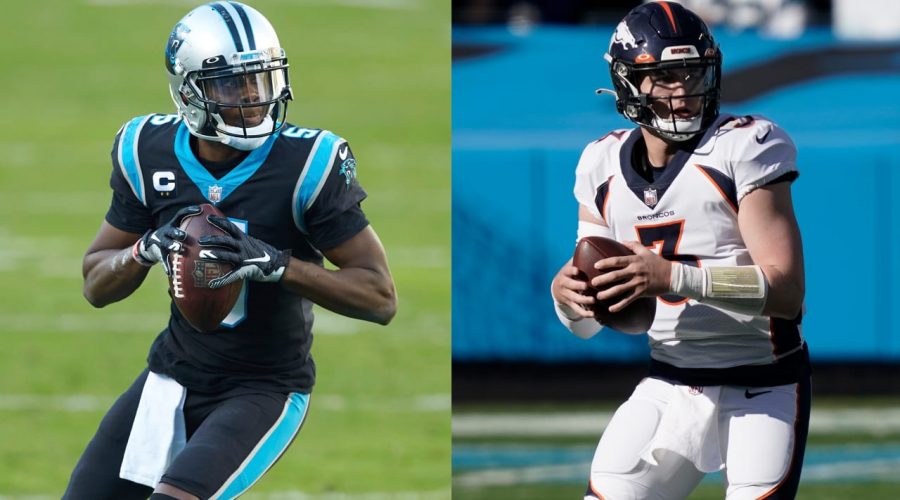 A week from today, the quarterback battle in Denver kicks off in earnest when the Broncos report for training camp on July 27.

To this point, the Broncos brass has simply laid the groundwork for the competition between Drew Lock and ﻿Teddy Bridgewater﻿. Before heading into summer break, coach Vic Fangio noted that it was much too early to make any assumptions about where the QBs were at in the race for the starting gig.

When training camp finally opens, the evaluation will be no holds bar.

NFL Network’s James Palmer noted Monday on NFL NOW that the Broncos believe just 2 to 3 percent of their QB assessments have taken place. The bulk of the eval is coming during camp practices and the preseason.

Don’t expect a quick decision from the Broncos brass, either.

“This could go, to my understanding, through all three preseason games before they make a decision,” Palmer added. “That’s where they stand right now when they look at both of these quarterbacks.”

The NFL winnowing down the preseason schedule to three games with the addition of a 17th regular-season bout has conjured questions regarding how coaches would divvy up those ramp-up games. A week break before the regular season could encourage coaches to continue using the third game as a dress rehearsal for starters. Or we could see the trend of most stars and starters sitting the entire exhibition season.

With Denver amid a vital QB competition, we may see the starters in all three tilts.

The Broncos QB battle will be one of the biggest storylines when training camps get fully underway next week.

Fangio repeated all spring that the plan is for the signal-callers to split reps 50/50 — perhaps not half-and-half every day, but when the overall reps are analyzed, the plan is for each to get equal opportunity.

Lock entered last season with promise after a solid end to his rookie campaign. A bevy of boneheaded mistakes characterized his sophomore campaign, however, and sunk Denver’s playoff chances. The Broncos believe the third-year QB has improved his footwork and accuracy this offseason. The biggest thing for Lock to prove is that his decision-making is massively better. Those mental trials can only truly be judged versus live defenses in preseason games.

Bridgewater, on the other hand, doesn’t have Lock’s big arm, but he’s a steadier signal-caller who makes quick decisions, gets the ball out, and can ensure the offense is always in the optimal play-call.

The biggest question in the battle will be who makes the least amount of game changing mistakes.

Those preseason games will be massive in determining who starts Week 1 under center for a playoff-ready Broncos roster. As such, it makes sense it might take all three preseason tilts for Fangio to make his decision.