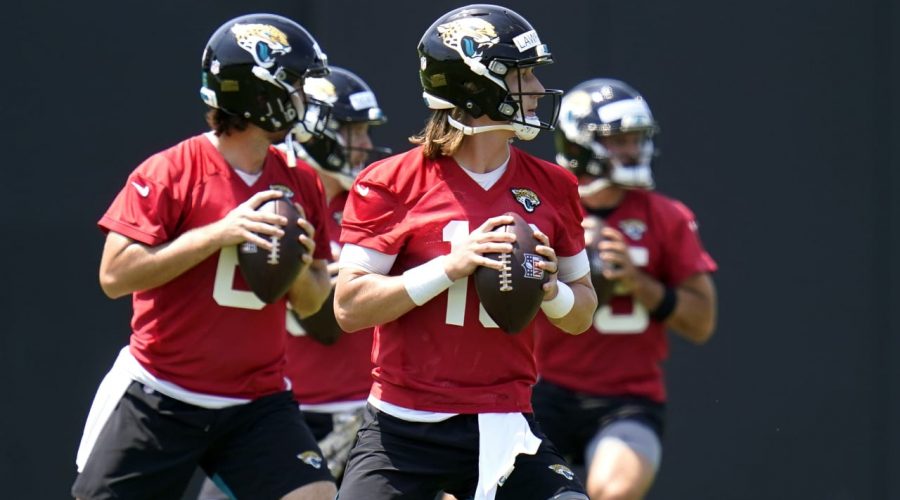 A year of change for the Jaguars hasn’t spared anyone, including Gardner Minshew﻿’s mop.

Where Minshew stands with the club remains intriguing, though, because while the Jaguars are clearly moving into a new era under center, Minshew is still around. And despite what one might say about a backup seated behind a newly anointed savior of a franchise, Minshew still carries value.

The question, then, is what Minshew’s role might be with the new-look Jaguars. Passing game coordinator Brian Schottenheimer cautioned against assuming Minshew was entrenched as the No. 2 quarterback when asked about the position group Wednesday, especially after the Jaguars added veteran passer C.J. Beathard in the offseason. In his mind at this stage, everything remains wide open, even after Jacksonville spent the No. 1 overall pick on Clemson star Trevor Lawrence﻿.

“Well, again, I don’t agree 100 percent,” Schottenheimer said Wednesday of Minshew’s projected standing as the second option under center. “We certainly haven’t named a starter. Our objective from Day 1 was to build the best quarterback room that we could. We knew what we had in Gardner. C.J. was a guy that we really looked at on field and we saw him make a lot of the plays and have some of the athleticism that we really, really like from our quarterbacks. Jake Luton was highly [thought] of last year, I know we really like him in Seattle when he came out. And then of course you get a chance to add a Trevor Lawrence to the mix, you’re going to do that. But we’re not in a position where we’re saying hey, ‘[No.] 1, 2, 3, 4.’

“We’re letting them all roll. Everybody’s getting reps. We want this thing to be really competitive. Ultimately, when we name a starter, we’ll name a starter. And Urban will do that when he’s ready. But I’ve just enjoyed watching these guys compete. Like I said, from Gardner’s standpoint, he’s an alpha. He’s got leadership ability; you love that. C.J.’s come in here, he’s had to catch up with some of the system stuff because some of the verbiage here stayed the same with coach [offensive line coach George] Warhop staying. And then of course Jake has just been a guy, probably the least amount of reps, but every time he’s been out there, he’s been moved the team and he’s done things where we’re like, ‘Wow, that’s really great.’ I’m thrilled with where we are right now as a quarterback room. It’s still too early to say how this thing’s going to play out.”

While we can see your eyes rolling from here, we should give Schottenheimer the chance to truly evaluate his quarterback room while he has ample time. Sure, Lawrence was selected to be the franchise quarterback for the next decade-plus, and while he’ll most likely be the Week 1 starter, it’s still up to him to truly grab a hold on the job. And it’s up to the rest of the quarterbacks to prove why they should be the first in line behind the golden boy — or even ahead of him, if things don’t go as expected.

Though Beathard’s occasional appearances with the 49ers occasionally excited fans, Minshew would seem to have the best combination of experience and proof that he can do the job adequately in the event Lawrence isn’t on the field. Minshew has played in 23 games in his career (20 starts), and at one point during his surprising rookie season, he appeared suited well enough to handle starting duties. This prompted Jacksonville to trade ﻿Nick Foles﻿ to Chicago and hand the reins to Minshew in 2020, but that plan didn’t end up working out due to an injury that limited Minshew to nine games and forced the Jaguars to turn to ﻿Mike Glennon﻿ and the aforementioned Luton.

When Minshew returned, Jacksonville was in a state of disarray so severe, it became clear the worst team in the NFL was on a direct path toward selecting Lawrence.

Minshew still has two years left on his deal, which is as inexpensive as they come due to his sixth-round selection in 2019. He carries with him experience gained from his whirlwind-like first two seasons in the NFL. That could be useful for Lawrence, especially with Minshew’s propensity for leadership that Schottenheimer described.

As for his standing on the depth chart, that remains to be seen. Luckily, the Jaguars have all summer to figure that out.