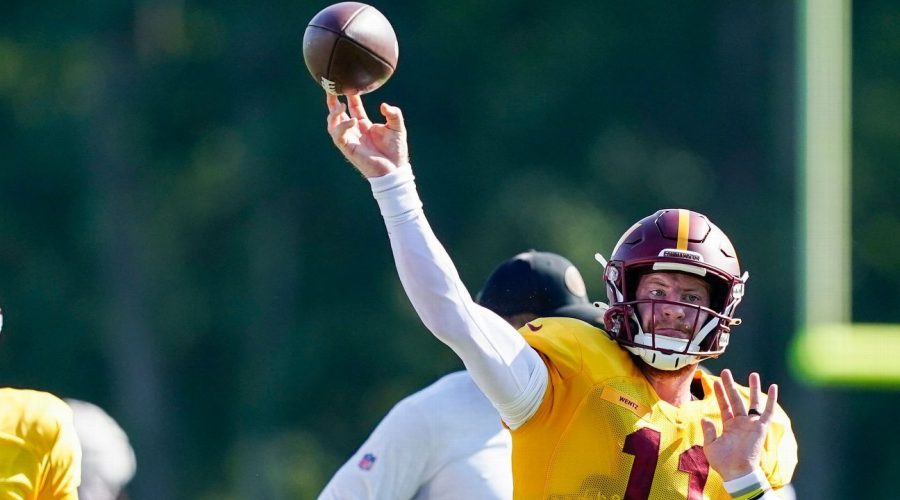 The NFL’s 2022 training camp will hit top speed this week with a full slate of preseason games, and the intensity is ramping up in practices around the league. Tuesday was highlighted by promising performances from Las Vegas Raiders defensive end Maxx Crosby and Washington Commanders quarterback Carson Wentz, who showed better timing with his receivers.

Philadelphia Eagles receiver Quez Watkins also had a good day as he works to solidify a role on a deep unit, but second-year New York Giants receiver Kadarius Toney had another tough day in what has been an up-and-down camp.

The preseason schedule includes two games on Thursday, five on Friday, eight on Saturday and one on Sunday.

Here’s what you need to know from camps across the league.

Washington Commanders: Quarterback Carson Wentz and the passing game have been inconsistent this summer as the Commanders work on their timing. Sometimes Wentz misfires; other times receivers run improper routes leading to off-target throws. But, on Tuesday, that group had one of its best days in camp.

Wentz was more on point with some of his throws, zipping one in to Terry McLaurin on an out route against tight coverage. Wentz threw more in rhythm during team drills, compared to past practices and capped one drive by connecting with receiver Dax Milne for a 20-yard touchdown in which he hit him in stride as he ran across to the corner of the end zone. Wentz also hit rookie Jahan Dotson for about 30 yards on a perfect throw down the right side. The passing game needs to keep progressing after an often bumpy start, but Tuesday was a good step. — John Keim

Las Vegas Raiders: Maxx Crosby dominated the Raiders’ fully-padded practice on Tuesday, much to the chagrin of the offensive line and to the delight of the assembled fans. Because when the Pro Bowl defensive end wasn’t blowing by or simply bull-rushing right tackle Alex Leatherwood in one-on-one-drills, he was still making quarterback Derek Carr uncomfortable in the pocket.

Crosby, who signed a four-year, $99 million extension this offseason, was also involved in the first fight of camp, mixing it up with rookie offensive lineman Dylan Parham in 11-on-11s. The two threw punches and Parham lost his helmet as a pile ensued and fellow edge rusher Chandler Jones played peacemaker. Hey, it’s already Week 3 of camp for Las Vegas, which reported earlier than every other team, so tempers are going to rise. — Paul Gutierrez

New York Giants: The Giants held a really light practice Tuesday in the intense heat and humidity. Still, wide receiver Kadarius Toney didn’t make it through the whole workout. He appeared to grab at his hamstring after running a route and later had his right leg worked on by a trainer on the sideline.

It’s troubling, because Toney struggled throughout his rookie season with various injuries (hamstring, ankle, quad, oblique, finger and shoulder) and missed the spring following a knee procedure. He’s already had several maintenance days this summer when he did not participate in live drills. The enigmatic receiver has experienced an up-and-down start to training camp that included an incredible leaping touchdown grab on Day 1 and three drops at Monday’s practice. — Jordan Raanan

Detroit Lions: The Lions will be making their debut on “Hard Knocks” on Tuesday, but quarterback Jared Goff says he won’t be tuning in because of it airing so late (10 p.m. ET, HBO).

“I’ll see clips,” he said. “If I’m in them, I’m sure I’ll see them. Those guys will tell me if I do something stupid or something. You guys will make fun of me on Twitter.”

Coach Dan Campbell said he isn’t expecting much from the first episode regarding how it could change the perception of the team.

“Honestly, I’m not even worried about it,” Campbell said. “… I’m not worried about winning ‘Hard Knocks.’ I’m just worried about trying to get this team better and see if we can win some games here, which is the whole point of this.” — Eric Woodyard

Philadelphia Eagles: With DeVonta Smith out with a groin injury, it’s mostly been the Jalen Hurts/A.J. Brown show at camp of late. But receiver Quez Watkins is a name to keep in mind. Hurts was firing his way Tuesday, including on a pass down the left side that Watkins made a diving catch on.

It’s no secret that coach Nick Sirianni plans to run the offense through Brown, Smith and tight end Dallas Goedert, but Watkins will be in the mix.

“We know how vital Quez Watkins is to this offense and the speed that he brings to this offense,” Sirianni said. “That’s been an emphasis the last couple days in practice, making sure we are getting Quez going and seeing him with the ball in his hands.” — Tim McManus

Top NFL news of the day

Roquan Smith requests trade from Chicago Bears: Linebacker Roquan Smith said in a written statement that he has requested a trade after contract negotiations between himself and the organization reached an impasse. Smith wrote in a statement that was posted to social media by NFL Network that the “new front office regime doesn’t value me here,” after Smith said he had been trying to work on an extension since April.

New York Jets say Mekhi Becton’s season likely over because of knee injury: Starting right tackle Mekhi Becton’s season is “more than likely” over because of a knee injury, which he suffered in Monday’s practice, coach Robert Saleh said. The coach said he feels “sick” for Becton, who has a chip fracture to his right knee. He also defended Becton against the “shade” he has received on social media.

“His story’s not over. He’s got full support of this organization,” Saleh said.

Becton is scheduled to get a second opinion on Wednesday.

Jeff Zgonina, who played one season with Mills’ father in the NFL, will replace him. Zgonina had served as Mills’ assistant the past two seasons. Rivera didn’t elaborate on what he meant by a philosophical difference, but said it was “just some observations. I just felt it was a change I needed to make.”

Mills had been with Rivera since he was hired as Carolina’s head coach in 2011.

Philadelphia Eagles’ Jason Kelce has ‘routine’ elbow surgery: Veteran center Jason Kelce had elbow surgery as part of a “routine cleanout,” the team announced. Kelce decided to have the procedure after trying to work through some lingering discomfort. There is no official timetable for his return to play, though a league source indicated it was realistic that he will be ready for the season opener against the Detroit Lions on Sept. 11.

The 34-year-old Kelce has started 122 consecutive games, the longest active streak in the NFL among centers. Rookie Cam Jurgens, a second-round pick out of Nebraska, has been getting second-team reps during training camp and is listed as the backup on the unofficial depth chart.

Cincinnati Bengals rename home Paycor Stadium: The facility formerly known as Paul Brown Stadium will now be called Paycor Stadium, the team announced Tuesday. The Bengals sold the stadium naming rights to Cincinnati-based Paycor, a company that specializes in human resources software. The agreement is for 16 years. Financial terms were not disclosed.