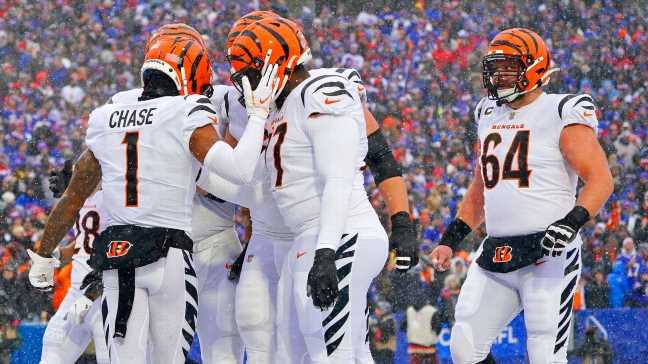 ORCHARD PARK, N.Y. — The Cincinnati Bengals are headed back to the AFC championship game.

The defending conference champions showed why they might be the best team in the AFC for the second straight year, defeating the Buffalo Bills 27-10 in the divisional round to set up another title tilt against the Kansas City Chiefs.

Sunday’s game in Buffalo was Cincinnati’s most commanding playoff performance over the past two years, including its run to the Super Bowl last season. It was a further indicator that this year’s Cincinnati team is better than the one that fell 23-20 to the Los Angeles Rams in Super Bowl LVI last February.

Cincinnati never had a chance to stake its claim as the AFC’s top seed in the regular season. But the Bengals underscored their merits in Buffalo.

Troubling trend: Cincinnati has to be concerned about the future of its offensive line. Bengals center Ted Karras appeared to play through an undisclosed injury during the game. The television broadcast indicated Karras had a right knee issue, but he fought through it to finish the game. The Bengals can’t afford to lose any more offensive linemen. Cincinnati started Sunday’s divisional game with three reserves starting. If Karras goes down, too, that leaves rookie left guard Cordell Volson as the only Week 1 starter on the unit. There is some solace for Cincinnati’s offensive line, however. Even with the backups in the fold, the Bengals ran the ball effectively and did a good job of protecting Burrow throughout the game.

QB breakdown: This was one of the best playoff performances of Joe Burrow’s young career. He was 23-of-36 for 242 yards and two touchdowns and completed his first nine passes of the game. Even some of the incompletions, including a would-be touchdown throw to Ja’Marr Chase that was nullified, were impressive. Burrow took the underneath throws when available and scrambled to get yards if needed. He also passed Ken Anderson for the most postseason passing yards in franchise history and helped Cincinnati maintain a comfortable lead over Buffalo for nearly the entire game.

Describe the game in two words: Dominating performance. Cincinnati went on the road, in snowy conditions, with reserves along the offensive line, and never looked troubled against the Bills. The Bengals were 6-point underdogs in the hours leading up to kickoff, according to Caesars Sportsbook. In one of the NFL’s most raucous environments, the defending AFC champions showed why they are one game away from returning to the Super Bowl.

Underrated statistic to know: With Buffalo’s defense determined not to allow Cincinnati any big plays, sustaining offensive drives was imperative to the Bengals’ success. Cincinnati converted five of its first eight third downs, which played a massive role in the team’s ability to play with a lead. They had 30 in the game. — Ben Baby

There wasn’t one moment or one play that ended the Bills’ season. Instead, the Bills were outplayed from start to finish in all three phases, finishing a season that started with such promise — as the Super Bowl favorites — in blowout fashion.

The team’s first home playoff loss under coach Sean McDermott put the weaknesses’ the Bills have been dealing with all season on full display.

The defense was unable to take advantage of an injured offensive line, while the Bills offense failed to put together drives consistently, looking out of sync and overwhelmed with mistakes frequent. Quarterback Josh Allen didn’t turn the ball over until the very end of the game, as has been an issue for Buffalo as of late but didn’t seem comfortable all game behind an offensive line has struggled. Once again, wide receiver Stefon Diggs was not able to consistently become part of the game plan, finishing with four receptions on 10 targets.

While the defense was dealing with injuries, the unit had no answer for slowing Burrow, and the Bengals went up and down the field with ease.

On the biggest of stages, a team that has set the Super Bowl as the clear end goal looked far from it, almost looking unprepared for the moment.

They now go into the offseason with a variety of questions to answer, including key free agent decisions to be made on defense, help needed on the offensive line and at wide receiver and question marks about the team’s building at defensive end.

Troubling trend: Struggles of the Bills defensive line. Against an offensive line missing two starters, the Bills defensive line struggled to control the line of scrimmage. In the first half, the Bengals gained 275 yards, the most yards the Bills have allowed in either half this season with 90 of those coming on the ground. It was the second-most rushing yards the Bengals had before the half this season and more than they had in the first half in any of their previous four games total. Burrow was sacked only once and pressured on seven dropbacks. While the Bills were missing starting defensive tackle DaQuan Jones, the inability to generate a pass rush or stop the running is concerning for a group the Bills have invested so much in over the last couple years.

Biggest hole in the game plan: The entire offensive game plan. There’s no excuse for how a healthy Bills offense performed against the Bengals. An early 14-0 deficit didn’t help, but the Bills were plagued by poor play all over, from the playcalling to the offensive line not giving Allen enough time to drops by wide receivers. The Bills were not able to take advantage of Allen’s ability to scramble with him limited to only one pass outside of the pocket on three attempts through the first three quarters. The weakness of the Bills offensive line was on full display and the unit just looked out of sync. — Alaina Getzenberg

Underrated statistic to know: The Bills are just 1-6 (lone win: Jan 9, 2021 against the Colts) in their playoff history when their opponent does not commit a turnover, which the Bengals did not. The Chiefs did not turn the ball over in last year’s divisional playoff matchup.