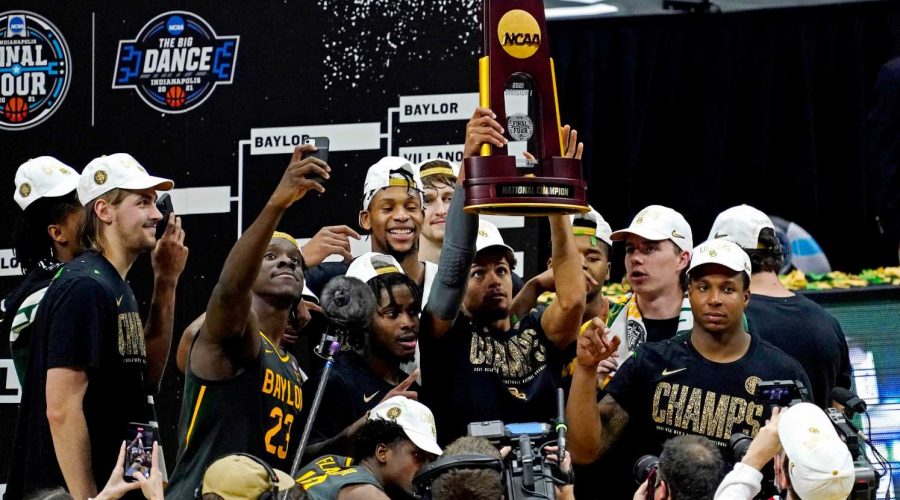 The Bears, the unanimous top choice of the 32 panelists, conclude the season where they began it. Baylor edged out Gonzaga by two points in the preseason poll, though Gonzaga would hold the top spot for much of the season. But the Bears’ emphatic 86-70 victory against the Bulldogs in Monday night’s title game makes them the first team to bookend the season with the No. 1 ranking since North Carolina accomplished the feat in 2008-2009.

Baylor players celebrate after beating the Gonzaga in the national championship game during the Final Four of the 2021 NCAA Tournament at Lucas Oil Stadium. (Photo: Robert Deutsch, USA TODAY Sports)

Gonzaga is the unanimous No. 2 choice after having its bid for perfection snapped by the Bears. Houston, Baylor’s other victim in the Final Four, lands at No. 3 in the final rankings.

UCLA, which was unranked before its impressive First Four to Final Four run that ended in an instant classic loss to Gonzaga, was voted No. 7 behind regional finalists Michigan, Alabama and Arkansas.

Illinois, ranked second heading into the tournament, falls to No. 8 in the final balloting after falling victim to Loyola-Chicago in the second round. The Ramblers land at No. 12 after their Sweet 16 appearance. Southern California and Florida State round out the top 10.

Baylor heads a list of five Big 12 members ranked in the final poll, though the next highest is Kansas at No. 16. The Big Ten also has five Top 25 squads despite overall disappointing tournament results. The Pac-12, which made up a quarter of the Sweet 16, also finishes with five ranked teams as Colorado hangs on at No. 23. Oral Roberts did not crack the Top 25 despite its surprising regional semifinal appearance as a No. 15 seed.