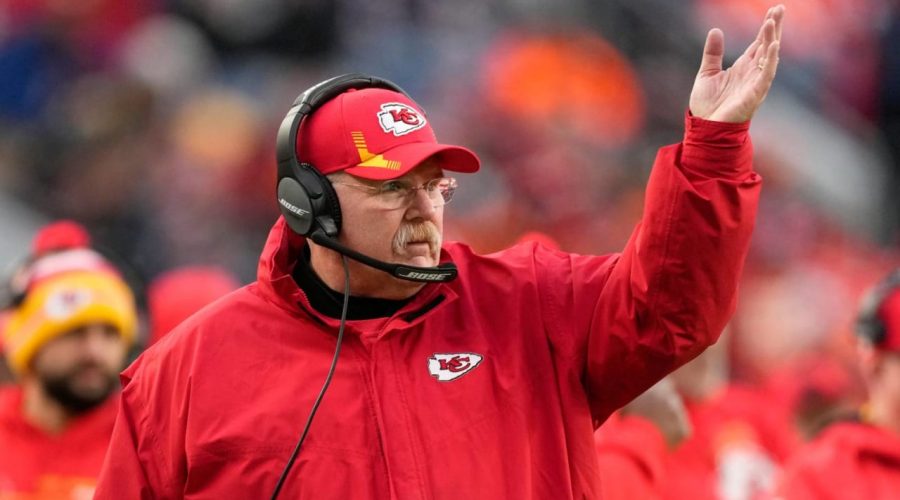 The finish to the most thrilling Divisional Round in ages might have been the only letdown from the entire weekend.

An almost unbelievable shootout ended in a fashion that became predictable as soon as Josh Allen﻿’s “tails” call failed. This wasn’t an audible, but was the Buffalo Bills’ choice in the overtime coin toss. It landed heads, giving the Chiefs the choice to receive and prompting a victorious roar from the Kansas City faithful at Arrowhead Stadium.

Patrick Mahomes promptly led the Chiefs on an eight-play, 75-yard scoring drive that took less than five minutes and ended in an eight-yard touchdown pass to — who else? — Travis Kelce﻿. The Chiefs were headed back to the AFC Championship Game, while the Bills were again going home thanks to a loss in Kansas City.

The immediate discourse online: The Bills should have gotten a chance to respond. After all, they’d traded haymakers in the game’s final two minutes at a higher rate than any postseason game in the league’s 102-season history. No playoff contest had ever seen three go-ahead touchdowns scored in the final two minutes of the fourth quarter — until Sunday. Why not keep the fun going?

“I had a chance to talk with (Bills coach) Sean (McDermott) afterward,” Reid said, via the Associated Press, “and that I’m sure is something they’re going to look at again, too. And I wouldn’t be opposed to it — it’s a hard thing. It was great for us last night, but is it great for the game which is the most important thing we should all be looking out for? To make things equal, it probably needs to be able to hit both offenses, both defenses.”

Reid is empathetic because his Chiefs were in the Bills’ shoes a few years ago. Kansas City took the dynastic New England Patriots to overtime in the AFC Championship Game at Arrowhead in the 2018 season, but never gained possession, allowing New England to cover 75 yards on 13 plays and in almost the same exact amount of time (4:52). Kansas City responded in the offseason by proposing to change the overtime rules to “allow both teams the opportunity to possess the ball at least one time in overtime, even if the first team to possess the ball in overtime scores a touchdown.” Their proposal also included the elimination of the overtime coin toss, awarding possession choice to the team that won the coin toss to start the game.

The proposal did not produce a change. The Chiefs ended up on the beneficial side of such a situation Sunday.

Bills hero Gabriel Davis caught four touchdown passes in the game, lighting up the scoreboard and giving Buffalo new life on two occasions in the game’s final two minutes. He appeared on Good Morning Football on Tuesday and acknowledged that while he’d be in favor of a rule adjustment, he wouldn’t be stumping for a change had the Bills won the coin toss.

“That’s a hard question. If the coin toss comes our way, it’ll definitely be a different kind of outcome,” Davis said. “Basically, it was a game of who wins that coin toss based on how both the offenses were moving. If they do change the rules, it would be something that I definitely would not be against (given) what happened to us on Sunday night. But at the end of the day, if it was us on the other side of that coin toss, I wouldn’t be arguing the results.”

There’s a legitimate response to this discussion, which can be seen coming from the moment a game ends regulation in a tie: Play better defense.

There was a time not too long ago in which overtime could end with nothing more than a field goal. Sudden death incentivized winning the coin toss and picking up a few yards at a time, with the goal being simple: get into your kicker’s range and hope he comes through.

The league knew this to be the case and attempted to make overtime more competitive (and more interesting) by adjusting its extra period to require a touchdown to immediately end a postseason game in 2010, with the rule taking effect in all games in 2012. Settle for a field goal, and the other team gets a chance to respond.

The goal then shifted for the teams that lost the coin toss: Instead of desperately attempting to hold the last line of defenses somewhere around the 35 yard line, they just needed to prevent the opposing offense from scoring a touchdown.

But in the playoffs, coin toss winners are 10-1, winning 90.9 percent of overtime contests. Seven of the 10 winners scored the sudden-death touchdown on the opening drive. New Orleans was the only team to lose, falling to the Rams in 2018, and that game had its own share of controversy in regulation.

There are two sides to the overtime argument that arises every time a thrilling game is decided on the opening possession of the fifth quarter. In one corner stands your aggressively vocal complainers about the current format, which they believe does not produce a level playing field when a coin toss determines who gets the ball first. In the other corner: the Get a Stop club, which believes there’s still value and purpose in a football team’s defense. Get a stop and earn your possession. Do your job. They’ve even lowered the bar enough for a field goal to qualify as a stop, requiring only an equivalent response to keep the game going.

One important difference exists in the postseason, which might explain the change in overtime records for coin toss winners. At the end of a regular season that is now 18 weeks, it takes an incredible amount of human endurance to find the strength and energy to play an extra quarter. Sprinkle in a shootout, and you’ll end up with a couple of gassed defenses, leading to a nearly effortless march to a touchdown like the one the Chiefs completed Sunday night.

Perhaps the league should make an adjustment to fix the playoff overtime format. After all, unlike in the regular season, we don’t accept ties in the postseason; they’ll just play and play and play until someone can break the tie. Conversely, there was no reason for the slog that was Lions-Steelers in Week 10 to begin a second overtime. There’s precedent for different overtime rules between regular and postseason.

This debate won’t go away any time soon, not as long as overtime continues to exist in postseason play and near-equal teams battle beyond the end of the fourth quarter. Bills tackle ﻿Dion Dawkins﻿ was quick to bury the current rules after his team lost.

“We should never let a football game be determined from a coin,” Dawkins said, per AP. “Like, I think that’s the most craziest rule in sports. Like, you can fight your entire fight the whole game, and then the game comes down to a 50-50 chance of a coin toss. Like, this ain’t Vegas. Like, we’re not at the casino table. Like, this ain’t no 50-50 bet and there ain’t even no 50-50 bet. And it’s just crazy that that was the outcome.”

It’s unlikely a change would resolve the debate. Even college football, which awards possession to each team from the opposing 25 and turns off the clock, deemed it necessary to raise the level of difficulty by forcing teams to go for two following overtime touchdowns this season.

But as we know, football isn’t determined by a coin toss. There’s still a game to be played. How it’s played ends up mattering most — not the rulebook.

January 25, 2022 NFL Comments Off on Andy Reid empathizes with Bills after overtime loss: 'I wouldn't be opposed' to OT rules change
NFL News