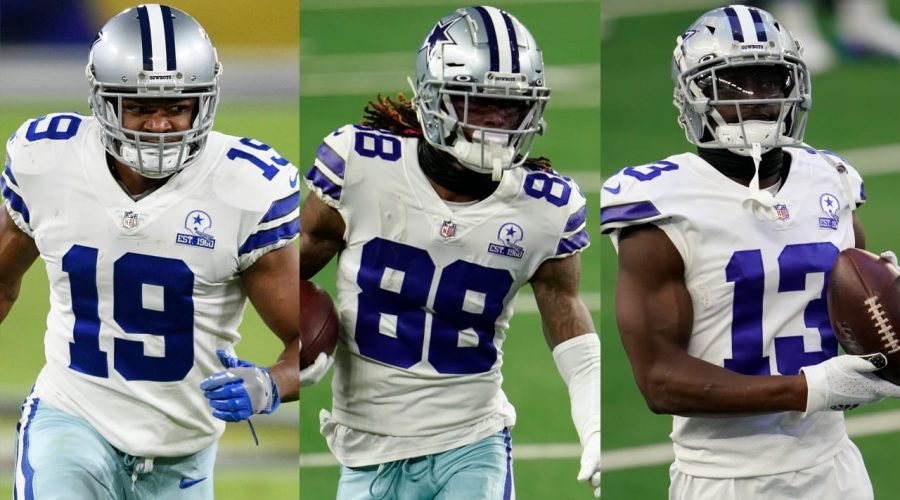 While NFL teams search high and low for more depth at the offensive skill positions, few have the luxury of having more than enough star power. Just look at most of the Tampa Bay Buccaneers’ position groups. How will Bruce Arians get everyone involved? And who’ll get the most action?

Below, I look at eight of the most crowded position groups across the league and offer my predictions, listing each group’s players based on projected touches (from most to fewest).

The Bears saw ﻿﻿﻿﻿﻿Andy Dalton﻿﻿﻿﻿﻿ as their starter when they signed him back in March, and head coach Matt Nagy has been sticking to that story in recent weeks. However, I expect to see Justin Fields on the field sooner rather than later. Maybe not in Week 1, but most likely by Week 4. In my opinion, Fields was the most NFL-ready quarterback of the 2021 draft class and he’ll immediately boost the pass and run games. He has better arm talent than a lot of people give him credit for, but it’s his athleticism that will take the offense to the next level. A QB who can run a 40-yard dash in the mid-4.4s will move the chains more often than not when this Bears offense gets into some dicey situations. And ﻿﻿﻿﻿﻿Nick Foles﻿﻿﻿﻿﻿, well, I’m not so sure he’ll still be on this roster come the start of the season.

Even if ﻿﻿﻿﻿﻿﻿﻿﻿﻿﻿﻿Amari Cooper﻿ misses the start of training camp with an ankle injury, I still expect him to be the No. 1 wide receiver for ﻿﻿﻿﻿﻿﻿Dak Prescott﻿﻿﻿﻿﻿﻿. Cooper is a great route runner and one of the toughest players to cover when he’s at his best, as evidenced by his back-to-back 1,100-yard campaigns in his two full seasons in Dallas. Coming off a rookie campaign that saw ﻿﻿﻿﻿﻿﻿CeeDee Lamb﻿﻿﻿﻿﻿﻿ nearly crack 1,000 receiving yards, he has his his popcorn ready and is poised to make a jump in Year 2. Lamb is the most versatile wideout on the roster. He can play on the perimeter, in the slot and make plays on reverses and jet sweeps.

﻿﻿﻿﻿﻿﻿Michael Gallup﻿﻿﻿﻿﻿﻿ has the ability to be a No. 1 receiver but is somehow still underrated. He’s improved in each of his three seasons and will be a close third in terms of targets behind Lamb. The Cowboys’ offense is absolutely loaded with talent and there’s only one ball to go around. ﻿﻿﻿﻿﻿﻿Cedrick Wilson﻿﻿﻿﻿﻿﻿ will have to make the most of his opportunities with a pair of first-round wideouts and two-time rushing champion Ezekiel Elliott, who’ll get his usual 250-300 carries, receiving the bulk of the workload.

We could see a lot of different scenarios play out in Houston, but I’m riding with ﻿﻿﻿﻿Mark Ingram﻿﻿﻿﻿ as the starter due to his familiarity with head coach David Culley, who coached Ingram with the Ravens for the past two seasons. Ingram has been a productive running back for the past decade. ﻿﻿﻿﻿Phillip Lindsay﻿﻿﻿﻿, who mutually agreed to part ways with Denver this offseason, will also get a decent-sized role in this offense. The fourth-year pro has a dogged mentality and the determination to find success no matter the situation. David Johnson can do everything, but he had a chance to be the guy in Houston last year and didn’t do much with it (147 carries, 691 yards, six TDs in 12 games). Expect his touches to be limited along with ﻿﻿﻿﻿Rex Burkhead﻿﻿﻿﻿‘s. The former Patriot could see some action on third down and between the tackles.

I believe the Jaguars have two true No. 1 wide receivers in ﻿﻿﻿﻿Laviska Shenault Jr.﻿﻿﻿﻿ and ﻿﻿﻿﻿D.J. Chark﻿﻿﻿﻿. However, I expect Shenault will get more action in 2021 because he’s the more dynamic player with the ball in his hands and can be used in a Percy Harvin-like role on reverses and fly sweeps. Chark can run every route and should be a favorite target of rookie QB Trevor Lawrence. There’s a very good chance Chark notches his second 1,000-yard receiving season with Lawrence operating Urban Meyer’s offense. ﻿﻿﻿﻿Marvin Jones﻿﻿﻿﻿ has the tools to be a WR2 and should continue to be the touchdown monster he was in Detroit (he’s logged nine receiving TDs in three of last four seasons). With Shenault, Chark and the 1-2 punch of first-round pick Travis Etienne and James Robinson at running back, expect Jones to find ways to get open for chunk plays (keep an eye on Etienne at receiver, too). Phillip Dorsett is a deep threat who will stretch and open the field for the unit’s most talented playmakers.

We’re about to see the best version of Sean McVay’s offense. ﻿﻿Robert Woods﻿﻿ is going to be ﻿﻿Matthew Stafford﻿﻿‘s go-to guy as a target who’ll get open no matter where he lines up. Hovering right around 130 targets in each of the last three seasons, Woods (and his fantasy football owners) shouldn’t expect to see a drop-off this fall. If Woods is Option 1A, ﻿﻿Cooper Kupp﻿﻿ is 1B. Both guys have been reliable playmakers for the Rams. They make defenses pay with their ability to get open. ﻿﻿Van Jefferson﻿﻿ could see more action in his second season now that he’s familiar with the system. The 6-foot-1 wide receiver will be the big target for Stafford on the outside and a chunk-play guy. One area where the Rams should improve is deep after signing ﻿﻿DeSean Jackson﻿﻿ and drafting ﻿﻿Tutu Atwell﻿﻿ this offseason. The veteran will get the first opportunity to be McVay’s field-stretcher, with the rookie waiting in the wings.

﻿﻿﻿﻿Jonnu Smith﻿﻿﻿﻿ will be the guy at tight end for New England. He can line up anywhere (tight end, fullback, wide receiver) and is a dynamo with the ball in his hands, which makes him a great fit for the type of role Aaron Hernandez once played in the Patriots’ offense. Smith isn’t the biggest guy, but he’s a smooth route runner who takes advantage of mismatches. ﻿﻿﻿﻿Hunter Henry﻿﻿﻿﻿ fills the void left by ﻿﻿﻿﻿Rob Gronkowski﻿﻿﻿﻿ as the Y tight end, if he can stay healthy. My NFL Network colleague Mike Giardi reported Henry appeared to injure his lower leg during a 7-on-7 period at Patriots minicamp on Thursday. Fortunately, NFL Network Insider Ian Rapoport reported later that the injury is not serious. Henry, who has missed 24 games over the past four seasons, needs his body to cooperate. He has a chance to rival Smith in targets and touches if he’s available. These two will be major players as big, reliable targets for whoever is under center.

A close third in the pecking order is my guy from UCLA, ﻿﻿﻿﻿Devin Asiasi﻿﻿﻿﻿, who had a tough rookie season (two catches, 39 yards, one TD in nine games). He started to come on late last season and should take a sizable leap in Year 2. ﻿﻿﻿﻿Dalton Keene﻿﻿﻿﻿ is another promising young tight end who could work his way onto the field in 2021. Both of these guys have no choice but to get better with the competition added this offseason, so we’ll see who rises to the occasion.

﻿﻿Evan Engram﻿﻿ has been a playmaker and chain mover for the Giants. The rapport he’s built with ﻿﻿Daniel Jones﻿﻿ over the last two years should make him the top target at the position. The Kelvin Benjamin experiment could pay off in a big way. The 6-foot-5, 245-pound pass catcher will be a matchup problem for most linebackers with his size and route-running ability. He could be utilized similarly to how the Raiders deploy ﻿﻿Darren Waller﻿﻿ — although Benjamin can’t match Waller’s combination of speed and athleticism. ﻿﻿Kyle Rudolph﻿﻿, a vet who spent the last decade-plus with the Minnesota Vikings, should be a red-zone favorite. He’s always been reliable near the goal line, routinely finding ways to get open and win the contested catch. The New York Giants could have a situation where Engram leads the position group in yards, with Benjamin first in catches and Rudolph No. 1 in TDs.

﻿﻿Mike Evans﻿﻿ has logged seven consecutive seasons with 1,000-plus receiving yards, so yeah, I’d say it’s safe to slot him in as ﻿﻿Tom Brady﻿﻿‘s top target. Evans routinely wins battles thanks to his size, speed, body control and hands. ﻿﻿Chris Godwin﻿﻿ is another big-bodied receiver who’ll get his opportunities after having a 77.4 percent catch rate (highest of any Bucs WR) in his first season with Brady. ﻿﻿Antonio Brown﻿﻿ is poised for a big year after being a force in Tampa Bay’s Super Bowl run. Brown’s production should see an increase now that he’ll have a full offseason with the team. That leaves Tyler Johnson and Scotty Miller. Johnson could have a limited role behind Brown, while Miller could again see several big-play opportunities considering the Bucs’ desire to push the ball downfield.

June 11, 2021 NFL Comments Off on 2021 NFL season: Who'll get the most touches from loaded position groups?
NFL News