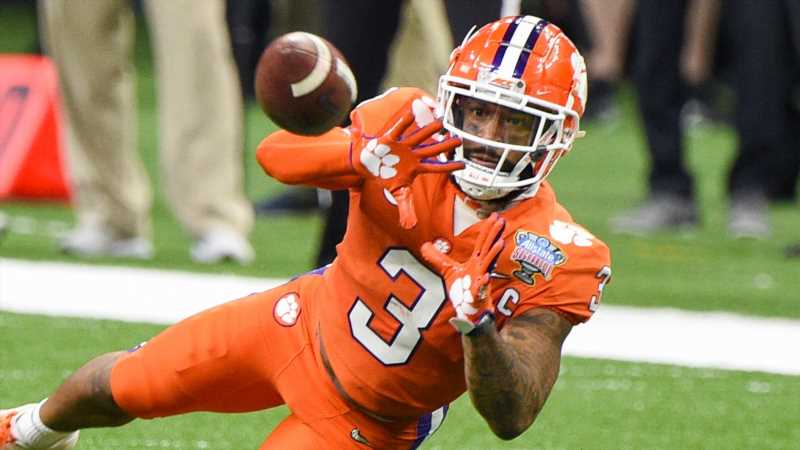 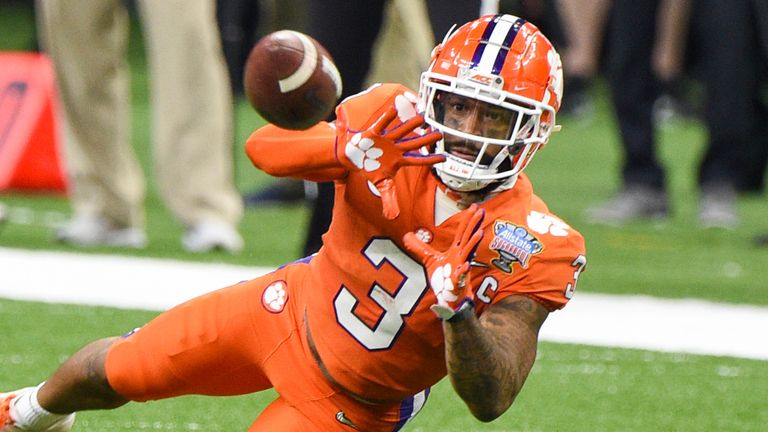 In a week where the future of quarterback Aaron Rodgers was thrust into the spotlight, it seemed only too fitting that the Green Bay Packers would turn to his namesake Amari Rodgers as their eagerly-awaited wide receiver pickup at the 2021 NFL Draft.

Green Bay acquired the No. 85 overall pick from the Tennessee Titans in exchange for the No. 92 and No. 135 selections to move up and make Clemson’s Rodgers their fourth-highest drafted receiver since Aaron Rodgers was named starter in 2008.

The Tampa Bay Buccaneers, Minnesota Vikings and Houston Texans were among those to cast an eye towards the future as all three selected quarterbacks, the Chicago Bears recruited immediate protection for Justin Fields, the New York Jets supplied Zach Wilson with a new weapon, and the Denver Broncos claimed one of the top running backs on the board. 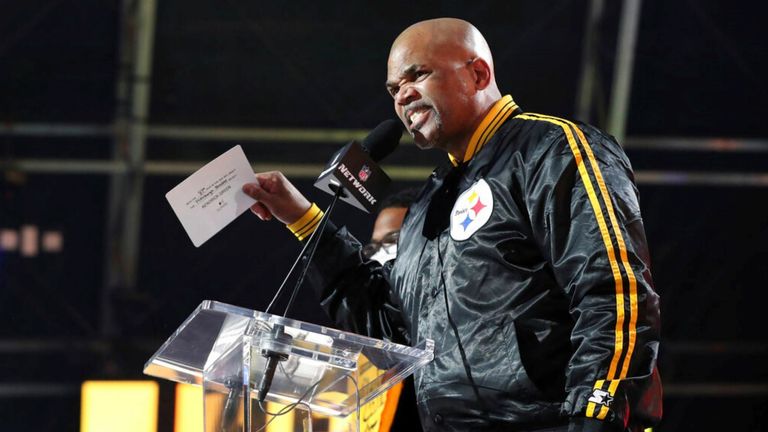 Having officially unveiled quarterback Trevor Lawrence as the No. 1 overall pick on day one, the Jacksonville Jaguars opened Friday night by taking Georgia cornerback Tyson Campbell with the first pick of round two, during which they also welcomed Stanford offensive tackle Walker Little (No. 45) and Syracuse safety Andre Cisco (No. 65).

With the third pick of the evening, the Denver Broncos sought a replacement for Phillip Lindsay and a new backfield partner for Melvin Gordon by snapping up North Carolina’s bruising running back Javonte Williams.

Two of the nastiest offensive linemen on the board fell shortly after as the Philadelphia Eagles invested the 37th overall selection in Alabama’s interior bulldozer Landon Dickerson, before the Bears snapped up Oklahoma State tackle Teven Jenkins at No 39.

The Miami Dolphins and Cincinnati Bengals also made sure to strengthen the protection for their young quarterbacks Tua Tagovailoa and Joe Burrow by clinching Notre Dame tackle Liam Eichenberg and Clemson guard Jackson Carman at No. 42 and No. 46 overall, respectively. 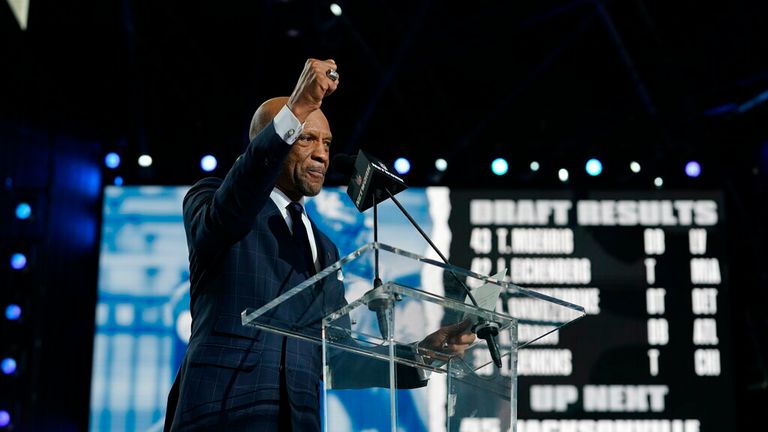 Defensive tackle Christian Barmore became the latest member of Alabama’s National Championship-winning side to fall when the New England Patriots traded up to secure his services at No. 38, before Florida State cornerback Asante Samuel Jr., son of the former two-time Super Bowl champion, was made a Los Angeles Charger at No. 47.

After trading back for the first time in nine Drafts on Thursday, New York Giants general manager Dave Gettleman evidently got a taste for it as he moved back to No. 50 to lock in Georgia edge rusher Azeez Ojulari.

Notre Dame linebacker Jeremiah Owusu-Koramoah, who many touted as an early first-rounder, finally found a suitor in the Cleveland Browns at No. 52 in one of the potential steals of the night, and the Pittsburgh Steelers made Penn State’s Pat Freiermuth the second tight end off the board at No. 55. 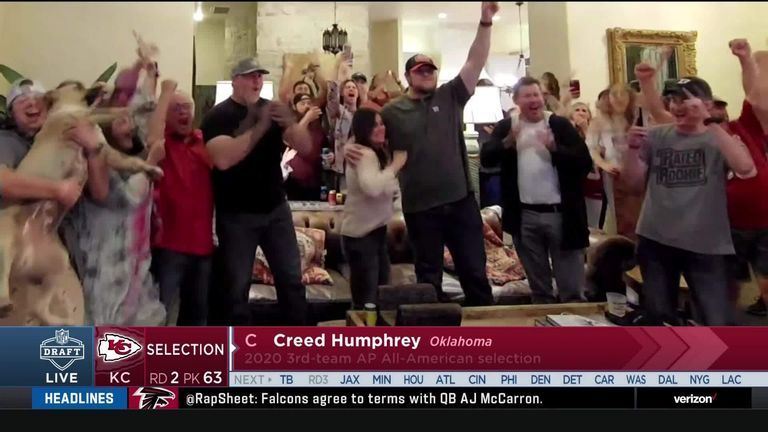 Among other notable moves, the Bengals added Texas pass rusher Joseph Ossai at No. 69, the San Francisco 49ers grabbed Ohio State running back Trey Sermon at No. 88, and the Tennessee Titans rounded off the top 100 with intelligent Washington safety Elijah Molden.

Joe Douglas and the Jets showed no hesitation in arming No 2 pick Wilson with another target as they turned to gifted Ole Miss technician Elijah Moore at 34th overall, before the Arizona Cardinals recruited Purdue’s explosive do-it-all Rondale Moore with the 49th pick.

The Seattle Seahawks evidenced their need to speed with the No. 56 selection by complementing DK Metcalf and Tyler Lockett with Western Michigan’s chunk-play merchant D’Wayne Eskridge, who interestingly played at cornerback in 2019, and the Los Angeles Rams followed a similar route immediately after by turning to the services of Louisville’s Tutu Atwell.

Panthers second-year head coach Matt Rhule ended a run of eight straight defensive Draft picks dating back to 2020 when Carolina responded to the offseason loss of Curtis Samuel by introducing the versatility of LSU’s rangy Terrace Marshall late in the second round.

Tennessee’s Josh Palmer was next off the board when he landed with the Los Angeles Chargers at 77th overall in the third round, followed by Dyami Brown to Washington at 82nd overall, with many having projected the North Carolina deep-threat as a round two talent.

Then came the Packers’ big moment, general manager Brian Gutekunst trading up to take Clemson’s Rodgers, a day after it was reported his reigning MVP quarterback did not wish to return to Green Bay this offseason.

There was still time for two more, Michigan’s Nico Collins heading to the Houston Texans and Auburn’s speedster Anthony Schwartz, who ran an unofficial 4.26 40-yard dash at his Pro Day, joining up with the Cleveland Browns.

Quarterbacks had dominated round one as three were taken in the first three picks, before the Bears traded up for Fields and the Patriots put their faith in Alabama’s Mac Jones. It raised the question heading into Friday: who would be next?

The Super Bowl champion Bucs provided an answer with the final pick of round two when they selected Florida’s Kyle Trask, who finished the 2020 season 301 of 437 passing for 4,283 yards, 43 touchdowns and eight interceptions while throwing to the likes of Kyle Pitts. His job? Proving himself as an eventual successor to Tom Brady.

A flicker of uncertainty loomed over the future of Kirk Cousins upon the second pick of the third round in light of the Minnesota Vikings making the call to Texas A&M quarterback Kellen Mond. He marked the first of four third-round picks for the Vikings, followed by North Carolina linebacker Chazz Surratt (No. 78), Ohio State guard Wyatt Davis (No. 86) and Pittsburgh defensive end Patrick Jones II (No. 90).

Mond recorded 2,282 yards passing for 19 touchdowns and three interceptions in 10 games in 2020, as well as 294 rushing yards for four scores from 74 carries.

The Houston Texans also got in on the act with the next pick, welcoming Stanford signal-caller Davis Mills, who played just 13 games in college.

Coverage of the NFL Draft continues on Sky Sports NFL on Saturday with rounds four to seven.