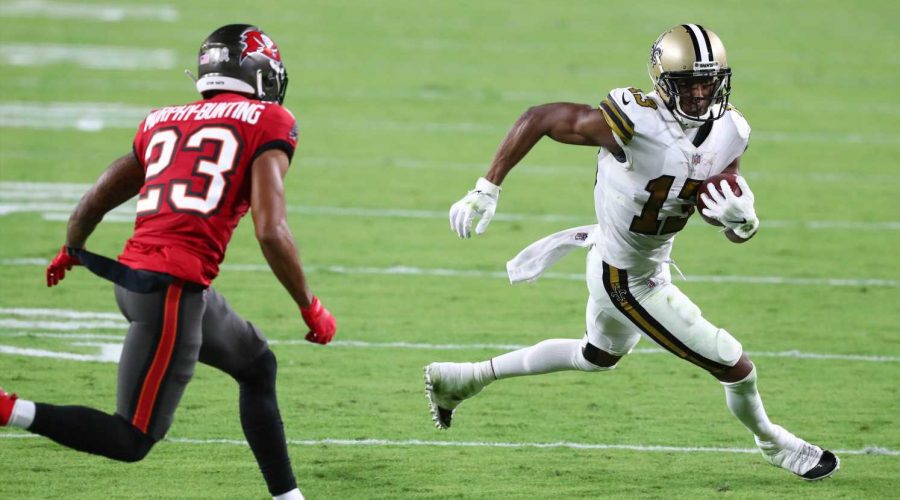 This season's NFL wild-card round will literally be like nothing we've ever seen.

Billed by the league as "Super Wild Card Weekend," the 2020 playoffs – the first to feature a seven-team bracket per conference – will kick off with an unprecedented pair of back-to-back postseason tripleheaders Saturday and Sunday. The competition should be typically fierce, and the two additional games should only further whet the appetites of football fans … while adding to the league's most valuable inventory of premium games heading into its next round of broadcast negotiations.

But the "Super Wild Card" as we lurch toward the kickoff of the Super Bowl LV tournament seems likely to be the unwelcome variable that has pervaded the country at large: COVID-19. The pandemic is already wreaking havoc as teams prepare for the biggest games of their season.

The status of Saints running back Alvin Kamara, who missed Week 17 while on the reserve/COVID-19 list, remains in question as New Orleans prepares to host Chicago on Sunday afternoon. Buccaneers linebacker Devin White (133 tackles, 9 sacks in 2020) probably won't play Saturday at Washington.

But no team has been hit harder than the Cleveland Browns, playoff participants for the first time since 2002. They will be without head coach Kevin Stefanski and Pro Bowl guard Joel Bitonio – the club's longest-tenured player – among others going into their Sunday night game in Pittsburgh.

"All of our guys that can’t be a part of this is disappointing to me," Stefanski said Wednesday, "but we have to find a way.

“They understand that we have a job to do, and they are excited to do that. They know that this thing is not stopping for me or anybody so they are full speed ahead."

Even if full speed ahead while the team is unable to practice so far at the facility, instead forced to prepare for Pittsburgh virtually.

It's part and parcel of what could be the wildest of wild-card weekends. So in keeping with that theme, virus concerns notwithstanding, here's one player for each club in action over the coming days who could be that X-factor, that joker, that – yep, wild card – who could make all the difference. 65664

One of the greatest receivers in the history of the league before personal issues sidelined him most of the past two seasons, AB is once again performing at an elite level. Over the past three weeks, he has caught 20 passes for 266 yards and four TDs as the Bucs' star-studded offense finally found an extended groove. His role may have to expand further Saturday night against Washington if fellow WR Mike Evans' knee injury doesn't allow for his playoff debut.

The fifth pick of the 2017 draft belatedly had a breakout season which should earn him some nice coin in free agency. More immediately, he's quite capable of making the Ravens pay if they focus too narrowly on RB Derrick Henry and WR A.J. Brown. Davis has done it before, piling up 113 yards on five catches in the Titans' Week 11 over Baltimore and catching a backbreaking TD from Henry in last season's playoff upset at M&T Bank Stadium.

The rookie from Central Florida is effectively QB Josh Allen's No. 3 receiver, but he may be this offense's premier big-play threat. Davis' 17.1 yards per catch lead the team, and his seven TD grabs trail only Stefon Diggs (8), who had 104 additional targets. The Colts have given up five TD passes of 20+ yards over the past four weeks.

The second-rounder only started once during his rookie year but has been the most effective back for Baltimore's top-ranked ground game – particularly late in the season. Dobbins' 805 rushing yards trail only QB Lamar Jackson among Ravens players, and his per-carry average of 6 yards was the highest of any running back in the league in 2020. The Ravens will surely need to establish the run early Sunday if they're to avenge last year's playoff loss to Tennessee.

The midseason acquisition has brought juice to a pass rush that desperately needed it. Dunlap has five sacks since joining Seattle after notching just one in the first half of the season with Cincinnati. And generating pressure could be key Saturday if star Seahawks S Jamal Adams (9½ sacks) can't fight through a shoulder injury at a time when the Rams are likely to get stalwart LT Andrew Whitworth (knee) back for the first time since Week 10.

This offense has largely – and capably – run through rookie RB Jonathan Taylor over the last six weeks. But keep an eye on speedy third-down back Hines, who leads the Colts with 63 receptions and scores in bunches – he has multiple TDs in three games this season. He could be a difference maker, especially given QB Philip Rivers' proclivity to dump the ball off to his backs.

One of the league's most versatile players, he actually had more carries (64) than catches (21) while toiling for one of the league's worst offenses. But Patterson's NFL legacy is as a return man, which is how he earned a spot on the 2010s All-Decade team. And he's off to a good start for the 2020s, leading the NFL with 1,017 return yards on kickoffs – including a 104-yard TD and a 29.1-yard average. The Bears may need another big special teams play – or two – if their defense can't bottle up the explosive Saints.

The 2013 defensive rookie of the year for the Jets, Richardson's star has faded during this itinerant phase of his career. But he's still a disruptor and one who will likely need to step up in the absence of injured DE Olivier Vernon (Achilles) – especially if Pittsburgh's struggling offensive line understandably commits resources to slowing DE Myles Garrett.

Though rookie Chase Young has commanded a great deal of attention, it was Sweat (a first-rounder himself in 2019) who led this team in sacks (9), quarterback hits (20) and tackles for loss (12). Washington's offense can't realistically be expected to keep pace with Tampa Bay's – unless Sweat, Young and Co., are able to bring the classic Tom Brady Kryptonite: pressure.

Admittedly, odd to classify a two-time All-Pro as a "wild card." But Thomas is currently a bit of an unknown commodity, an ankle injury costing him most of the regular season – one that ended prematurely when the Saints shut him down the past three weeks. Thomas, who caught a record 149 balls in 2019 but just 40 in 2020, has not yet been reactivated from injured reserve ahead of Sunday's game. But he's expected to play and may need to quickly recapture his chemistry with QB Drew Brees if Kamara is unavailable.

He doesn't garner much attention among the bigger names of Pittsburgh's big-play defense. Yet Tuitt's 45 hurries led the team, and his 11 sacks trailed only defensive player of the year candidate T.J. Watt. With Bitonio out, Tuitt and fellow linemen Cam Heyward and Tyson Alualu could create extensive havoc against Cleveland's typically outstanding blockers.

He's been every bit as good as more celebrated teammate Jalen Ramsey this season – and that's pretty important going into a playoff matchup with a Seattle offense that's been heavily reliant on WRs DK Metcalf and Tyler Lockett. If Williams can contain his assignment, likely Lockett, and Ramsey once again frustrates Metcalf, the Rams should have a legitimate shot – with or without injured QB Jared Goff – of being the rare visiting team to win a postseason game in the Pacific Northwest

January 7, 2021 NFL Comments Off on 2020 NFL wild-card weekend: One wild-card player to watch for all 12 teams in playoff opener
NFL News