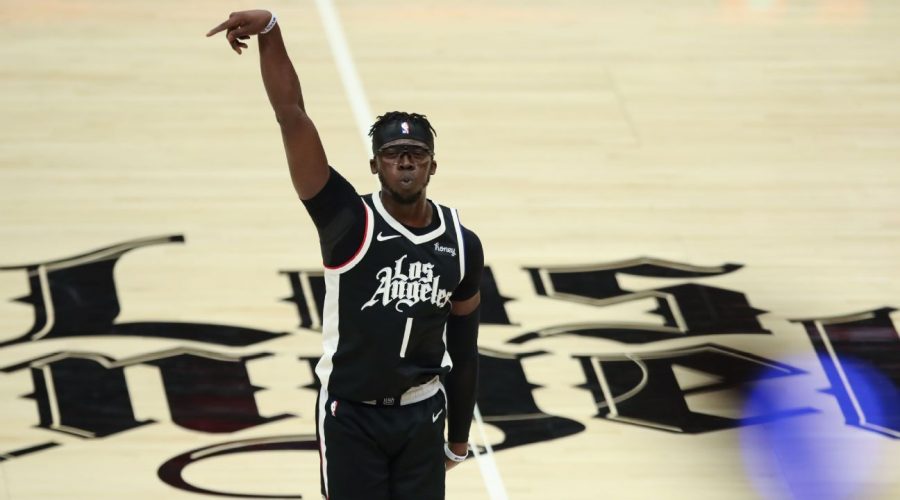 REGGIE JACKSON HAD spent enough time in Los Angeles over the years to have an idea of what he was signing up for when Paul George invited him out to a summer pickup game at his old high school in Palmdale, California.

The two friends had lived together at houses in the Hollywood Hills on and off for the past few summers, training together during the days, playing video games and going to dinners with friends and family at night.

But Palmdale is a bit of a drive from basically anywhere in Los Angeles — an hour and 20 minutes northeast with traffic luck — and another world from the scene in L.A.

“Once I got out of the city, it was just real Western out there,” Jackson says. “I kept trying to call Paul so he could direct me. But he was already on the court, so he didn’t pick up.”

Jackson kept driving though. Growing up in a military family, he had never really stayed long enough in a place to call it a hometown. But that only made him long for and appreciate a connection like George had with Palmdale even more.

When Jackson finally found the gym at Knight High School, the 10- to 15-person pickup game he had been invited to had turned into a spectator event after word spread over social media that George was in town hooping.

“It was cool just being in his city, walking around the neighborhood and seeing some of the areas where he grew up,” Jackson says of George. “That’s why I wanted to make the trip out there.”

Jackson had an entirely different childhood. He was born in Italy and then made stops in England, North Dakota, Georgia, Florida and Colorado. For college, he spent three years at Boston College. In the NBA, he has played in Oklahoma City, Detroit and L.A. But it’s this last stop, with George and the Clippers, where he finally seems to have found his NBA home.

In the first round of the Western Conference playoffs against the Dallas Mavericks, Jackson was a revelation, scoring 18.2 points a game after being inserted into the starting lineup in Game 3. In the second round against the Utah Jazz, he also averaged 18 points, but Jackson stepped it up to 24.5 points and 6.5 assists after Kawhi Leonard was lost to a knee injury in Game 4. In the conference finals against the Phoenix Suns, Jackson is averaging 21.5 points through the first four games.

Overall, the Clippers are plus-104 with Jackson on the court during these playoffs. And according to ESPN Stats & Information research, he is one of only three players in NBA history to hit at least three 3-pointers in 14 postseason games. The other two are Golden State Warriors stars Klay Thompson and Stephen Curry.

Jackson has always had the talent to perform at this level. The Pistons gave him an $80 million contract in 2015 because they believed in his talent. He just hasn’t been healthy enough or felt comfortable enough to shine like this.

“Honestly, this team has empowered me,” Jackson says. “I’ve gone through my career trying to make the right play and not necessarily just being myself and coming out and playing the game.

TRAVIS JACKSON KNEW his brother had found a home with the Clippers in late January. The Clips were on the road for a game against the Heat and playing without George and Leonard. Travis watches all of his brother’s games and knows how to read his emotions better than anyone. And against Miami, Reggie seemed locked in, determined to carry the team to a win without its injured superstars.

But in the fourth quarter, with the Heat rallying, Jackson made a monumental error. He called a timeout the Clippers didn’t have.

The look on Jackson’s face said everything. He knew instantly how big a blunder it was. But before the emotion overwhelmed him, Serge Ibaka ran over to console him. Then Lou Williams. Then Patrick Beverley. Then everyone on the bench.

July 2, 2021 NBA Comments Off on With the Clippers, Reggie Jackson feels like he has a place in the NBA
NFL News