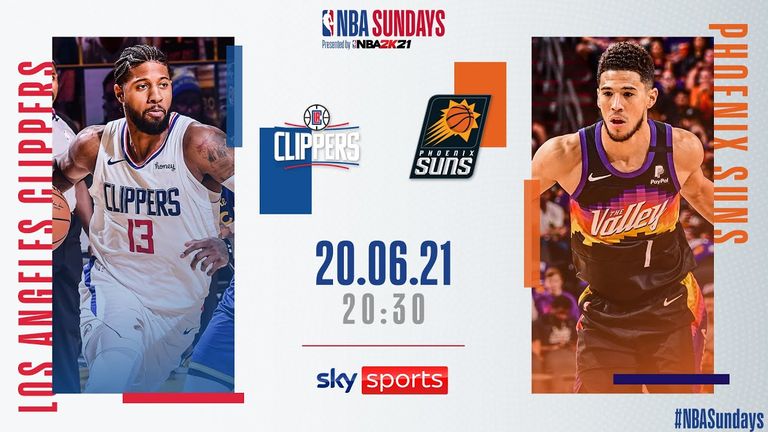 The Los Angeles Clippers ended one of the NBA’s most infamous droughts in epic fashion on Friday night.

Two days later, they have the chance to begin ending another drought — this time against an opponent also looking to make some long-awaited history.

A most unusual and unexpected Western Conference finals series is scheduled to tip-off Sunday evening at 8:30pm, when the Clippers head into unchartered territory by visiting the Phoenix Suns in Game 1 of the best-of-seven set.

The fourth-seeded Clippers advanced to the conference finals for the first time in their 51-year history on Friday night by mounting a stunning comeback to beat the top-seeded Utah Jazz, 131-119, in Game 6 of a conference semi-final in Los Angeles.

The second-seeded Suns have been off since June 13, when they completed a four-game conference semi-final sweep of the host Denver Nuggets with a 125-118 win.

The Clippers’ win Friday night was a cathartic one for a franchise that’s been perpetually star-crossed and nomadic since being founded as the Buffalo Braves in 1970.

The Braves made three straight Eastern Conference semi-finals from 1974-76 but didn’t win another playoff round for 30 years, a span during which they moved twice – first to San Diego, where the franchise was renamed the Clippers, and then to Los Angeles.

Prior to Friday, the Clippers were 0-8 all-time with a chance to win a conference semi-final series, including 0-3 last summer when they squandered a 3-1 lead against the Nuggets. Los Angeles looked sure to fall to 0-9 Friday, when the Jazz raced out to a 22-point halftime lead and extended the lead to 25 early in the third quarter.

But after Utah’s Donovan Mitchell hit a 3-pointer to open the second half, the Clippers mounted an 81-44 game-ending run, a span in which they shot a scorching 71.4 percent (30-of-42) from the field.

With Kawhi Leonard (right knee) out for a second straight game, the unlikely catalyst was Terance Mann, a 2019 second-round pick who scored 25 of his career-high 39 points in the second half. Mann entered Friday with 59 points in 25 career playoff games.

“It was just a special night,” said Clippers forward Paul George, who scored 28 points Friday. “You felt it – the cheers, the excitement. You felt the monkey [get] off of the Clippers’ back in terms of getting out of the second round.”

The Suns haven’t waited nearly so long to get to a conference finals – this will be the ninth trip to the NBA semi-finals for Phoenix, which reached the final four in 2010. A storybook season and pursuit of the first title for the 53-year-old franchise, however, grew complicated earlier this week when star point guard Chris Paul entered the league’s health and safety protocols.

“Because of the climate that we live, things change from day-to-day,” Phoenix coach Monty Williams said Saturday. “I try to take it one day at a time. I certainly understand the line of questions, but for me, based on the information and based on the history of this particular protocol, everything is day-to-day. So that’s how I have to approach it.”

Paul is the only NBA player placed in the protocol since June 9. The Suns, who made their last NBA Finals appearance in 1993, said on Saturday Paul remains in the protocol, which likely rules him out for Sunday’s series opener.

Cameron Payne is expected to start if the 36-year-old Paul can’t play.

Paul, who led the Clippers to six straight playoff berths from 2011-12 through 2016-17, helped Phoenix snap a 10-season postseason drought in his first season in Arizona. He averaged 25.5 points, 10.3 assists and 35.7 minutes per game in the sweep of the Nuggets.

“It’s next man up,” Suns forward Mikal Bridges said. “Everybody is ready to play.”