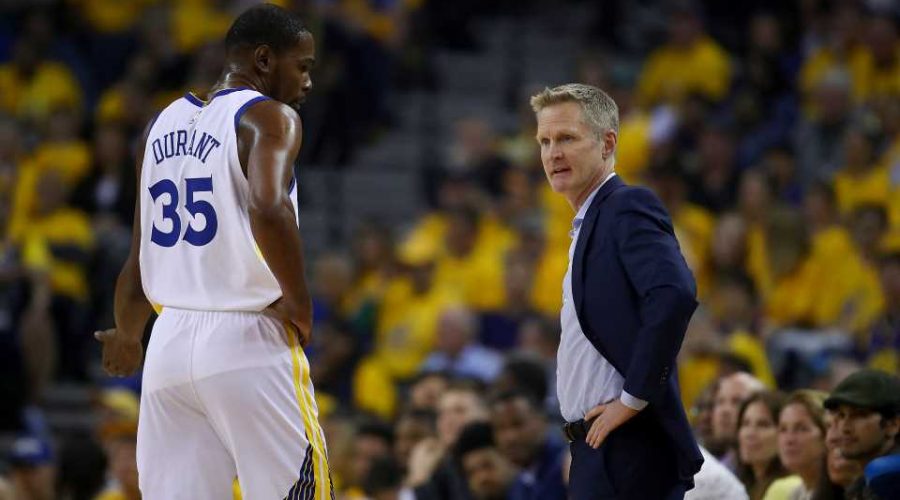 Warriors coach Steve Kerr spent a chunk of his pregame availability Monday being angry that a local media member appeared to remind people of the drama surrounding Kevin Durant’s final season with the team.

Kerr even referred to the member by name: Drew Shiller of NBC Sports Bay Area.  As to why Kerr was steaming over Shiller’s social media post, here’s the background:

Kerr said in an appearance on The Ringer’s “Real Ones” podcast with Raja Bell and Logan Murdock that he enjoyed coaching the Warriors’ 15-50 team in 2019-20 more than he did coaching Golden State’s 2018-19 Finals team. Shiller took Kerr’s quote and added the fact that Durant was on that Finals team, a shorthand way (whether intentional or not) of insinuating that Kerr was trying to say that KD, now with the Nets, was a problem.

Kerr, knowing what was already happening, responded in the meeting with reporters.

“I want to make this extremely clear: If you want to actually get the story accurate, I encourage you to listen to the podcast before we sort of take this story into offshoots and use that as my quote, because that is the furthest thing from the truth,” he said. “It was a terribly unfair shot, completely taking something out of context to the point where people are going to read it and think that that was my quote.”

“To take that comment and put it into a tweet and send it out into the universe was so irresponsible and damaging, and I’m angry,” he added. “And I know what’s going to happen. I know this is going to be taken out onto the morning shows and people are going to be talking about it, and they’re going to use what they think is a quote that is actually something that is completely made up. I’m not happy. I think it’s wrong.”

So, we took up Kerr’s suggestion and went to the audio. Here’s a transcript of what was said.

MURDOCK: “Is it harder to coach when you’re winning and in a dynasty or when you’re trying to build up something that could potentially be a dynasty? Which is the harder coaching job, in your eyes?” (Murdock, a former Warriors reporter, led into the question by referring to how intense the scene in Oakland had gotten by the 2017-18 season.)

KERR: “I think every year is different, and so it’s not as clear-cut as that. I would tell you, the first four years of our run, that coaching was way more fun just because we were joyful and everything was really simple and no agendas, and then that last year things kind of went haywire. And so, even though we went to The Finals, it was difficult. I enjoyed last season, when we had the worst record in the league, more than I enjoyed that last season when we went to The Finals because we had young guys last year who were trying every day, working hard, we had a great energy, great spirit, great camaraderie. And losing sucked, but what you want is a good vibe. You want to look forward to going to the gym every day and seeing everybody. And that last year was tough, it really was tough — the last year when we lost to Toronto in The Finals. There was just a lot going on that you guys . . . some that you know about, some that you don’t, and that was very difficult. Every year is unique and you try to enjoy each one for what it is.”

“Kevin is celebrated here, you guys all know that,” Kerr said Monday. “Had an amazing run, we absolutely wish him well, and we’ve done that from the start. And that’s why I’m so angry about this because it’s complete BS.”

Shiller had not addressed Kerr’s response on Twitter as of Monday night.