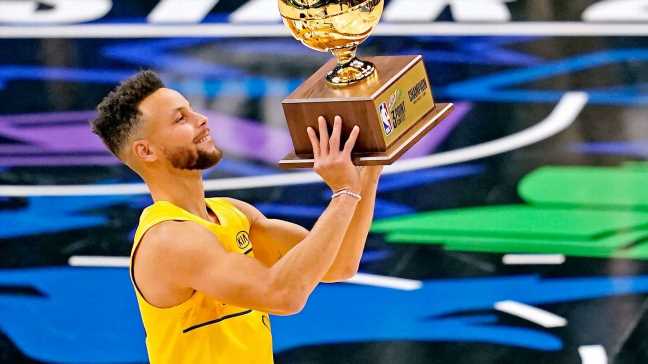 Curry scored 28 points in the final round of the 3-point contest, nailing his last money ball shot (worth two points) to beat Utah Jazz guard Mike Conley’s total of 27.

“I could hear whatever crowd was in here, I could hear the temperature rise a little bit,” Curry said when asked about his final shot on the TNT broadcast. “I knew I had to knock it down. It was a fun battle.”

Sunday marked Curry’s seventh 3-point contest, tying him with Dale Ellis for the second-most appearances in NBA history, behind only Hodges’ eight.

Curry had 31 points in the first round to lead the contest. Also advancing were the Boston Celtics’ Jayson Tatum, with 25 points, and Conley, who took injured Phoenix Suns star Devin Booker’s spot in the All-Star Game and 3-point contest, with 28.

All-Star Weekend was originally scheduled to be held at Sabonis’ home arena in Indianapolis, before the coronavirus pandemic forced the NBA to relocate the festivities to Atlanta.

Wearing his Pacers-themed jersey, Sabonis was able to overcome his second-place finish in the skills challenge a season ago.

“It was fun,” Sabonis said. “I wanted to come out and make sure I got it done this time.”

The skills challenge featured two guards — Dallas Mavericks star Luka Doncic and Phoenix’s Chris Paul — and four forwards/centers. Doncic and Paul each picked up a first-round bye, while the big men duked it out.

However, after Sabonis and Vucevic defeated the New York Knicks’ Julius Randle and the Portland Trail Blazers’ Robert Covington, respectively, in the first round, each big man got by the guards to advance to the final round.

In the finals, it came down to the final shot for both players. Sabonis was able to get his 3-pointer to fall before Vucevic’s to win the contest.

Because the events took place just a short time before the All-Star Game itself, participants wore their game jerseys.

Covington, the only non-All-Star in either of the first two events and the only HBCU graduate in the NBA, wore his Tennessee State jersey and announced prior to the contest that he was donating two $25,000 scholarships to students at his alma mater.