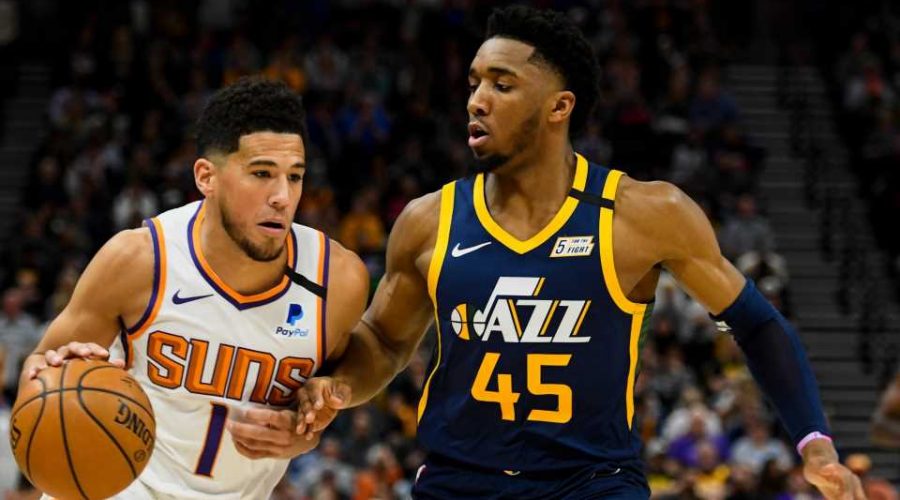 Who is the best shooting guard in the NBA?

The position is unique to evaluate with a handful of established stars, rising talents, skill specialists and rookies eager to make an immediate impact in the league.

A youth movement has already begun with players like Devin Booker and Donovan Mitchell stating their case to be the best at the position, but what about players like Bradley Beal, Zach LaVine and CJ McCollum who have seen sustained success for years now? Where does Kyrie Irving land after undergoing a position change with the Brooklyn Nets now that James Harden has taken over point guard duties? With Klay Thompson expected to make his return some time around Christmas, where does the three-time NBA champion rank?

Second-year players like Anthony Edwards and Tyrese Haliburton are looking to further cement their place in the league following a strong rookie year, but so are first-year future stars like Cade Cunningham and Jalen Green.

With that said, let’s try our hand at ranking every starting shooting guard in the NBA.

(Note: This list does not include players like reigning Sixth Man of the Year Jordan Clarkson or sharpshooter Buddy Hield because they come off of the bench for their respective teams. This list only ranks projected starting shooting guards in the NBA.)

Booker climbs to the top of this list following a breakout season that helped lead the Suns to their first NBA Finals appearance since 1993.

The 24-year-old averaged 25.6 points, 4.3 assists and 4.2 rebounds per game during the regular season to help Phoenix snap a 10-year postseason drought, then in his inaugural playoff run, he elevated his game to another level.

Booker went for 30-plus points four times against the defending champion Los Angeles Lakers, including a 47-point, 11-rebound masterpiece to close out the series and hand LeBron James the first opening-round exit of his entire career. Booker didn’t slow down from there, averaging 25.3 points per game to sweep the Denver Nuggets and advance to the Conference Finals.

The 24-year-old (he turns 25 on Oct. 30) had the best game of his young career in his Conference Finals debut, going for a 40-point triple-double to lead the Suns to victory without floor general Chris Paul. When Phoenix eventually advanced to the NBA Finals, Booker stated his case for Finals MVP after scoring 40-plus points in Games 4 and 5, but coming up short of the title crushed those hopes.

In Year 7, the young star guard will face loftier expectations than ever before, but if his season is anything like that playoff run, he’ll only shine brighter as the stakes get higher.

Irving, at a new position and all, comes in at No. 2 on these rankings.

According to Basketball-Reference, Irving still played 97% of his minutes at point guard last season, but half of his games played were without Harden available. Despite being seen as a point guard throughout the entirety of his career, Irving is expected to make the switch to a primary shooting guard with Harden taking over floor general duties in Brooklyn. Positional labels are wonky at-best and its fair to debate who is actually the point guard in Brooklyn.

Regardless, the first year of this experience was beneficial for Irving, who averaged 26.9 points on elite 50-40-90 shooting splits over his 54 games played. There is a chance Irving will only be available for 41 games this season due to New York’s COVID-19 vaccine mandate, but you can assume he’ll still be among the best players at his position when he is on the floor.

There’s a case to be made that Mitchell could have been in MVP conversations last year, and yet, the 25-year-old didn’t even crack an All-NBA Team.

It was another career-year for the Jazz superstar, who averaged 26.4 points, 5.2 assists, 4.4 rebounds and 1.0 steals per game while leading Utah to the best overall record in the NBA. He converted 3.4 3s at 38.6 percent clip and also attempted 6.0 free throws per game, all of which are the best marks of his career.

Even after missing the final month of the regular season and series opener in the postseason (certainly a factor in that All-NBA snub), Mitchell was a monster upon his return in the playoffs. He scored 30-plus points in seven of his 10 playoff games, averaging 32.3 points while shooting a blistering 43.5 percent from 3 during the Jazz’s run to Western Conference Semifinals.

Coming up shy of the Conference Finals will leave Mitchell hungry for more this upcoming season.

Beal is one of the most prolific scorers in the NBA, coming up just shy of his first-career scoring title again last season.

In 2019-20, Beal averaged 30.5 points per game, finishing with the second-highest scoring average in the league, trailing only Harden (34.3). It looked like he had the 2020-21 scoring title all locked up until Stephen Curry went full Human Torch over the last two months of the season to finish with an average of 32.0 points per game, just edging out Beal’s 31.3.

Doing so on a Washington team without many other weapons makes what Beal is doing all that much more commendable.

LaVine continues to improve each and every season and in 2020-21, he was finally rewarded for it by earning the first All-Star bid of his career.

Averaging career-highs of 27.4 points, 5.0 rebounds and 4.9 assists per game on career-best shooting splits of .507/.419/.849, LaVine put an end to all notions of him being a one-dimensional player and inefficient scorer.

The 26-year-old proved himself as a secondary playmaker in addition to his high-level scoring ability and if all goes to plan, we’ll finally see that translate to wins in 2021-22. This offseason, the Bulls have surrounded LaVine with the most talent he’s ever played with in adding Lonzo Ball and DeMar DeRozan to the trade deadline acquisition of Nikola Vucevic. With more weapons for opposing defenses to worry about, LaVine should be in line for a monster season and potentially, the first playoff berth of his career.

McCollum was well on his way to his first-career All-Star bid last season before a foot injury derailed his blazing start just 13 games in.

In the 12 games prior to the injury that sidelined McCollum for two full months, he averaged 27.6 points, 5.3 assists, 4.3 rebounds and 1.4 steals per game. The 30-year-old bounced back strong upon his return, finishing with season-long averages of 23.1 points, 4.7 assists and 3.9 rebounds per game, playing Robin to Damian Lillard’s Batman in another playoff berth for his Trail Blazers.

McCollum is one of the league’s sharpest midrange marksmen and has a deadly floater to bury the soft spots of opposing defenses. With Portland’s title aspirations facing more pressure by the year, it will be interesting to see what he has in store entering a fresh start with a clean bill of health this season.

Thompson was by far the toughest to place on this list, because when fully healthy, he would come in much higher than seventh. But after missing the past two full seasons recovering from an ACL injury and an Achilles injury, respectively, what version of the 31-year-old will we see?

In 2018-19, the last season we saw Thompson, he averaged 21.5 points, 3.8 rebounds, 2.4 assists and 1.1 steals per game while shooting 40.2 percent from 3. He earned his fifth-consecutive All-Star bid, was named Second Team All-Defense and helped lead the Warriors to their fifth NBA Finals in as many seasons. He was still a 3-point marksman and lockdown defender, and Golden State will hope he makes a full return to a similar player.

Thompson is expected to make his debut some time around Christmas, meaning he’ll likely miss half of the season.

Rozier has been an awesome success story over the past few seasons, going from a reserve guard to a solidified starter in the NBA.

Eyebrows were raised when the Hornets gave Rozier a $57 million deal over three years in the summer of 2019. He responded by doubling his scoring average (18.0 PPG) from the previous season (9.0 PPG) while shooting at the most efficient clip of his career.

Last season, he upped that scoring average again, shot even more efficiently and also became one of the best clutch scorers in the league. Rozier averaged 20.4 points, 4.4 rebounds and 4.2 assists per game while shooting a career-best 45.0 percent from the field.

In the clutch, only Karl-Anthony Towns, Zion Williamson, James Harden and Damian Lillard scored more points while shooting better than Rozier’s 50.0 field goal percentage mark when it mattered most.

Charlotte doubled down on their bet with Rozier, offering the 27-year-old a four-year, $97 million extension this offseason. He is undeniably one of the 10 best shooting guards in the NBA.

Smart’s averages don’t do justice to what he brings to the court. As one of the best all-around defenders in the NBA, Smart plays with heart and intensity that is immeasurable beyond numbers. And even with that being said, the Celtics’ captain posted career-highs with 13.1 points and 5.7 assists per game last season, coming into his own as a playmaker.

Smart missed out on an All-Defensive Team selection in 2020-21 for the first time in three years, likely due to only 48 games played because of injuries or coronavirus health and safety protocols. It’s safe to assume that if the scrappy guard participates in more games in 2021-22, he’ll make his return to one of the two All-Defensive Teams.

He lands on this list as the No. 9 ranked shooting guard, but don’t be surprised if new head coach Ime Udoka deploys Smart as the starting point guard to begin the season.

Edwards’ first season may have come up just short of Rookie of the Year honors, but the former No. 1 overall pick is destined for greatness.

The 20-year-old took things up a notch once he got settled into the NBA, taking over as the Timberwolves’ full-time starting shooting guard 18 games into the season. He continued to slowly progress as the year went on, displaying his limitless potential down the home stretch of the season.

After the All-Star break, Edwards averaged 23.8 points, 5.3 rebounds, 3.4 assists and 1.4 steals per game while shooting a much-improved 45.4 percent from the field and 34.9 percent from 3. He delivered the indisputable Dunk of the Year and also began to step up as “the guy” for his team late in games.

For now, he comes in at 10th on this list, but expect to see Edwards continue to climb his way up the ranks every year.