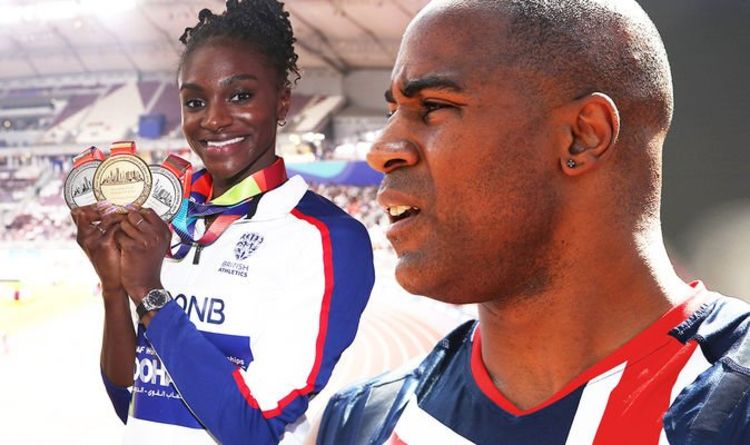 Olympic gold medallist Mark Lewis-Francis has told Express Sport what he hopes to see from Team GB on the track in this summer’s Tokyo Olympics. British athletes have been flying out to Tokyo over the past week now in preparation for the start of the Olympics.

All those involved have had to wait an extra year for this summer’s Olympics to take place after they were postponed for 12 months due to the coronavirus pandemic.

The Covid-19 situation is still rife in Japan though with the country declaring a state of emergency, meaning no fans will be in stadiums throughout the Olympics.

Training preparations for all athletes have been disrupted in a year like no other and face tough restrictions while in Tokyo for the Games.

But with just a few days until the Olympics officially get underway, attention is now turning to those who will be in action and the medal hopefuls for Team GB.

Lewis-Francis admits that he’d struggle to cope with competing in front of empty stadiums having won his 4x100m relay gold at a packed arena in Athens 2004.

The track & field events don’t start until July 30th, where Team GB have a host of athletes hoping to make a name for themselves.

And Lewis-Francis will have his eyes on a number of British stars hoping to create history.

“I think she’s going to go out there and represent her country really well.

“The 4x100m men and women, I think they’re going to do amazing and then we’ve got a couple of young athletes out there.

“Laura Muir in the 1500m is going to do amazing. It’s a young team and amazing team.

“I think the coaches have got everything under their belt in what they need to be and what they want.”

In the men’s 100m, reigning world champion Christian Coleman won’t be in action after being given a two-year ban for whereabouts failures.

And that could give GB’s representatives a chance to steal the show with Lewis-Francis confident in their abilities.

“I think they will both make the finals if they put their best foot forward.

“I’ve got 100 per cent belief in them and I believe they can achieve it if they stay focused and keep their mind focused.

“They’ve both capable of running under 10 seconds, so lets sit back and enjoy it and see what they can deliver.”

Mark was speaking from Summerfield Park in Birmingham where he was helping Birmingham 2022 Commonwealth Games launch the West Midlands regional ticket ballot. To mark the launch of the ballot, Birmingham 2022 revamped the basketball court at Summerfield Park. The court has been designed by Team England basketball player Kofi Josephs and local graffiti artist Zuke, who painted a bespoke, colourful mural onto the court. The revamped space aims to inspire participation in the sport and is part of a wider to plan to ensure the Games leaves a lasting legacy in Birmingham and the West Midlands.

West Midlands residents can apply for the regional ticket ballot at birmingham2022.com/tickets.