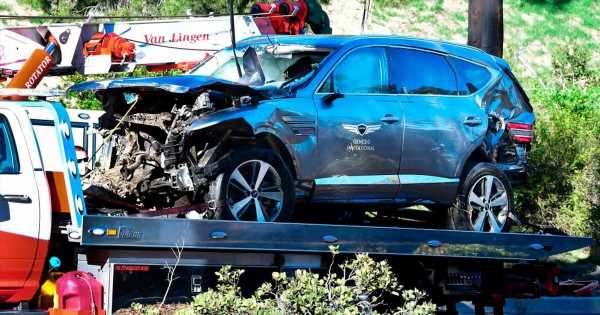 Tiger Woods’ crash in February was due to excessive speed, a LA County Sheriff has revealed.

Woods needed surgery after suffering a fractured leg and shattered ankle in a car crash earlier this year.

Images showed his car flipped on the side with Woods found unconscious at the Los Angeles scene, with his face and chin covered in blood.

And Los Angeles County Sheriff Alex Villanueva has revealed that Woods was travelling at an excessive speed ahead of the crash.

Villanueva said the car Woods was driving was traveling between 84 to 87mph in a 45mph zone when it initially crashed into a raised median, then 75mph when it struck a tree.

It was said that the speed was “unsafe for the road conditions” and Woods did not brake in the run-up to the collision.

Villanueva added Woods will not receive a citation over the crash, with the sheriff’s department previously saying that drugs and alcohol were not factors in the crash.

Woods will miss the Masters this week due to his injury having won the Green Jacket for the fifth time in 2019.Rory McIlroy will compete at Augusta having visited Woods at his Florida home recently.

“When you hear of these things and you look at the car and you see the crash, you think he’s going to be in a hospital bed for six months. But he was actually doing better than that.

“A few of us that live down in south Florida went to see him. I’m sure he appreciates that. Everyone would love to see him back out here again.

“I know he’d love to be here and I’m sure he’s going to put everything he has into trying to be ready to play here next year.”

READ MORE: Emmanuel Petit had iconic cameo on The Bill because 'he thought it would be like Friends'

April 7, 2021 NBA Comments Off on Tiger Woods was driving up to 87mph in 45mph zone before crash, police confirm
NFL News