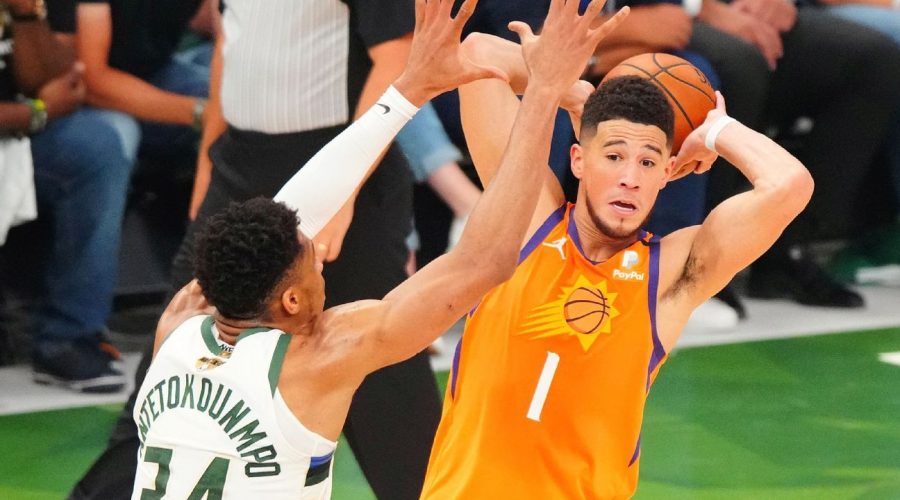 The Milwaukee Bucks know what it takes to come back from a 2-0 deficit, having already done so in the second round against the Brooklyn Nets. Now, after falling behind 2-0 in the NBA Finals, the Bucks return to Phoenix with the series level at two games apiece. Can the Phoenix Suns regain the momentum at home or is the “Bucks in 6” rallying cry destined to become reality? Our experts debate the big NBA Finals questions heading into Saturday’s Game 5 (9 p.m. ET on ABC and the ESPN app).

MORE: Why the Bucks have stolen all the momentum in the NBA Finals

1. Chris Paul’s turnovers: Nothing, something or everything?

Andrew Lopez: It’s something, and that something is Jrue Holiday. The work Holiday is doing on the defensive end is starting to pay off, and we saw Paul do something he rarely does: turn the ball over in clutch minutes. Paul had two turnovers in clutch time — defined by the NBA as a game with a score within five points in the final five minutes — in Game 4. He had just 8 turnovers in 152 minutes of clutch time all season prior to that.

Zach Lowe: Something, and close to everything. The Bucks are winning just about every numbers battle, including and especially the possession battle. They are walloping Phoenix on the offensive glass, forcing more turnovers, getting to the line more and generating better shots (by a lot). Unless the Suns reverse one or two of those trends, I don’t think the one big mathematical edge they hold — home-court advantage — will be enough.

Paul’s uncharacteristic turnovers are a big part of that possession edge. They also ignite Milwaukee’s lethal transition game. Phoenix has contained the Bucks in the half court, but transition is another story.

Tim MacMahon: Something. Just ask Paul, who pinpointed his turnovers as the Suns’ biggest problem in Game 4. Paul averaged only 1.6 turnovers in his first 15 games of the playoffs, and he has committed a total of 15 in the past three games. Some of them can be attributed to uncharacteristic sloppiness, but the relentless pressure from All-Defensive selection Holiday has been a major factor.

Jorge Sedano: It’s definitely something. Paul’s 15 turnovers over the past three games are the most he has had in a three-game stretch in the playoffs since 2012. The main reason for this is Holiday’s defense. According to NBA Stats, Holiday has guarded Paul on 78 possessions and has forced seven turnovers. If the Suns are going to win, they need to do away with “The New Chris Paul” and bring back the old one.

Nick Friedell: Something. All we’ve heard all season long is how much of a stabilizer Paul is for the young Suns offense. It doesn’t matter how well Devin Booker plays if Paul continues turning over the ball like this. As one of the greatest point guards of the era, you have to figure he will right himself heading into Game 5.

2. Fact or fiction: Khris Middleton has become the Bucks’ most important player?

Lowe: Fiction. It’s close, but it’s still Giannis Antetokounmpo for his all-around play — as exemplified by the all-time block on Deandre Ayton to help the Bucks clinch Game 4. Middleton’s 40 points and outrageous crunch-time shotmaking in that game are fresh in our minds, but Antetokounmpo put up 83 points on 29-of-45 shooting combined in Games 2 and 3.

MacMahon: Fiction. And foolishness. Antetokounmpo is a two-time MVP who is playing the best basketball of his career. Middleton is his high-caliber sidekick, but it’s silly to even suggest that anyone is more important than the man who is averaging 32.3 points, 14.0 rebounds, 5.5 assists and dominating defensively during the Finals.

Sedano: Fact. In Game 4, Middleton outscored the Suns by himself 10-4 in the last 2:15 of game time. The reality is that the Bucks generally go as Middleton goes. This postseason, the Bucks are 2-5 in games Middleton scores 17 or fewer. In games he scores 18 or more, the Bucks are 12-2.

Friedell: Fiction. Middleton is awesome, but he can’t do everything Antetokounmpo does. Middleton remains an underappreciated star and has shown to be the closer for this team, but he doesn’t carry the same level of importance as the two-time MVP.

Lopez: Fact. Let me be clear, Antetokounmpo is the Bucks’ best player. That’s without question. The 32-14-5 line so far in the Finals tells us that. But as Middleton goes, so goes the Bucks’ record. The only losses the Bucks have had this season when he has scored 18 or more have come in Game 1 of the Finals (with Antetokounmpo just coming back from injury) and Game 5 of the semifinals against the Nets, when Brooklyn came from behind in the fourth quarter. If Middleton plays up to the level he’s capable of, it makes the Bucks very, very hard to beat.

3. Which non-star will play the biggest role in deciding Game 5?

MacMahon: Mikal Bridges. He was MIA offensively in Milwaukee, scoring only 11 points on eight shots in the Suns’ two losses. That came on the heels of his highest-scoring game of the playoffs, a 27-point performance in Game 2. Bridges’ value comes on defense, first and foremost, but Phoenix needs him to be a factor as a slasher and shooter to keep up with the Bucks.

Sedano: Bridges is the most important role player in this series. His defense is clearly important. However, in this series his offense is possibly more important. He scored 41 total points in Games 1 and 2 (including a huge 27-point performance in Game 2), but he scored only 11 points combined in Games 3 and 4. He needs guys to get him open looks. That’s possible if Paul can get going again and Booker can add facilitating to his scoring load.

Friedell: I’m going to go with Bobby Portis. He has the fire and talent to change the course of a game. If he can produce off the bench in a major way while the Bucks get strong performances from their core, there’s a solid chance they will have the opportunity to party in Milwaukee after Game 6.

Lopez: If the Bucks want to have success, Pat Connaughton has to continue to give the team a lift off the bench. A quick breakdown of Connaughton’s shooting numbers this series compared to the rest of the Bucks’ bench:

Lowe: Bridges, only because his level of involvement in the Suns’ offense — particularly the number of corner 3s he finds — seems like a bellwether for the team. Phoenix averaged almost 10 corner-3 attempts per game in the regular season. They have 28 through four games in this series, and 17 of those came in Game 2. Bridges was a non-factor in Game 4. He will also be a huge part of Phoenix’s effort to get a handle on Middleton on the other end. Honorable mention to Portis and Cameron Payne; the Suns desperately need someone to pressure the rim from the outside, and Payne might be their best candidate in spot minutes.

4. What will it take for someone to win on the road in this series?

Sedano: Historically, role players play better at home. If either team can get the outlier road performances out of their role players, then that will likely swing the series.

Friedell: An unbelievable performance from a star who carries his team across the finish line. Booker almost did it in Game 4. Antetokounmpo tried to make it happen in Game 2. Somebody is going to have to put his team on their back and deliver a career-defining performance on the road.

Lopez: For the Bucks, it’ll take Holiday and Middleton making shots. Holiday is shooting just 33.3% this series and is 6-for-22 from 3-point range. His defense has been stellar as always, but shots have to fall. In the regular season, Middleton shot 47.6% from the field and 41.4% from deep. In the two games in Phoenix, those dropped to 40.5% and 33.3%.

On the other side, Phoenix has to protect the basketball the way it did in the rest of the playoffs. The 17 turnovers the Suns had in Game 4 were tied for the most they’d had in any playoff game this season, and the 14 they had in Game 3 were tied for the second most. If they stay at 12 or below — as they did in the first two games — they have a great chance to steal a game in Milwaukee.

Lowe: Generally the same things it takes to win any game at this level: a couple more 3s than normal, the requisite poise to avoid turnovers and slow home-team runs and some luck.

MacMahon: Can all of a team’s stars show up for a road game? Antetokounmpo didn’t get much help during the first two games in Phoenix, when Middleton and Holiday combined to shoot 36.4% from the floor. Devin Booker had a dud in Game 3. Paul had his worst performance of these playoffs in Game 4.

5. Which team wins the series, and in how many games?

Friedell: I said Bucks in 6 prior to the series and I’ll stick with it. They’ve got the momentum and they can ride it into Phoenix on Saturday. If they can pull out a Game 5 win on Saturday, they’ll head into what would be one of the most electric atmospheres in NBA history for a potential closeout game in Game 6 in Milwaukee.

Lopez: It feels like whoever wins Game 5 takes the series … so I think I’ll go with the Deer District and Bucks in 6.

Lowe: I had Suns in 7 before the series — partly because of uncertainty about Antetokounmpo’s knee — and I don’t believe in changing predictions as the series unfolds. That has a solid chance to hit, but I feel less confident in it now.

MacMahon: I’ll stick with my pre-series prediction of Suns in 7, although I must admit that I don’t have a whole lot of confidence in it. I didn’t anticipate that Antetokounmpo would be so dominant while playing on a hyperextended knee that put his status in question entering the series. However, the Suns have home-court advantage, which clearly has mattered a lot in these Finals.

Sedano: My original pick was Suns in 7. I’m sticking to that. I think Chris Paul is the key. He is too good and too smart to not figure out his turnover issues. If he does that, I like Phoenix’s chances.