Stephen Curry and Alfonzo McKinnie connected on three-pointers in a 14-point Golden State Warriors run late in the third quarter that propelled the two-time defending champions to a 117-101 victory over the visiting Memphis Grizzlies on Monday night.

Klay Thompson scored a game-high 27 points for the Warriors, who won their eighth straight overall and sixth in a row at home despite losing Draymond Green in the second quarter to a foot injury.

Marc Gasol flirted with a triple-double for Memphis with eight points and game-highs in rebounds (10) and assists (nine).

Seeking to beat the Warriors in their first meeting of the season like they did last year, the Grizzlies led by as many as seven points in the first quarter and six in the second before finishing the half at 58-all.

Memphis was still within 76-71 after two Gasol free throws with 3:44 left in the third quarter before McKinnie triggered the game-breaking run with a jumper.

Curry then hit his three-pointer, Kevin Durant dropped in a pair of jumpers, Kevon Looney put in a lay-up and McKinnie bombed one in from three-point range, opening a 90-71 advantage in the final minute of the period.

The Warriors coasted home from there in improving their record to 10-1. 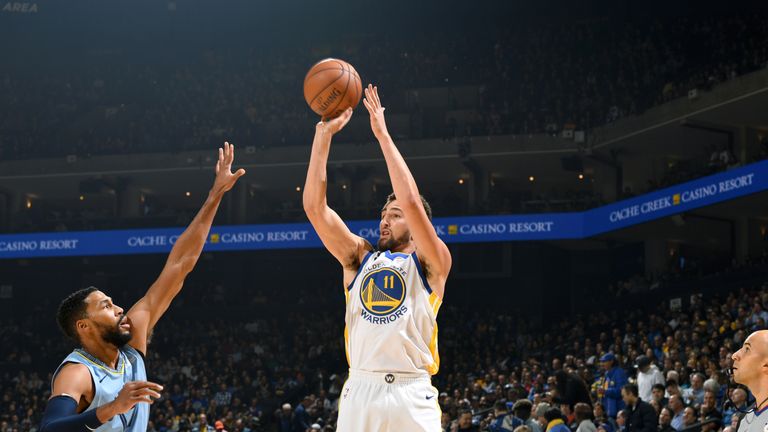 Durant backed Thompson with 22 points and Curry finished with 19 to go with a team-high seven assists for the Warriors in a battle between the NBA’s top scoring offense against its second-leading defense.

McKinnie totalled 14 points and Quinn Cook 13 for Golden State, which had averaged 130.1 points in the first seven games of their winning streak.

Dillon Brooks had a team-high 18 points, while Jaren Jackson Jr and Shelvin Mack scored 15 apiece for the Grizzlies, who completed their three-game western swing with one win and two defeats.

Garrett Temple added 13 points on a night Mike Conley was held to nine.