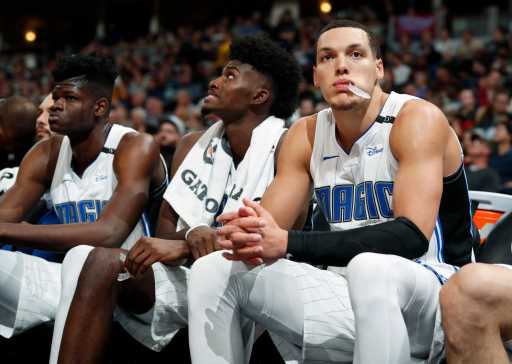 Kiz: The NBA trade deadline looms on Thursday. After a sluggish start to the season, the Nuggets are on a roll. Is this team one piece away from serious championship contention? Front-office honcho Tim Connelly insists he’s always open to making a big trade. But is the time now? If not now, when? Should the Nuggets jump in the hunt for Orlando forward Aaron Gordon?

Singer: The Nuggets ARE in the hunt for Gordon, however they’re far from the only ones. To get the bouncy two-way wing, they’ll have to offer something more tantatilizing than Portland, Minnesota and Houston can offer, according to league sources. Only Connelly truly knows how many young assets he’d be willing to part with, including potentially a future first-round pick and another young player, but the Nuggets need to ask themselves how much Gordon improves their chances of getting out of the West. If he believes that number is significant, it’s worth the risk.

Kiz: It seems as if Gordon has been playing in this league for a decade. How could he possibly be only 25 years old?  He has the bounce and defensive versatility that would appeal to the way coach Michael Malone likes to play basketball. And when did he acquire a magic touch on the 3-ball? His 40 percent accuracy this season from beyond the arc is by far the best of his career. OK, I’m sold. Let’s make a deal. Get r done. Easy-peasy. No?

Singer: Well, it all depends what Orlando could stomach. Gordon has formally requested a trade, according to The Athletic and confirmed by The Post, meaning the Magic’s leverage is dropping by the minute now that that news is public. If the Magic would take a package of Gary Harris, Bol Bol and a future first-round pick, the Nuggets would have to strongly consider that as an option. Perhaps they’d have interest in defensive stalwart PJ Dozier, whose minutes would be impacted by a potential Gordon addition, too.

Kiz: I like to call it fantasy basketball. It’s a tempting game for media and fans alike to play. We dream of our local NBA team upgrading the roster with a big-name player. Fun stuff to think about. But why is it so often nothing more than a flight of fancy? Because the deals we imagine are often pure fantasy, born of a lopsided trade offer that favors our local team. We put Gary Harris in the trade, even if his current value around the league is less than zero. So let’s get serious: Do the Nuggets have the trade capital to get Orlando’s attention?

Singer: They do, with a caveat. The Nuggets can only trade their 2021 first-round pick and their 2027 first-round pick right now because of various protections. So they could go all-in for Gordon, but that likely means taking yourself out of the running if Bradley Beal ever becomes available. Good luck getting Washington’s attention without as many assets as possible. I’ll begrudgingly concede you’re right. Deals rarely get done that we, the media, conceive of, and that’s because we place a different value than those negotiating said deals. If the Nuggets want a path to improvement, it’s sitting right there for the taking.

March 22, 2021 NBA Comments Off on Should Nuggets trade for Aaron Gordon?
NFL News