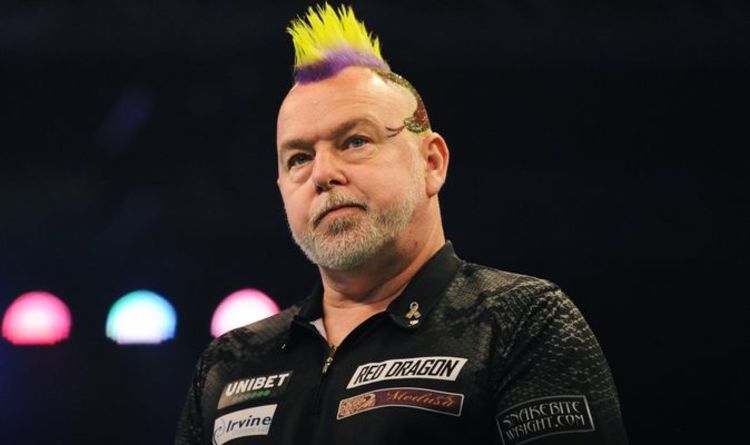 Former world champion Peter Wright has called for the PDC to alter their ruling to allow the game’s top female players to earn a tour card, ahead of his Grand Slam of Darts clash with Fallon Sherrock.

Wright will take on Sherrock in the quarter-final of the tournament this evening after booking a last-eight place thanks to a nail-biting 10-9 victory over Jose De Sousa on Thursday.

Sherrock continued her impressive run in the event as she defeated Mensur Suljovic 10-5 in the round of 16, after she became the first woman to advance out of the group stage after dramatically defeating Gabriel Clements 5-3 with a 170 checkout.

Ahead of his clash with the Queen of the Palace, Snakebite discussed the current status of the ever-growing women’s game and revealed that he believes the victor of the Women’s Series should be rewarded with a tour card.

When asked if winning the Women’s Series should merit a tour card prize he responded: “It should be but it is not up to me.”

JUST IN: Fallon Sherrock speaks out with Peter Wright slammed as ‘worst version’ of himself

Wright went on to add that not being rewarded to compete at a higher standard of darts would be ‘disappointing’ for the sport’s starring female players – including Sherrock – as it blocks them raising their game even further.

“It is disappointing for the top two women not to [earn a card] because they’ll want to raise their game to higher levels,” Added the 51-year-old.

“Obviously they are going to be playing higher levels every single game. They know they have got to [throw] 90 odd, 95 plus and tons all the time.”

Sherrock and Lisa Ashton have proved to be the two starring players to break into the men’s game from the Women’s Series, and Wright believes they have more than proved they can compete at the highest level.

He continued: “No disrespect to all the other ladies that are coming through and trying, and stuff like that but Lisa and Fallon are the ones who are doing 100 averages, 90 averages all the time.

“That [earning a tour card] will only improve their darts, so hopefully the rules change and they can get a tour card.”

Wright and Sherrock will face off for the second time at the Grand Slam of Darts, after the Snakebite defeated the 27-year-old 5-1 in the group stage last Saturday.

Despite this, the Queen of the Palace comes into their quarter-final clash in hot form, and seems full of confidence as she takes on a former world champion.

Ahead of tonight’s game Sherrock said: “I’m going into that game thinking if I can take a doubles out, get close to him, maybe it’ll be a different scenario.

“I’m just going to go in like I have been the last couple of games. You know what, I can play like everyone else and I’m going to give you a game.

“I’m not going to just let you run away with it. I go into each game confident I’m going to win.”