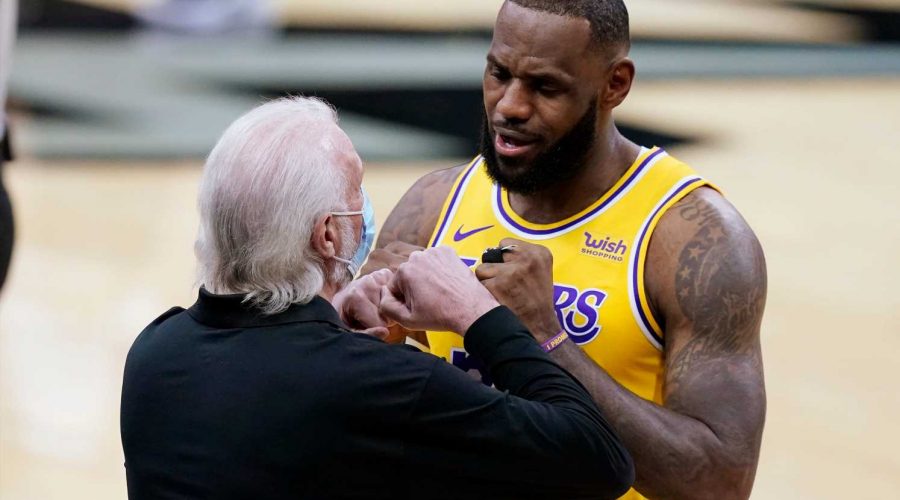 The high profile NBA star became further enraged with the persistent racism and divisiveness in the United States. So Los Angeles Lakers forward LeBron James spoke bluntly about Donald Trump’s role with his supporters rioting at the Capitol Wednesday.

“He loved those people hitting the Capitol because that’s what he cares about,” Popovich said of Trump. “He’s incapable of caring. In one way, it’s sad because he’s a deranged and really flawed individual. But he’s also dangerous. That’s why I don’t think it’s so far-fetched for people to start talking about the 25th Amendment.”

LEBRON WEIGHS IN: 'What would’ve been the outcome' if rioters were black?

In recent years, James and Popovich have become the NBA’s most outspoken for critiquing Trump’s racially divisive rhetoric and advocating for social justice causes. Other NBA stars and coaches have done the same. But what James and Popovich say and do resonate the most.

James, a Black man who grew up in a single-family household in Akron, Ohio, has shared his experiences dealing with racism and poverty. About 2½ years ago, James partnered with his foundation and the Akron Public Schools to launch “I Promise School," which helps at-risk youth with education and financial resources. This past year, James founded “More Than A Vote,” an organization that has improved voter turnout in the Black community.

Popovich, a graduate of Air Force Academy with a degree in Soviet studies, has prioritized having a broad worldview. During his 24 seasons as the Spurs’ head coach, he has overseen a roster filled with American and international players. Before the pandemic limited each team’s itineraries, Popovich organized team-bonding activities that entailed field trips to cultural sites and team dinners so players could learn about each other’s backgrounds. Popovich also has often talked to his players about current events and race-related issues.

“As a white person of privilege, I learn more from my Black players on how they handle things,” Popovich said. “They’re the ones that have actually saved our country and helped to make it a country with the promises that were made long ago.”

For the past seven years, James led the NBA with speaking out on systemic racism and police brutality. During the 2012-13 season, James and his Miami Heat teammates wore hoodies to protest 17-year-old Trayvon Martin being shot by George Zimmerman, an unarmed Black man who wore a hoodie in his Florida neighborhood.

Afterwards, the NBA players union received more league-commitments toward social justice causes. Both the NBA and NBPA established a social justice coalition, which includes players, coaches and owners advocating for police and criminal justice reform. The majority of NBA teams used their venues as voting sites. “More Than a Vote” partnered with the NAACP Legal Defense Fund to recruit 40,000 poll workers

“He’s going to be an iconic figure. Nobody can be what Muhammad Ali was as far as sport is concerned. But in that same genre, I am so proud of this guy,” Popovich said of James. “He doesn’t do it with hate. He just tells the truth. He lays it out there. It enables everybody else to feel good about understanding that they do have a First Amendment right and that they can do these things. It’s one of the greatest things about our country. So he’s a very special person in that regard.

"He enables in the way that you would hope a president of your country would enable. But, as we know, that’s an impossibility.”

“When Coach Pop speaks, he’s very articulate and to the point,” James said. “Very educated and very smart man. He comes from a sense of being a human being, and knowing what’s going on in our country and knowing the difference between right and wrong and the things and the challenges that we have to go through. I love Coach Pop not only as a coach, but more as a man.”

Other NBA coaches have also been instrumental with social justice causes. Philadelphia 76ers coach Doc Rivers has shared his experiences and consulted with the players in the bubble when they considered canceling the season. Atlanta Hawks coach Lloyd Pierce, who is also Black, became involved with the Hawks’ voting efforts and helped form the “Coaches for Racial Justice.” Warriors coach Steve Kerr has criticized Trump’s rhetoric and has advocated for stricter gun laws.

Yet, Popovich’s involvement has made more impact for numerous reasons.

He has helped several charities, including the San Antonio Food Bank, Roy Maas’ Youth Alternatives, Boys and Girls Club and The Miracle League. Since he is the NBA’s longest tenured and actively most accomplished coach, Popovich’s words carry significant weight.

Though Popovich does not have the same life experiences as the predominately Black players he coaches, his willingness to speak out on social justice issues have made other coaches and players feel more comfortable to do the same.

“We’ve made this a priority in our relationships with our teams for the last couple of decades,” Popovich said. “In that sense, it’s nothing new. We’ve talked about living in a racist country for a long time and about how to be aware and how to handle it.”

James has handled that well with conviction and grace. Even after Fox News’ Laura Ingraham said two years ago that James should “shut up and dribble,” the Lakers’ star has refused to stay quiet.

Therefore, it hardly seemed surprising that James devoted his post-game press conference on Thursday devoted entirely toward the riots at the Capitol.