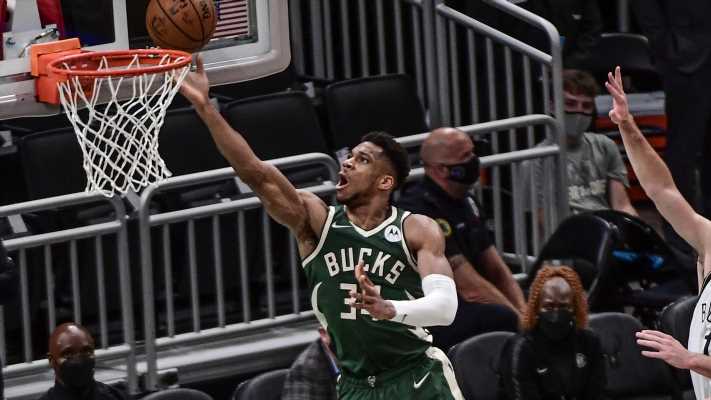 The Milwaukee Bucks were good enough to win Game 3.

They need to be much better to win Game 4.

Milwaukee salvaged its season with an 86-83 victory over the Brooklyn Nets on Thursday and avoided a 3-0 deficit. Last-minute baskets by Khris Middleton and Jrue Holiday, and free throws by Middletown helped Milwaukee overcome a late 83-80 deficit.

"It doesn’t matter how you do it this time of year," Bucks coach Mike Budenholzer said. "You’ve just got to find a way to get it done."

The Bucks took a step in the right direction in their effort to turn this into a competitive Eastern Conference semifinal series.

▪️ KD & Khris trade clutch buckets
▪️ Jrue spins in for the go-ahead ✌️
▪️ Milwaukee 🔒 late to seal the [email protected] vs. @BrooklynNets was INTENSE down the stretch! #ThatsGame

Antetokounmpo had 33 points and 14 rebounds, and Middleton finished with game-highs of 35 points and 15 rebounds. Every bit of their production was needed, including their 68 of the Bucks’ 86 points.

Budenholzer said after Game 2 that Antetokounmpo needed to be more aggressive. He was, launching 31 shots in Game 3 after taking 15 in Game 2.

"I didn’t start the game thinking I’ve got to be aggressive, I’ve got to shoot 30 shots," Antetokounmpo said. "I was just trying to be in the moment, and I knew my instincts were going to take over."

His shot selection wasn’t always great though. He was just 1-for-8 on 3-pointers, and his foul shooting remains a problem. Antetokounmpo, who says he spends considerable time working on free throws, made just 4-of-9 from the line and had a 10-second free throw violation called against him.

Hear from @Giannis_An34 after the @Bucks defeated the Nets in Game 3.#NBAPlayoffs | #FearTheDeerpic.twitter.com/JgjNkwA4wN

"Those are the type of shots they want me to take, and I’m confident," Middleton said. "I’m good enough. I’ve worked on those shots a lot to knock them down, and they went down for me tonight."

But that two-man game isn’t sustainable. Just four other Bucks players scored, and Holiday and Bobby Portis were the only other Bucks to make more than one shot.

The offense still needs to improve with more balance and better ball and player movement. The Bucks ran set plays at times, but they relied on pick-and-rolls and one-on-one.

But it’s also clear that Brooklyn’s defense — with its switching and packing the paint — is making it difficult for Milwaukee to run too much creative offense.

On Thursday, the Bucks, who blew a 21-point first quarter lead, had just enough offense, and they made up for some of the uglier aspects (neither team shot better than 38% from the field) with defense. Milwaukee is content with mucking it up and turning the game into a low-scoring slugfest. That might be its best way back into the series.

Giannis Antetokounmpo and the Bucks can even the series in Game 4 on Sunday. (Photo: Benny Sieu, USA TODAY Sports)

The Bucks still need to improve offensively. Kevin Durant and Kyrie Irving shot a combined 20-for-50 from the field and 5-for-16 on 3s. As good as Milwaukee is defensively, that will be difficult to replicate.

"Part of it is playing desperate, knowing the situation, knowing what this game means to us, what it means to be home," Holiday said. "The other part is the performance we had the first two games and showing that’s not the type of defense we play. That was really out of character. Being able to really be aggressive, make it tough on Kyrie and KD and go from there."

The Bucks did what was needed to win Game 3. That won’t be enough in Game 4.

"We can play better. We can play faster," Antetokounmpo said. "We can play more together. We can move the ball better so we can back to scoring 110, 120 points like we usually do. But at the end of the day if we can win a game scoring 86, I’m taking it."

June 11, 2021 NBA Comments Off on Opinion: Bucks do enough to win Game 3 vs. Nets, but will still need much more in Game 4
NFL News