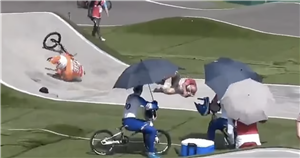 Olympics BMX racer Niek Kimmann is a doubt for the quarter-final heats after injuring his knee in practice following a crash into an official.

Kiemmann was getting to know the circuit ahead of Thursday's quarter-finals when the bizarre incident occurred.

The Dutch star was going at some speed when he collided with a marshall crossing the track.

The Olympics official seemed unaware that the 25-year-old was hurtling towards him with Kimmann unable to avoid the crash.

And the Netherlands BMX ace, who is a former world champion, admitted he may now be out of the event due to an injured knee.

Alongside of a video of the crash, he wrote on social media: "So this is what happened today.

"Hit an official that wanted to cross the 2nd straight. Hope the official is O.K.

"My knee is sore, but will do my best to be ready for Thursday! Thanks everyone for the messages, appreciate it!"

Who will end the Olympics at the top of the medal table? Let us know your thoughts in the comments section below

Kiemann's crash came on the same day compatriot Mathieu van der Poel's chances of gold in the men's mountain biking were ended by a horror crash.

The pre-race favourite was left fuming the removal of a ramp that had been in place when he trained.

He tweeted: "I didn’t know. The ramp was there during the recon. I only heard they removed it during the test event."

July 27, 2021 NBA Comments Off on Olympics BMX racer in agony after crashing into official in practice
NFL News