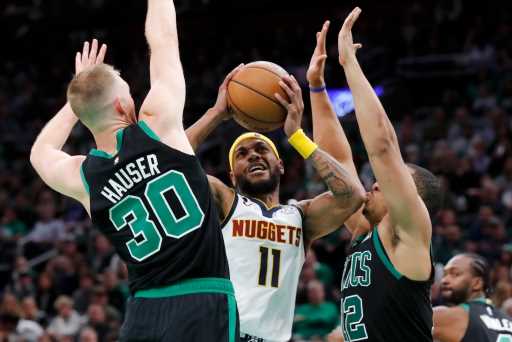 Before he landed comfortably in Denver, Bruce Brown was a point guard in Detroit and then a roving forward in Brooklyn.

Across those four seasons, Nuggets coach Michael Malone said he took note of Brown’s toughness and intangibles. Even from afar, he deemed him a winner.

The Nuggets didn’t have Jamal Murray (reconditioning), Michael Porter Jr. (heel contusion), Jeff Green (knee contusion) or Bones Hyland (non-COVID illness), and yet what they had was enough. There were superlative, career-high performances up and down the roster. Nikola Jokic flirted with another triple-double, dousing the Thunder with 39 points. Aaron Gordon dumped in 31. Perhaps the most surprising showing came from Vlatko Cancar, whose career-high 20 points — in addition to exemplary clutch defense — helped stabilize an inconsistent bench unit.

Amid the resilient, gutsy win, Brown compiled a jarring line: 17 points, 13 rebounds, 10 assists and four steals in 45 minutes of work. It was his first career triple-double, the type of accolade not seen from any non-Serbian Nugget for years.

What he did against the Thunder isn’t totally out of the norm for Brown.

Throughout his career, Brown’s had two games with 14 rebounds, and another with 11 assists. Furthermore, he’s had double-digit rebounds in three of Denver’s last seven games.

Without any other point guards available on the roster (Ish Smith was out with a calf strain, too), Brown conducted the offense and attacked downhill like a running back hitting a seam. He spaced the floor like a seasoned Jokic veteran, timing his cuts to maximize impact on the unsuspecting Thunder. Defensively, he swarmed like he always does and cleaned the glass, doing the job Porter and Green couldn’t do while watching from the bench. If anything Brown does is elite, it’s his versatility.

“Some guys are in the foxhole with you, some guys, like they’ve got one foot in, one foot out,” Malone said after the game. “Bruce is, he’s all the way in.”

When general manager Calvin Booth made the decision to sign Brown on a two-year, $13.2 million contract with a player option for the second year, he couldn’t have known it would be this smooth. Brown’s been a seamless fit with former teammates Green and DeAndre Jordan, an invaluable resource as Denver’s point guard depth continues to take a beating. He quickly earned Malone’s trust. Brown leads the Nuggets in fourth-quarter minutes at 128. Jokic is second, at 107.

As the Nuggets were mounting their 15-point comeback Wednesday night, Jokic was on the bench talking through strategies with Brown. There seems to be implicit respect between the two. In Brown’s direction, it’s the command with which Jokic dictates the game. And from Jokic’s perspective, it’s the energy and effort that’s never in doubt from his teammate.

Through the first quarter of the season, Brown’s enjoying career-highs in minutes (28.8), points (11.1) and assists (4.8). By season’s end, the rebounding could be there, too.

To say he’s been a find would be selling his impact short. He’s been a steal in every regard.

November 25, 2022 NBA Comments Off on Nuggets’ Bruce Brown firmly in “foxhole” with Michael Malone: “He’s all the way in.”
NFL News