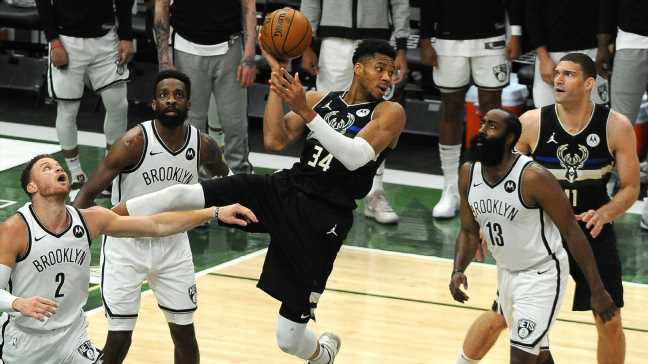 NBA fans were anticipating a Brooklyn Nets-Milwaukee Bucks matchup to turn into a classic series. What’s happened is it’s turned into a classic 2021 series.

This messy, flowless, injury-riddled, unpredictable and dramatic season has its mascot: a seven-game saga after the Bucks struck back to take Game 6 from the Nets, 104-89 on Thursday night.

This has very much been a quantity-over-quality season: Do what must be done to get it in and hope for the best. That’s how this series has played out, game plans getting jumbled or flat-out tossed in what feels like a mixture of battling demons and a war of attrition.

Brooklyn’s rotation has changed every game. Milwaukee’s fidelity to its game plan has too.

“This series is a little bit unique,” Bucks coach Mike Budenholzer said. “For them, it’s been a revolving team from night to night. We have to be ready for whoever plays in Game 7. It could be a different game.”

Khris Middleton and Giannis Antetokounmpo played like they were in an elimination game for Milwaukee, showing an edge and focus you’d prefer to see every time they take the floor in a playoff game. They combined for 68 points, 27 rebounds and eight assists. Middleton had five steals and two four-point plays. Antetokounmpo finally stopped taking the bait on shooting jumpers, as he attacked the rim with 11 of his 12 made field goals coming from inside the paint.

Durant and James Harden, meanwhile, played like two guys who were not as desperate and were tired from their emotional Game 5 win. They scored some points, Durant 32 and Harden 16, but their combined 11 turnovers spoke more to their team’s performance. The Nets were outscored by 25 points when Durant was on the floor.

You’d like to suggest the Nets were saving energy for Game 7, but considering both Harden and Durant played 40 minutes each, that’s not really true. They’re just trying to do the best they can.

“Our guys were a little fatigued, we didn’t have our best stuff,” Nets coach Steve Nash said. “We were just facing a few too many things that were going against us, in the big picture.”

Is that what you want to hear about a closeout game in what some believed, at least two weeks ago, was the de facto Finals this year? No. But it is candid. This is your 2020-21 NBA season!

LeBron James made waves this week when he chided the NBA for jamming this season in and lamented he wasn’t listened to when he warned it would lead to injuries. The league office felt threatened enough to issue a counter-narrative, claiming injury rates were the same as previous years.

This misses the point. Starting this season at Christmas and cramming in 72 games, an All-Star Weekend, a play-in tournament plus a regular-length postseason was never a debate about health. No one really didn’t believe James was right about the risks.

It was always about making the best of a bad situation, financially and competitively.

True to form, that is what the Bucks and Nets will do. They will report for Game 7 and they will play for the right to participate in the Eastern Conference finals. What you see is what you’ll get. But they’ll give what they have.

“It’s the playoffs, man,” Bucks forward P.J. Tucker said. “We dream about this our whole lives. I’m not backing down from nothing, I’m fighting for every inch. We compete and we fight and we’re going to fight again in Game 7.”