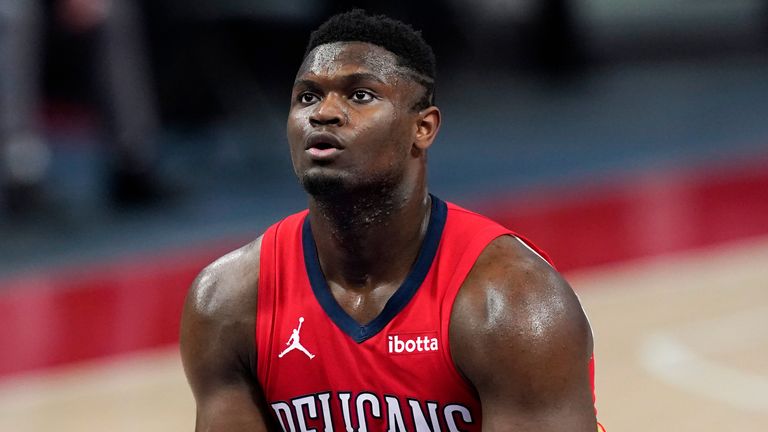 The NBA All-Star Game will continue its history as an exhibition of the league’s rising stars this year after four first-timers were added as reserves at the 2021 showpiece event.

Zion Williamson of the New Orleans Pelicans was named alongside LeBron James in the West, while the Chicago Bulls’ Zach LaVine, Boston Celtics’ Jaylen Brown and New York Knicks’ Julius Randle were given the nod in the Kevin Durant-led East.

Luka Doncic and Donovan Mitchell were among the debutants as 10 players appeared in the game for the first time last season, marking the most since 2002.

Oscar Robertson’s first All-Star game as a rookie in 1961 saw him finish one rebound shy of a triple-double; the late great Kobe Byrant posted a team-high 18 points while becoming the youngest All-Star in history in 1998; in 2005 LeBron James and Dwyane Wade made their All-Star debuts years before becoming team-mates in Miami; Giannis Antetokounmpo marked his maiden All-Star appearance with a team-high 30 points in 2017.

The game has become a stage for the NBA’s best and brightest, and in many cases the league’s future.

The 2019 No 1 overall pick is the fourth-youngest All-Star in NBA history behind Bryant, James and Magic Johnson, as well as being just the 10th player to be named an All-Star by the age of 21.

Williamson is averaging 25.6 points, 7.2 rebounds and 3.4 assists in 33.1 minutes per game through 34 outings so far this season. He has posted at least 30 points in nine games, including season-best efforts of 36 points in defeats to the Portland Trail Blazers and Dallas Mavericks.

Expectations coming out of college of a generational mismatch have been justified, Williamson wasting no time in becoming the face of the Pelicans franchise and a new era under Stan Van Gundy. The 20-year-old has been ferocious as a finisher with bar-setting figures in the paint, while also making strides as a provider for his team-mates.

What’s more, the best is still yet to come as Williamson continues to address his value at the opposite end of the court, something sure to be aided by a head coach in Van Gundy whose defenses at previous jobs have often performed at a top-10 level.

Prior to his announcement Randle admitted becoming an All-Star would be a “milestone” achievement in what is his seventh season since entering the league with the Los Angeles Lakers in 2014.

“It was really special,” Randle said in reaction. “It was surreal in a sense. Everything you could dream of. It just seemed like it all came to fruition. It was amazing, honestly, and everything that I signed up for.”

The 26-year-old has been a staple of a surprise-package Knicks team this season, averaging 23.1 points, 10.9 rebounds and 5.5 assists across 36 games, and serving as a mentor to promising rookies Obi Toppin and Immanuel Quickley.

A career season has also arrived amid a contract year for Randle, who has underlined his desire to stay in New York when his current deal expires at the end of the campaign.

He is just the eighth Knicks All-Star this century and is set to become the first to take part in the game since Carmelo Anthony in 2017.

A no-brainer. Brown is currently averaging 24.8 points, 5.5 rebounds and 3.9 assists through 32 games so far in his fifth season and well on course for a career year. He also has six 30+ point games to his name, including a career-high 42 against the Memphis Grizzlies and Philadelphia 76ers.

Brown’s role has taken a necessary step up this year following the departure of Gordon Hayward to the Charlotte Hornets and with Kemba Walker having missed the opening weeks of the season due to injury before returning shy of his best. The Celtics have lost 14 of their last 25 outings as they seek to build on reaching the Eastern Conference finals in 2019-20.

“I don’t feel very much like an All-Star,” Brown said. “I think this is the most I’ve lost since I’ve been here as a Celtic. We’ve got to find ways to win.”

Besides increasing his production as a creator alongside fellow All-Star Jayson Tatum, Brown has also looked to improve his contributions on defense.

It always felt like it was coming, but Zach LaVine is finally an All-Star, and deservedly so. The two-time Dunk contest winner will not just be dropping jaws with his air-time, but coming off the bench among the league’s very best.

In his seventh season in the league, the Bulls talisman is averaging 28.7 points (sixth), 5.2 rebounds and 5.1 assists in 35.6 minutes per game. Within that the 25-year-old is making a joint-fourth-most 3.5 three-pointers and a fifth-most 10.2 field goals per game.

LaVine had looked on course to prove himself as a star to the rest of the league before a torn ACL during the 2016-2017 season pressed pause on his career for the next 11 months, by the end of which he was playing for a new team with the Bulls having been traded by the Minnesota Timberwolves.

He will now also be vying to become the first player in NBA history to win both the dunk contest and three-point contest in his career as he takes part in the latter for the second straight year.

Watch the 70th NBA All-Star Game, along with the Dunk Contest, 3-Point Contest and Skills Challenge live from 11.30pm on Sky Sports Arena this Sunday