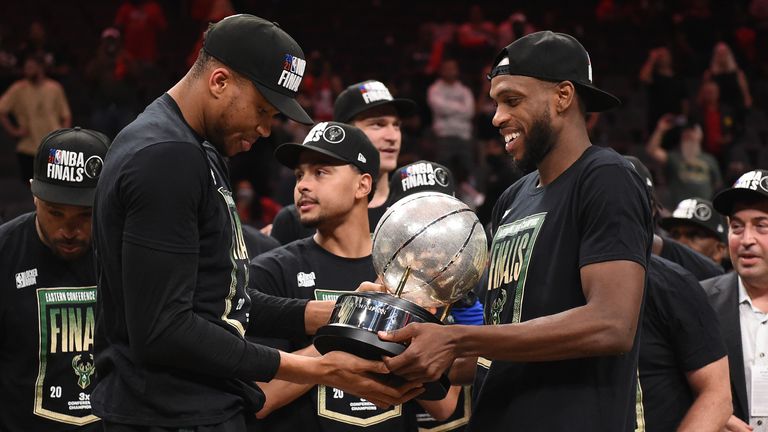 After looking so vulnerable on random nights over their two most recent playoff rounds, the Milwaukee Bucks were at their best when they actually were vulnerable the past two games.

Forced to play without their star, two-time NBA MVP Giannis Antetokounmpo, in both Games 5 and 6 of the Eastern Conference finals, the Bucks prevailed twice despite increasing degrees of difficulty.

The more daunting things got, the better they responded. Wire-to-wire victories, as in eight straight quarters without trailing even for a second. Now they are headed to the 2021 NBA Finals, dragging to Phoenix as much uncertainty about the Greek Freak’s availability but somehow, now, less about their ability to withstand that in Tuesday’s Game 1 (2am, Sky Sports Main Event and Arena).

It will be the franchise’s first trip to the championship series since 1974. Oscar Robertson and Kareem Abdul-Jabbar – a Suns sore point to this day over the 1969 coin flip they lost to the Bucks for his draft rights – were Milwaukee’s two best players then. Current coach Mike Budenholzer, 51, was 15 months old.

Imagine that team advancing with Kareem or Oscar missing the final two games of the conference finals. It seems almost too outlandish to try.

Yet here these Bucks are.

“What a roller coaster of emotions,” Budenholzer said after Saturday’s 118-107 clincher. “Just impressed with the resilience of the group, the character of the group. They just have a focus and an edge that’s put us in a good place, put us in an opportunity to keep playing.”

Their challenge Thursday had been disheartening enough: Antetokounmpo out with a hyperextended knee. Series tied 2-2. Milwaukee no longer favoured against precocious Atlanta. The Hawks eager to repeat what they had done so impressively in Game 4, when Antetokounmpo was around into the third quarter and coach Nate McMillan’s crew made sure that did not matter.

Circumstances were cranked up against the Bucks even more so Saturday: Still no Antetokounmpo. On the road now, with the Hawks’ youth less of a worry in familiar and supportive State Farm Arena. Trae Young, Atlanta’s breakout scoring star of this postseason, participating after sitting out two games with a bone bruise in his right foot. The home team backed into a corner, sheer fight or flight kicking in for a close-out game.

If Milwaukee could draw any positive from their increasingly perilous situation, it was the cold reality they no longer had any margin of error. They needed to play with precision, and be as close to perfect as they could get.

So there was Khris Middleton, taking over again the way he had in Game 3, only a little earlier. The Bucks’ smooth shooter scored his team’s first 16 points after half-time and 23 in the third quarter, staking them to a lead that stretched as fat as 22 points. More important, Atlanta never got closer than eight points – three possessions – with the ball from there.

There was Jrue Holiday playing as if scripted when GM Jon Horst acquired him before the season, aggressive on both ends on his way to 27 points, nine rebounds, nine assists and four steals.

There was Brook Lopez, the Bucks’ massive center revived, scoring 13 and posting a team-best plus-25. There was Jeff Teague even, the veteran point guard picked up as insurance, sticking it to the fans where he used to play with 11 points and three three-pointers.

Then, guess what? There was Antetokounmpo after all.

Not on the court, officially anyway, but all over the sideline. In the huddles and the locker room and the practice gym and on the buses and the flight. Antetokounmpo, in sweats and masked up, appeared to take as much joy in what his team-mates pulled off in Games 5 and 6 as if he had been the one out there dictating the plays and the outcomes.

“He was still there, and that speaks to the kind of guy he is,” said Pat Connaughton, the role player who had 13 points and eight rebounds off the bench. “It’s not just about his talent, it’s about his character and personal touch that he puts on everything and that’s why we wanted to, quote-unquote, ‘go to war’ for him.

“It’s because he’s been there every step of the way. Even when he’s been sitting on the bench, he’s been active, he’s been vocal, which is something I’ve seen him really grow in over the last three years. … He’s not just been vocal individually but he’s been vocal collectively to everybody before the games, during practice, plane rides, whatever it might be.”

A big part of the Bucks recovering from the emotional devastation of Antetokounmpo’s gruesome-in-replay knee injury was the remarkable news that, maybe, it was not postseason-ending for him after all. Then there was his work with Milwaukee’s highly regarded medical and training staff, visible and vocal with team-mates nearby, that really lifted the dark clouds.

Tuesday night was hard. Wednesday morning was brutal. Then Giannis brought the sunshine.

“Our concern at the time was like ‘Is he OK?’ and not really because of any game,” Connaughton said. “It’s more just the type of guy he is, we want to make sure he’s OK. Like as a person, a friend-to-friend, brother-to-brother, whatever you want to call it.

“As we found out he was OK and as he kind of exuded that confidence, he gave it to us as far as he is going to be OK and he’s going to work to be back. But regardless he’s going to be with us every step of the way.”

Mascots and cheerleaders do not win games in this league, definitely not at this level. But Antetokounmpo planted himself in the middle of everything. He had had the other Bucks’ backs all season long and he was not about to stop. They, in turn, had his.

“I think he probably almost got a delay of game,” Budenholzer said. “He’s coming off the bench, he’s halfway on the court. Talking to Bobby (Portis), talking to Brook, talking to different players. To see that kind of leadership, that kind of connection, that kind of commitment from a player you know would be dying to be out there and playing… I just loved his energy on the bench. I loved his, just, togetherness that he brings to our group.”

Young obviously was not healthy yet, his mobility hampered and his timing off. He finished with 14 points on 4-of-17 shooting in 35 minutes.

It might be that way if or when Antetokounmpo tries to come back in the Finals. Like everybody else in the Milwaukee organisation who was around, he is eager for a payoff for their rude departures the past two playoffs, losing four in a row against Toronto in the East finals in 2019 and getting ousted from the bubble a round earlier last year by Miami.

The Bucks learned, they changed, they grew and they responded when their hopes seemed most dim.

Milwaukee just went through another, and seems better off for it.

July 4, 2021 NBA Comments Off on Milwaukee Bucks finally break through after most vulnerable moment
NFL News