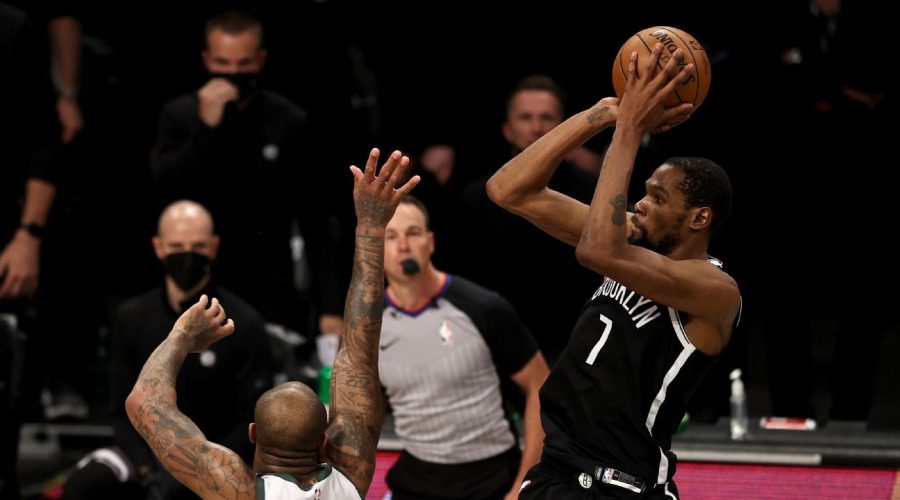 Zach Lowe (@ZachLowe_NBA) is a senior writer for ESPN Digital and Print.

As the 2018 NBA Finals wound toward a Golden State Warriors sweep and Kevin Durant’s second straight Finals Most Valuable Player award, I asked Durant about his unique status as a historic scoring great who was rarely his team’s No. 1 ball handler.

James Harden and Russell Westbrook, Durant’s former co-stars with the Oklahoma City Thunder, had grown into that role. Durant would never get to enjoy it with any consistency amid Golden State’s free-flowing offense — with Stephen Curry, Draymond Green, and Durant splitting the controls.

With the exception of Durant’s Slim Reaper scorched-earth campaign when Westbrook was injured in 2013-14, Westbrook controlled the ball more — even if Durant ruled crunch-time. The time of possession splits grew more pronounced toward the end of Durant’s time in Oklahoma City. That was at least in part intentional — a recognition of the limits in Westbrook’s skill set (his jump-shooting) and of Durant’s malleability as someone who could dominate on and off the ball.

“That’s what we want,” Nick Collison, the Thunder veteran, told me in 2016. “Russell’s decision-making has gotten really good. We want Kevin catching and attacking closeouts. He’s getting easier shots.”

During those 2018 Finals, Shaun Livingston racked his brain for a historic analog — an all-time great scorer who was his team’s undisputed best player, an MVP candidate, and yet often played as something of a floating second option in terms of ball control. He pitched Larry Bird.

Golden State’s coaches seemed optimistic Durant could play the role of Houston Rockets Harden at least as well as Harden — and lead his team far.

“You could absolutely build that kind of offense around him,” Steve Kerr told me.

“He can be that,” said Steve Nash, then a Warriors consultant — and Durant confidante — and now, of course, Durant’s coach with the Brooklyn Nets. “But he’s quite happy not being the alpha dog.”

Durant leaned on the scorer’s table as he contemplated the question. “Obviously it would be cool to have the ball in my hands the whole game and rack up numbers,” he said. “I can do that. But for me to utilize the full body of my talents, I can’t do that. I don’t have the energy physically to do that and still defend on the perimeter, block shots, rebound.”

You rarely hear athletes anywhere near Durant’s level say “I can’t” about anything. Durant didn’t conceive of “I can’t” as an admission of weakness. In an era in which defenders navigate thickets of pick-and-rolls and cover the entire floor, it is hard for one player to dominate both sides for full games, weeks, series. Durant takes pride in the non-glamour parts of his game — switchy defense, rim protection, closeouts so fast and precise they unnerve shooters, artful off-ball cutting.

Potential fatigue isn’t the only reason Durant spends time as a roving off-ball threat. He does it because he can. The ability to shift from on-ball to off-ball without losing an ounce of his impact — remaining a danger that draws multiple pairs of eyes — is a talent in itself, even if it is not the sort of talent that insists you notice it every second.

We often talk of superstars making teammates better. What we usually mean is they make the jobs of lesser players easier. Durant is the rare apex superstar who makes every other type of superstar better. He is maybe the greatest superstar amplifier of other superstars in NBA history. There are no diminishing returns pairing Durant with other stars. He can play with anyone, in any style. In 2016-17, Durant’s first season with Golden State, the Warriors added more new plays for David West than for Durant, Kerr told me.

And yet, perhaps the most important takeaway from Brooklyn’s shorter-than-expected playoff run is that Durant had to play the sort of ball-dominant role that has often eluded him — and did so at a level that should alarm the rest of the league.