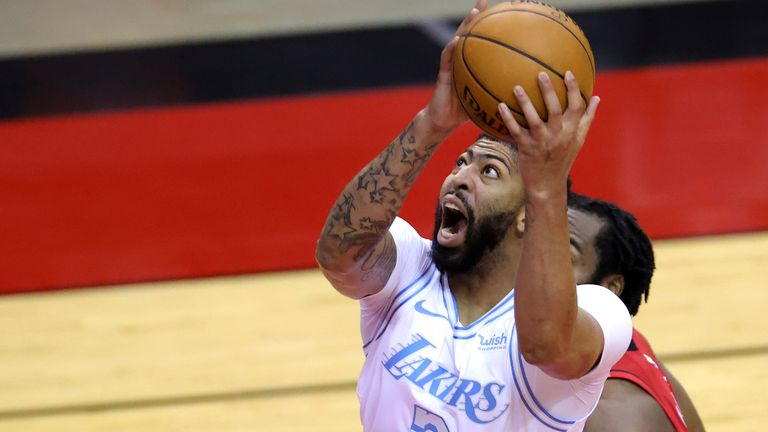 Anthony Davis scored 27 points and blocked three shots in his return from a one-game injury hiatus as the Los Angeles Lakers remained unbeaten on the road with a 120-102 victory over the Houston Rockets on Sunday.

Davis, who missed the Lakers’ win over the Chicago Bulls last Friday with a right adductor strain, started nine for nine from the floor, LeBron James added 18 points, seven rebounds and seven assists while Montrezl Harrell produced 16 points and eight boards off the Lakers bench.

Houston shot just 12 for 41 from behind the arc but used a 16-2 third-quarter run that featured eight points from Wood and a Harden three-pointer to claw their way back into contention, cutting what was once a 27-point deficit to 11 points.

However, the Lakers sandwiched a John Wall turnover with layups from Dennis Schroder and Kyle Kuzma in the fourth and reestablished a 20-point lead at 102-82 on another Kuzma layup.

The Lakers reeled off a 12-0 blitz in the first quarter to establish their cushion, surviving the ejection of Markieff Morris with 2:15 left in the period.

Davis and Talen Horton-Tucker (17 points) were instrumental in helping the Lakers to a 40-point second quarter, combining for eight consecutive points during one stretch in that period. Davis closed the half with 21 points on 8-of-8 shooting, with one missed free throw preventing him from achieving shooting perfection.

Leonard hit 14 of 22 shots, including 7 of 9 three-pointers, with a three-pointer in the third quarter allowing Leonard to top 10,000 career points.

Zach LaVine had a season-high 45 points, connecting on 10 of 16 three-pointers, seven rebounds and seven assists for the Bulls, who lost their third in a row.

It was the third consecutive game that LaVine scored at least 32 points. Garrett Temple had 18 points, Patrick Williams contributed 17 and Thaddeus Young scored 14 points. Coby White had a game-high 13 assists to go along with nine points.

A four-point play by Nicolas Batum gave the Clippers a 122-119 lead with 2:30 remaining and they never trailed again and while a three-pointer by LaVine had pulled the Bulls within 126-125 with 18.4 seconds left, two foul shots by George gave Los Angeles a three-point lead with 15.2 seconds remaining.

Donovan Mitchell scored 28 points and the visiting Utah Jazz continued their dominance over the Detroit Pistons with a 96-86 victory in which they never trailed and collecting their ninth consecutive victory over Detroit, a streak that began during the 2016-17 season.

The Jazz held a 57-40 lead at half-time after Mitchell had scored 13 first-quarter points as Utah raced to a 34-19 lead and maintained a double-digit lead throughout the second quarter.

Mitchell and Conley combined for 28 first-half points as their team shot 52.2 per cent from the field.

Grant was the main source of offense for Detroit, scoring 15 points but the Pistons were held to 32.6 per cent shooting and while the Pistons fought back to turn a 19-point deficit to just six it was not to be their night.

Shai Gilgeous-Alexander scored a season-high 31 points as the visiting Oklahoma City Thunder overcame a slow start and pulled away for a 129-116 victory over the Brooklyn Nets. 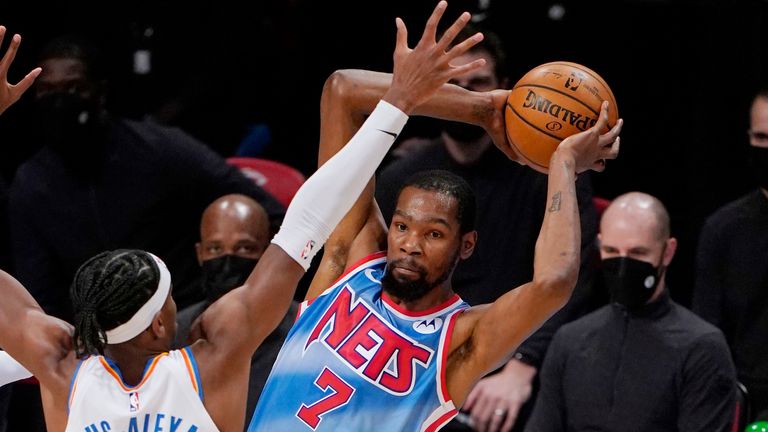 Reserve Hamidou Diallo added a career-high 25 points for the Thunder, who entered the game averaging 101.9 points and easily surpassed that total.

Al Horford contributed 22 as Oklahoma City rallied from 15 points down and outscored Brooklyn 100-75 after trailing 41-29 through the first quarter.

Kevin Durant returned from missing three games due to COVID-19 health and safety protocols and posted a double-double with 36 points with 11 rebounds as the Nets played their third straight game without Kyrie Irving (personal reasons) and lost for the sixth time in nine games.

Caris LeVert added 21 for Brooklyn, which shot 50.6 per cent and never led after Durant’s jumper with 4:51 remaining in the third.

Oklahoma City outscored the Nets 37-18 in the decisive third and regained the lead on a three-pointer by Lu Dort with 4:18 remaining that made it 79-78. The Thunder held a 94-81 lead into the fourth after hitting four three throws in the final 24 seconds following a flagrant foul by Brooklyn’s DeAndre Jordan.

Diallo picked up his fourth foul trying to stop Durant’s dunk with 4:56 left and the Nets were within 12 but after getting a foul called on Darius Bazley overturned with 4:06 remaining, the Thunder clinched the win on a turnaround hook by Horford for a 120-103 lead.

Nikola Jokic posted another double-double by finishing with 22 points and 10 rebounds for the visiting Denver Nuggets, who cruised to a 114-89 win over the New York Knicks.

Gary Harris had 14 points while Monte Morris and PJ Dozier scored 12 points apiece for the Nuggets, who won for the second time in a little more than 24 hours and have four victories in their past five games.

Julius Randle (29 points, 10 rebounds) recorded his eighth consecutive double-double for the Knicks. Elfrid Payton (12 points) was the only other New York player to get into double figures. Millsap then converted a traditional three-point play before Randle sank a three-pointer to give New York its final lead at 16-14.

The Nuggets answered with a 14-2 run that ended with Denver taking a 28-18 lead on Jokic’s three-point play before opening up a 19-point lead shortly before the midway point of the second quarter, when the Knicks missed their first eight shots from the field.

The Knicks never got closer than 14 points in the second half and trailed 82-64 after the third quarter. New York mounted an 8-0 run in which Randle scored five points to pull within 87-72 early in the fourth, but the Nuggets scored the next 10 points and led by at least 21 the rest of the way.

D’Angelo Russell scored 27 points, and Malik Beasley added 24 as the Minnesota Timberwolves made key plays down the stretch to outlast the visiting San Antonio Spurs in Minneapolis.

It was the second game of a two-day back-to-back between the teams and the 96-88 victory snapped a seven-game losing streak for the Timberwolves, who played without Karl-Anthony Towns who was held out as part of the team’s plan to ease him back after he returned Saturday after two weeks off to recover from a dislocated left wrist.

The game was tied at 81 after a hook shot by the Spurs’ LaMarcus Aldridge with 4:54 to play. Minnesota then ran off seven of the next nine points to take control.

San Antonio pulled to within 92-88 with 56.9 seconds left but missed five shots down the stretch, allowing the Timberwolves to close out the win at the free throw line in the final 31 seconds.

The loss snapped a three-game winning streak for the Spurs, who were without leading scorer DeMar DeRozan and Lonnie Walker IV racked up a season-best 25 points, 22 of those in the first half, to lead the Spurs, with Aldridge scoring 20.

Damion Lee calmly dropped in two free throws with 4.3 seconds remaining as the host Golden State Warriors overcame one of the worst shooting performances of Stephen Curry’s career to record a 106-105 victory over the Toronto Raptors in San Francisco.

Curry made his first and last attempts, but missed a personal-record 14 straight in between on an 11-point night for the Warriors, who nonetheless won for the fourth time in their last five games.

Lee, who is Curry’s brother-in-law, was fouled as he prepared to take a desperation three-point shot with Golden State trailing by one in the final seconds.

A career 85.3 per cent foul shooter, Lee then gave the Warriors their final advantage in a game they led most of the way, including by 17 points in the first minute of the fourth period.

Seeking a second straight win for the first time this season, the Raptors had a shot at a victory, but Pascal Siakam rimmed out a buzzer-beating, straight-way 18-footer.

Want to watch even more of the NBA and WNBA but don’t have Sky Sports? Get the Sky Sports Action and Arena pack, click here