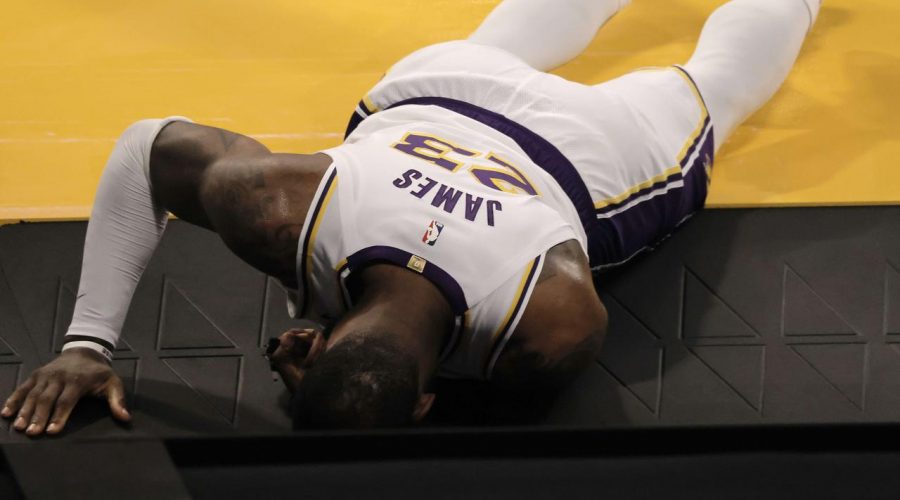 The Los Angeles Lakers have been dealt a major injury blow, with superstar LeBron James limping off the court during Sunday morning’s clash against the Atlanta Hawks.

During the second quarter at the Staples Centre, James collided with Hawks rivals Solomon Hill, who was attempting a steal, and toppled onto the floor in considerable pain.

The 36-year-old remained on the deck grabbing his ankle and screaming in agony before slowly making his way off the court.

James briefly rejoined the contest and scored a three-pointer before calling a timeout and heading to the locker room, where he tossed a chair over in frustration.

As revealed by The Athletic’s Shams Charania, the four-time NBA All-Star has been diagnosed with a high right ankle sprain, and will be out of action indefinitely.

Bron appears to turn his ankle, stays in the game and hits a three, then heads to the locker room pic.twitter.com/OdTrDW77o1

Dennis Schröder said it was an “unnecessary play” for Solomon Hill to dive into LeBron’s right leg the way he did.

I don't think LeBron did it on purpose but it's hilarious to think he wasn't going to let that double digit scoring streak end on Saturday afternoon because Solomon Hill dove for a loose ball.

Los Angeles teammate Kyle Kuzma said: “I haven’t necessarily seen him scream and squall like that, probably ever, not even with that groin (injury in 2018). It had to hurt a little bit, for sure.”

Speaking to reporters after the game, Lakers teammate Montrezl Harrell called out Hill for the play: “I really don’t feel like it was a loose ball.

“He had to go through his legs to get the ball … I don’t feel like he tried to do it, but those are the things that you should look at.”

The Lakers are already without Anthony Davis, who has been sidelined since February with a right calf strain.

Atlanta secured a shock 99-94 victory over the defending champions on Sunday, improving their season record to 22-20.

Since Nate McMillan took over as head coach, the Hawks have won eight consecutive NBA games and risen in fifth spot on the Eastern Conference ladder.

John Collins registered a game-high 27 points and 16 assists, while Harrell managed a team-high 23 points and 11 rebounds for the Lakers.

James finished with 10 points, four assists and a rebound during his 11 minutes on the court.

He has been averaging 25.8 points, 8.1 rebounds and 8.0 assists this season, and remains a genuine contender to claim a fifth NBA MVP accolade.

James has now scored at least 10 points in 1036 consecutive games — an NBA record.

The Lakers will next face the Phoenix Suns on Monday afternoon AEDT.