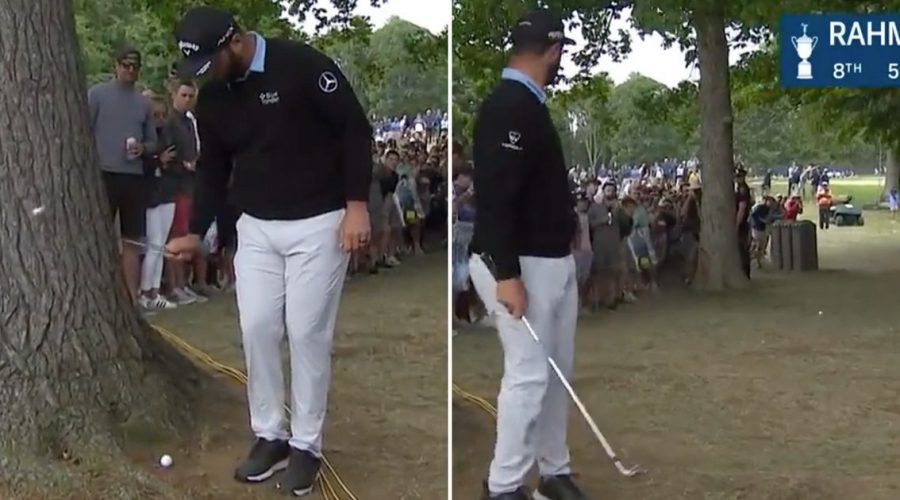 World number two golfer Jon Rahm found himself in a sticky situation at the US Open when he hit a drive that left his ball nestled underneath a tree on the eighth hole.

Rahm practiced a number of potential shots as he attempted to find a way out of trouble, including left and right-handed swings. However, the Spaniard ultimately decided to take the shot backwards, with the ball travelling less than 20 yards towards the green.

In the end, Rahm was forced to settle for a bogey on the hole and the wayward drive could cost him. The 27-year-old is the defending US Open champion and currently one shot behind joint leaders Matt Fitzpatrick and Will Zalatoris.

It is not the only moment of drama Rahm has been involved in at this year's tournament, having had his ball stolen by two kids during the opening round on Friday. After teeing off on the final hole, Rahm saw two kids sneak onto the fairway and run off with his ball.

"I am 100 percent sure I saw the two kids that stole it," he said while laughing. "Somebody – I'm pretty sure I know who it was.

"I recognized the two kids that were running the opposite way with a smile on their face." As a result of the incident, Rahm was given a free drop.

What's the most ridiculous shot you've ever seen on the golf course? Let us know in the comments section.

"I'm just really happy somebody spotted the ball first," he continued. "We knew exactly where it was.

"Off the tee I was comfortable. I was past all the trees. … After the free relief, I had 135 yards to the pin, in an area where the rough wasn't that thick.

"I don't think they expected anybody to hit it there or be around there, so I was able to drop it in an area that was a little downgrain, and I wasn’t in jeopardy of carrying the bunker. That wasn’t really a concern."