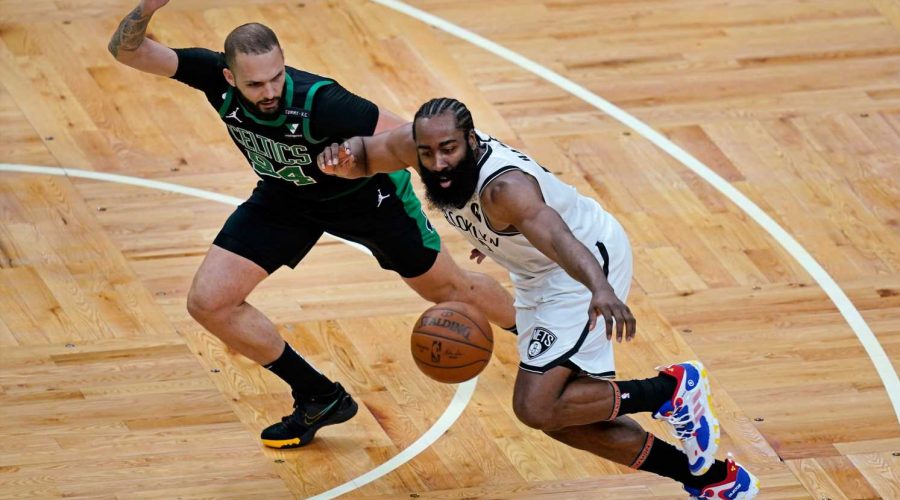 The Harden Vol.  5 "Manila Heritage" shoes will hit the market on the 123rd Independence Day of the Philippines, paying homage to the basketball fandom the NBA and stars like Harden have cultivated overseas.

Filipino toy designer, illustrator and graphics artist Juanito "Quiccs" Maiquez designed the shoe, which features many details tying back to his heritage.

For one, the brightly-colored shoe boasts the red, yellow and blue of the Philippine flag. It also features  a "+63" on the sole representing the Philippine country code, one of Quiccs' signatures, and the date "06.26.19." It was the last time Harden visited the country on a promotional tour.

The sneakers worn by James Harden #13 of the Brooklyn Nets during the game against the Boston Celtics during Round 1, Game 3 of the 2021 NBA Playoffs on May 28, 2021 at the TD Garden in Boston. (Photo: Brian Babineau, NBAE via Getty Images)

"The colors of the Philippine flag are very dynamic," Quiccs told ESPN. "In terms of design, it's dynamic in the sense that it's quite easy to play with. It instantly becomes an eye catcher."

The drop will also feature other apparel items featuring artwork by Quiccs, who has been working with Adidas since January 2020.

Harden debuted the shoes in Game 3 of the Nets' first-round series against the Boston Celtics. He logged 41 points and 10 assists; despite Brooklyn losing that game, it went on the win the series 4-1. Quiccs, who hadn't known Harden would be wearing the shoes for the game, told ESPN he and his sister were taking screenshots of the game stream.

The sneakers worn by James Harden #13 of the Brooklyn Nets against the Boston Celtics during Round 1, Game 3 of the 2021 NBA Playoffs on May 28, 2021 at the TD Garden in Boston. (Photo: Nathaniel S. Butler, NBAE via Getty Images)

The Nets have been without Harden in the Eastern Conference semifinals after a hamstring injury he suffered in Game 1. Brooklyn is leading the series 2-1 after Thursday night's loss to the Milwaukee Bucks. It is unclear if Harden will be available for Game 4 on Sunday.

Harden's shoe line debuted in 2016 with the Harden Vol. 1 sneaker with the colorway "Imma Be a Star," a simply black shoe with gold detailing. The Harden Vol. 5 "Manila Heritage" sneakers will retail around $150.