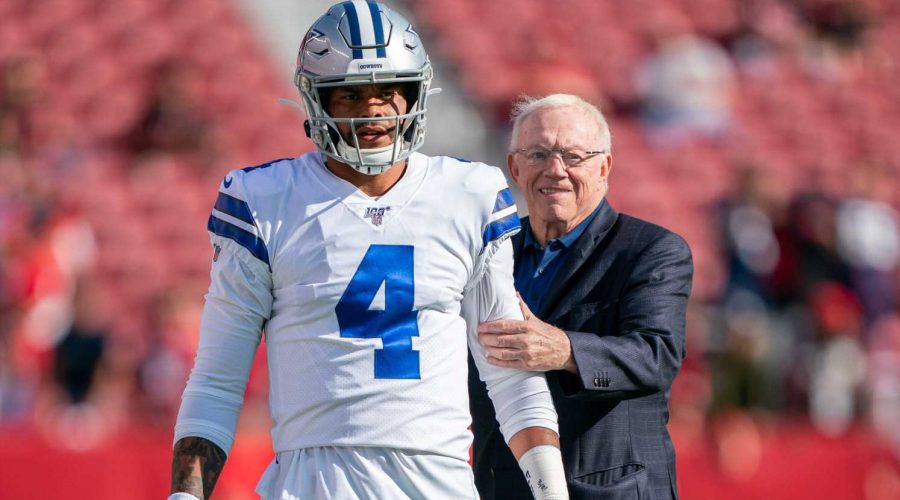 This is the Morning Win by Andy Nesbitt.

Jerry Jones and the Dallas Cowboys are usually busy playing the role of the goofy soap opera team in the NFL that always attracts a lot of attention even while stumbling through countless mediocre seasons that don't end with the sniff of a playoff win, yet alone a trip to the postseason.

It's just who they've become under the successful oil man who has always enjoyed making things about him.

That's why what happened on Monday was so stunning to see – the Cowboys agreed on a record-setting 4-year deal with QB Dak Prescott that will pay him $160 million, including $126 million guaranteed.

What's so crazy about that?

The fact that the Cowboys did the right thing!

Dak is a franchise QB and one of the best QBs in the league. He's proven himself since his rookie year, when he went 13-3, that he's the man to lead this crazy franchise which, again, gets way too much attention than it deserves.

Dak's season last year came to a devastating end with a gruesome ankle injury suffered in Week 5 against the Giants. Many feared that injury would lead to him not getting the big deal he deserved with the Cowboys because, well, Jerry Jones is in charge of the Cowboys and he hasn't made the best/smartest decisions during his time as owner.

In recent years Jones made a mess of Jason Garrett's employment with the team over his final couple of seasons before taking forever to fire him days after the 2019 season. Then Jones went out and hired Mike McCarthy, who admitted that he lied a little bit during his job interview.

My pal Steven Ruiz very happily pointed out that Jones cost himself more money by betting against Dak and losing, which is absolutely correct.

And that makes this deal all the more awesome for Prescott, who celebrated afterward by sharing a special moment with his big brother. Dak has long deserved the big pay day and now he's received it and broken a record while doing it (the guaranteed money is the most ever in the NFL).

The Cowboys did the right thing for them, too, because now they don't have to worry about going to find someone else to not only be their starting QB, but to be a successful starting QB.

If we've learned anything over the years it's that your team will sink without a good QB…  and not just for a season, but for as long as it takes for you to find a good QB and get a good team around him.

It's not hard to figure out.

Which makes it all the more impressive that Jones was able to do just that and make sure Dak doesn't leave Dallas.

March 9, 2021 NBA Comments Off on It always feels weird when Jerry Jones and the Cowboys do the right thing
NFL News