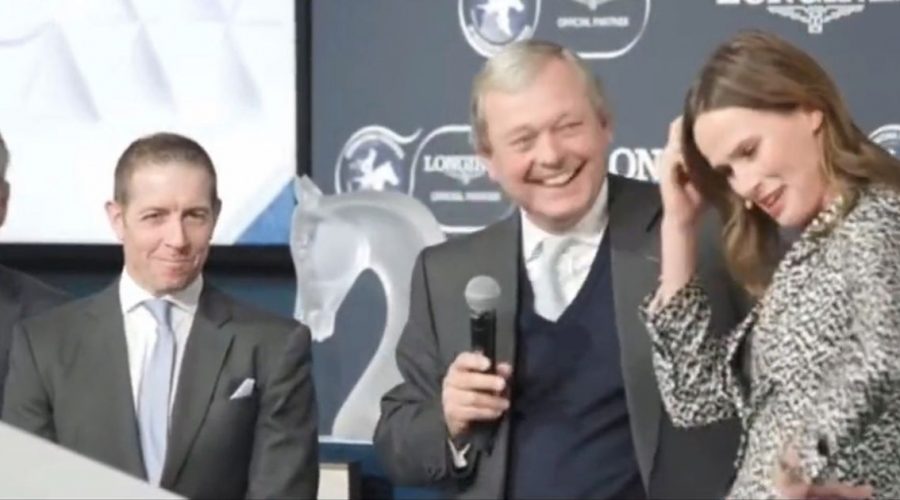 Horse racing trainer William Haggas made a female awards presenter very uncomfortable by mentioning her pyjamas in what appeared to be an ill-advised joke.

Haggas was picking up an award from the Longines World Racing Awards before he made the comment. It was in recognition of his outstanding campaign training Baaeed, who was named the highest rated turf horse in the world in 2022.

Baaeed became the first turf horse since the legendary Frankel to receive a rating of 135 this year. However, this has almost been forgotten about as a result of Haggas’ remark.

While Baaeed was named the Best Turf Horse of the year, he was pipped to the gong of Best Racehorse by Flightline. The US wonder horse was awarded a top rating of 140, the very same mark as the legendary, 14-race unbeaten horse Frankel achieved in 2022.

He may have finished behind the American, but Baaeed still recorded a normally flawless 135 rating after managing to win 10 of his 11 career starts. It may not have knocked Flightline off the top spot, but it was still the highest rated turf horse in 2022.

Unfortunately, Baaeed's achievements were arguably over shadowed on the day by Haggas. He took the microphone on stage and said, “It’s a shame Flightline did not see you in your pyjamas in Australia. It might have distracted him,” as an air of awkwardness and discomfort began to radiate amongst the atmosphere.

What was your favourite moment of the racing campaign? Let us know in the comments section below

Needless to say, the presenter was left flustered and taken aback by the comments made by the trainer, who was invited to the funeral of Her Majesty, Queen Elizabeth II last year.

She initially tried to fill the awkward silence with laughter, but there was a clear air of discomfort in the room.

“Okay, I wasn’t expecting that one,” the presenter said while taking in an intake of breath. "Right, where do we go from here?”