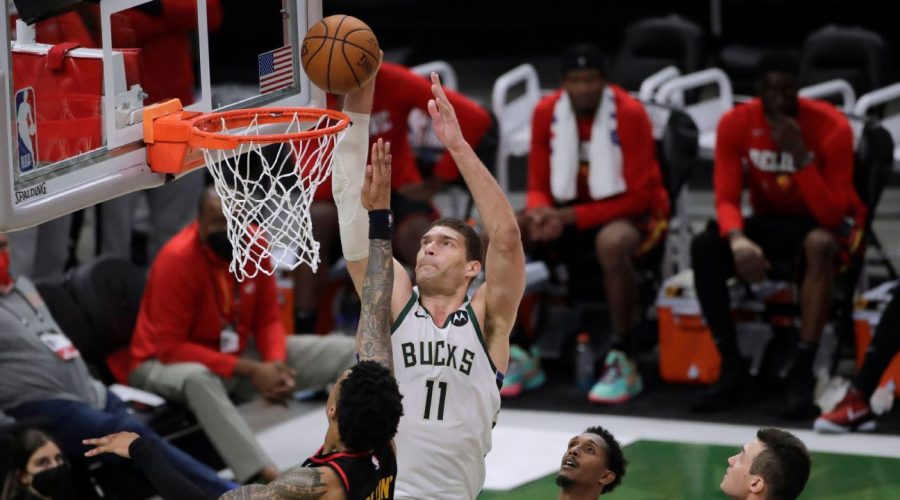 MILWAUKEE — Even if superstar guard Trae Young hadn’t sat out for a second straight game, the Atlanta Hawks wouldn’t have been able to stop the Bucks’ relentless assault on the rim Thursday night in Milwaukee’s 123-112 win in Game 5 of the Eastern Conference finals.

The win moved the Bucks, who also were without their own superstar in forward Giannis Antetokounmpo, to within one victory of their first trip to the NBA Finals in nearly 50 years.

If the Hawks can’t find a solution defending the paint, their season very well might be over whether Young returns or not from a deep bone bruise in his right foot.

“We knew that they were going to come with that sense of urgency tonight,” McMillan said. “They were going to continue to attack even without Giannis in the lineup. That’s just how they play. … They just dominated the paint tonight.”

In Game 4, Atlanta played its best defensive game of the series, holding the Bucks to 44 points in the paint after allowing an average of more than 60 in each of the first three games of the series.

In Game 5, however, things immediately reverted back to the way they’d been earlier in the series. Even with Antetokounmpo sitting out with a hyperextended left knee, the Bucks exploded for 28 points in the paint in the first quarter and 44 at the half, equaling their total in all of Game 4.

“They were more physical,” McMillan said. “They hit us in the mouth, and we just did not recover from that.

The Hawks entered Thursday night’s game hoping to repeat the effort they gave in Game 4 without Young at Atlanta’s State Farm Arena. But it didn’t take long to see it was going to be a much different kind of game at Fiserv Forum.

In a complete reversal from Game 4, when the Hawks jumped out to a 10-2 lead and forced a timeout, the Bucks did the exact same thing in Game 5, making four straight shots to open the game.

The Bucks couldn’t have started any better in their first full game without Antetokounmpo. And the Hawks, after opening the playoffs with a 6-2 record in road games, including three Game 1 victories, finally looked like the young and mostly inexperienced team that they are.

The Bucks made a point of pounding the Hawks inside. Even without Antetokounmpo, Milwaukee still has several size advantages across the court, led by Brook Lopez at center.

While Lopez has become known as a floor-spacing big in recent seasons, he began his career as one of the best low-post scorers in the league with the Brooklyn Nets. He returned to those roots in Game 5, repeatedly overpowering Hawks starting center Clint Capela and his backup, rookie Onyeka Okongwu, for scores.

Lopez made several completely unguarded forays to the rim for massive slams on his way to 33 points on 14-for-18 shooting in 37 minutes.

“I don’t know why we came out flat, but we did and it hurt us tonight,” Hawks forward John Collins said. “[In] the NBA, sometimes stuff happens.”

That opening push left the Hawks, who trailed by as many as 20 points in the first quarter, fighting an uphill battle. But Atlanta slowly managed to get back in the game, clawing back to within nine at halftime.

But rather than pull off another epic comeback, as they did in their 26-point comeback against the Philadelphia 76ers in Game 5 of the Eastern Conference semifinals, the Hawks instead spent the second half continuing to get pummeled into submission by the bigger, more physical Bucks.

Milwaukee got a career-playoff high 22 points from Bobby Portis, Antetokounmpo’s replacement in the starting lineup, along with 25 points and 13 assists from Jrue Holiday and 26 points, 13 rebounds and eight assists from Khris Middleton.

“I know we are fearless, and I know we are tough,” said Hawks guard Bogdan Bogdanovic, who had a second straight impressive game for Atlanta (28 points, five rebounds, four assists) and was arguably the team’s lone bright spot. “I know we’ll respond.”

Now, as the series shifts back to Atlanta with their season on the line Saturday night, the Hawks will wait to see if they can get Young back on the floor after missing the past two games.

Shortly before he was ruled out, Young emerged from Atlanta’s locker room wearing a hoodie and got up some jumpers, including some floaters, to test whether he felt comfortable enough on the foot to give it a go. Ultimately, McMillan said, Young didn’t.

Atlanta’s hope is that, with another 48 hours of rest, recovery and treatment, Young will be ready to go for Game 6, though McMillan said he still expects Young to once again be a game-time decision.

Either way, though, the Hawks are going into a do-or-die game knowing they have no choice but to play harder defensively. Otherwise, they’ll be headed home for the summer.

“They definitely got us in the paint,” Hawks forward Danilo Gallinari said. “If we want to win a game, we need to definitely get better with that.”