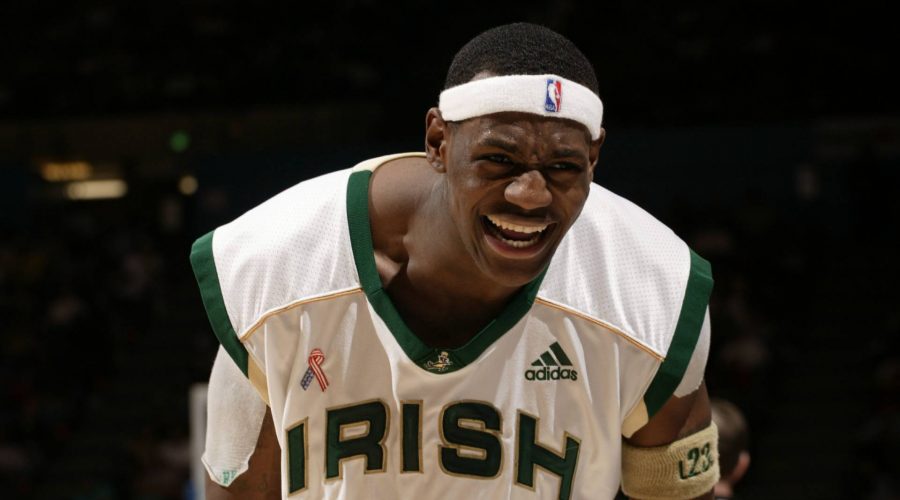 There will never be another phenomenon quite like LeBron James in high school.

Long before the age of social media and YouTube highlights, James was a household name by his senior year at St. Vincent-St. Mary High School in Akron, Ohio, where he lettered in both basketball and football. Yes, plenty of high school sensations have come since James, but the phenomenon isn’t quite the same.

Think I’m kidding? James was such a big deal that some of his high school games were televised nationally. On one occasion, the pregame teaser compared a high school LeBron to the likes of Kareem Abdul-Jabbar, Magic Johnson, Michael Jordan and Oscar Robertson.

Perhaps the most impressive part of it all is that James has continuously exceeded the expectations levied upon him.

As SN revisits James’ prep career, take a look back at his five biggest performances on the hardwood.

It wasn’t James’ most efficient game, but he flirted with a triple-double as he led St. Vincent-St. Mary to a win over California’s Mater Dei High School in an ESPN game played at UCLA’s famed Pauley Pavilion.

Five months later, James would be right back on ESPN as he was selected first overall by the Cleveland Cavaliers in the 2003 NBA Draft.

The rest, as they say, is history.

As a 15-year-old freshman, James helped lead St. Vincent-St. Mary to the first of three state titles won during his high school career with this performance against Jamestown Greeneview High School.

Not very many freshmen get to play varsity ball and even fewer make the impact that James did. This performance is the perfect example of that.

Two weeks after celebrating his 18th birthday, James set a then-school record with a 50-point performance in a win over Mentor High School.

As a prospect, James wasn’t thought of as a knockdown shooter, but in this one, he knocked down 11 3s at a blistering 64.7 percent clip. Weeks later, LeBron would break his own record with the performance that lands at No. 1 on this list.

After losing to national powerhouse Oak Hill as a sophomore and junior, James finally led his team to a victory over the No. 1 team in the nation (on ESPN2, no less.)

In the first-ever high school game broadcasted by the national sports leader, a 17-year-old James did what we’ve become so accustomed to seeing him do on a national stage, flirting with a triple-double to showcase his multifaceted game.

Not bad for your first time on national TV.

But it wasn’t just any team.

From an early age, LeBron has set the bar for us to expect the unexpected.

November 22, 2021 NBA Comments Off on Five times LeBron James proved he was a generational talent in high school
NFL News