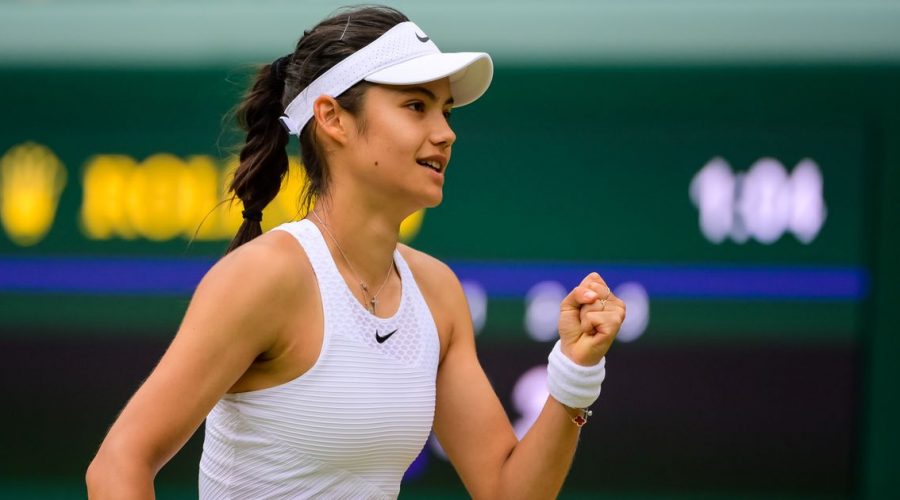 British tennis’ latest star Emma Raducanu, 18, is set to soar in many ways: in the tennis world rankings, in her status as a professional athlete, in her fame and in her riches.

She became the youngest British player to reach the fourth round of the women’s singles since Christine Truman in 1959 when she beat world number 45 Sorana Cirstea of Romania in straight sets on Saturday and is set to take on world number 75 Ajla Tomljanovic of Australia, in the hope of reaching the last eight.

She has already earned £181,000 from her Wimbledon heroics, six times more than her career earnings and Mark Thomas of celebrity management firm TM Media believes there is more to come.

“Emma has a glittering future.

“It’s so exciting; she has literally every single thing sporting sponsors are looking for in an up-and-coming icon.

“The world is at her feet.”

Many believe Raducanu has the potential to be the next Maria Sharapova – the Russian tennis star rose to stardom at the age of 16 when she reached the fourth round of Wimbledon in 2003, before going on to win the tournament the following year, beating Serena Williams in the final.

Raducanu is still only a teenager and was sitting her A-Levels in maths and economics just a few weeks ago.

What have you made of Emma Raducanu's performances at Wimbledon so far? Let us know in the comments below.

She grew up in Bromley but was born in Canada to a Chinese mother and Romanian father and is currently coached by Andy Murray’s father-in-law, Nigel Sears, who says she was “born to play tennis,” and added he “knew she was exceptional the first time I saw her.”

She’s also got a fan in Liam Gallagher, who tweeted earlier today: “Get on the Les Dennis today and get behind Emma Raducanu celestial talent.”