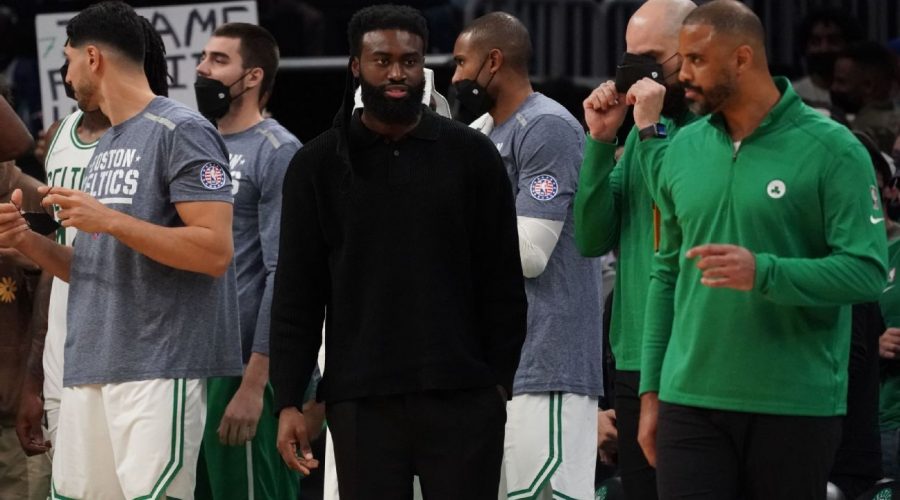 BOSTON — The Boston Celtics had forward Jaylen Brown back in the lineup for the first time in two weeks Monday against the Houston Rockets after he missed the prior eight games with a right hamstring strain.

“He’ll be on limited minutes,” Celtics coach Ime Udoka said before the game. “[We’ll] try to keep him around 24 minutes — probably four six-minute stints. Keep it lower, keep him away from fatigue.

“We’ll monitor that, just see how he feels.”

Udoka said that Brown, who was questionable Friday against the Lakers before being ruled out for both that game and Saturday’s matchup with the Oklahoma City Thunder, has been able to get some work in on the court over the past several days in advance of his return, allowing him to reacclimate himself with the starting lineup.

In addition to Brown, the Celtics got starting center Robert Williams back Monday, after he missed the prior 2½ games with knee soreness. Udoka said there wouldn’t be a cap on Williams’ minutes, but that he would try to keep him under 30 minutes against Houston.

“He’s really fine,” Udoka said. “It’s more so a pain tolerance until he can get his knees feeling well. So it’s not a restriction same as Jaylen, but we’d like to see him on the lower side of 30 if possible if it dictates what the game has.”

While Boston got Brown and Williams back, the Celtics were without Josh Richardson, who missed the game with a non-COVID illness.

“Story of the year: Get one back, get one who’s missing,” Udoka said.

That constant shuffling of players in and out of the lineup has led to Boston’s biggest challenge: developing chemistry for its group.

“Just the chemistry in the missed time,” Udoka said. “We haven’t had a ton of continuity all year so that doesn’t change much because guys have been in and out. But he’s a guy that also knows his role and we have sets for him and he’s going to come out and be aggressive. So it’s pretty easy for him to find his spots, but more so with other guys getting used to him getting back and him getting used to what we’ve been doing in the time he’s been gone.”