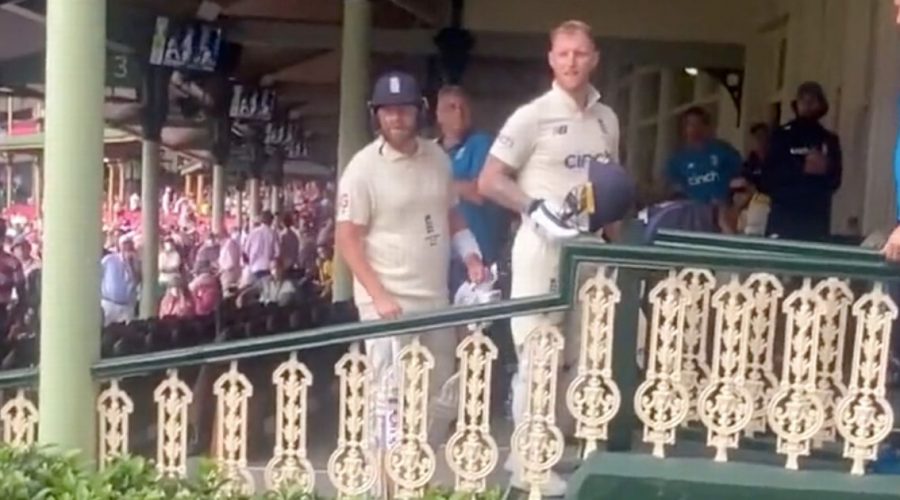 England cricket pair Ben Stokes and Jonny Bairstow confronted an Australia fan after he targeted them with abuse about their weight.

Stokes and Bairstow were headed into the dressing room after fighting back from a dismal start to the third day of the fourth Ashes Test.

They had steadied the ship after the Aussie attack had carved through the tourists' opening order, leaving them 36-4 in their first innings.

As they walked up the stand they were met with taunts of "Stokes you're fat" and "take off your jumper Bairstow, lose some weight Bairstow".

Stokes stared the offender down and his team-mate shouted to get their attention.

Bairstow then responded: "That’s right. Just turn around and walk away. Weak as p***."

He had the last laugh as after the break he returned to the crease and registered his seventh Test cricket century to give England hope of getting close to Australia's 416-8 opening score.

Once he had finished the day on 103 not out, Bairstow said: "It was just a bit of bad-mouthing from the crowd, it’s not the greatest, and it’s not needed.

Where is the line with crowd taunts? Let us know in the comments section.

"We’re out there trying to do our jobs, people are out there enjoying the day’s cricket. Unfortunately, sometimes you have people who overstep the mark.

Three fans were ejected from the Sydney Cricket Ground after police had addressed several individuals.

No charges were made in relation to the incident.

And Bairstow made light of them missing out on what was England's first century of the disastrous series down under.

"It’d have been nicer if we were there giving it when we walked off at the end, wouldn’t it?" he said.

"Unfortunately, they weren’t there at the end, they missed the end of a fantastic day of Test cricket."

January 7, 2022 NBA Comments Off on Ben Stokes and Jonny Bairstow bite back at ‘fat’ jibes from Australia fans
NFL News