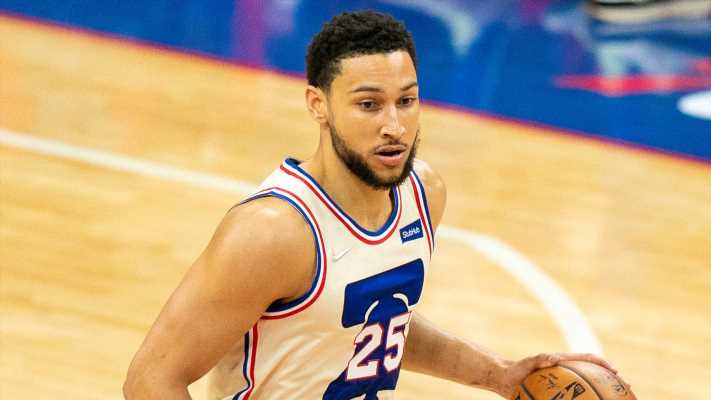 Ben Simmons helped the Philadelphia 76ers crush the San Antonio Spurs on Sunday, but he saved his biggest shot for the postgame.

Simmons fired back at a Washington Wizards broadcaster who called him " overrated" during a telecast Friday. Simmons said the criticism from Justin Kutcher of NBC Sports Washington "is what it is" and brushed it off with a jab at Kutcher.

"I see a lot of (expletive) on the internet," Simmons said. "I scrolled through his Instagram and saw who he was. It is what it is. He's like a 5-foot-5 commentator for the Wizards. I can't give it too much attention. … Everyone has their voice and they can say what they want, but it is what it is."

Ben responds to the “overrated” chatter and takes no prisoners 👀😂 pic.twitter.com/Y6XnVzAvZE

Kutcher made the comment during the Sixers-Wizards game Friday that Simmons missed due to COVID-19 contact tracing.

"I think Ben Simmons is one of, if not the most, overrated players in the NBA," Kutcher said.

After his remarks made the rounds on social media, Kutcher took to Twitter later Friday to defend himself and reiterate his criticism, saying Simmons is "just not as good as everyone makes him out to be," and his accolades are "based on hype."

Simmons responded Saturday by posting a photo of Kutcher to his Instagram Story and calling him "another casual."

For the season, Simmons is averaging 16.0 points, 7.8 rebounds and 7.7 assists on 58.1% shooting from the field. He's helped the Sixers to the best record in the Eastern Conference at 27-12.

Here are four more things to know today in the NBA:

After a rough start to the season, the Miami Heat are one of the hottest teams in the NBA, and Jimmy Butler is once again putting them on his back. Butler scored 29 points Sunday to guide the Heat to a 102-97 victory against the Orlando Magic, their 10th win in the last 11 games. Butler is averaging 25 points during the streak as Miami has climbed to fourth place in the Eastern Conference. And they hope to welcome back Bam Adebayo from knee tendinitis soon.

“Just find a way to win…at the end of the day, that’s the reason that we play.”

Steph Curry turned 33 on Sunday and had quite a celebration. He got some slick new shoes from his kids. Then he scored 32 points in the Golden State Warriors' 131-119 win over the league-leading Utah Jazz. Curry capped the day with an adorable postgame moment with his 2-year-old son Canon.

For his birthday, Steph Curry had 32 points, a Warriors win and the adorable postgame moment with his son Canon 🎂😍

The Boston Celtics rolled past the Houston Rockets 134-107 on Sunday to open a key stretch of nine games in 14 days. There are some tough opponents on tap for Boston, including Tuesday against the Utah Jazz and two road games next week against the Milwaukee Bucks. Boston is finally healthy and has a complete rotation to start the second half. A strong showing the next two weeks could elevate the fifth-place Celtics into the top half of the East playoff race.

Game of the night: Knicks at Nets

The New York rivals face off Monday at Barclays Center in a matchup of contrasting styles. The Nets' high-octane offense leads the league in scoring. The Knicks allow the fewest points in the NBA. Brooklyn has won 12 of 13 to establish itself as one of the top contenders in the East. The Knicks enter Monday seventh in the East and in the thick of the race for the play-in tournament.

March 15, 2021 NBA Comments Off on Ben Simmons fires back at broadcaster who called him overrated: ‘He’s a 5-foot-5 commentator’
NFL News