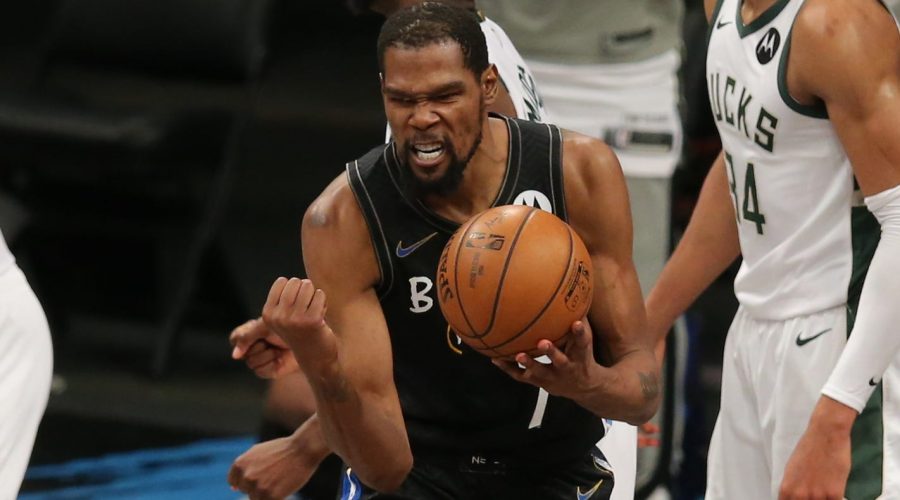 Nothing in the first quarter indicated Kevin Durant had an all-time performance in him.

By the time 48 minutes elapsed in Game 5 between the Brooklyn Nets and Milwaukee Bucks, Durant had produced one of the best playoff performances in NBA history.

Durant and the Nets overcame obstacles: no Kyrie Irving, James Harden slowed by a hamstring injury and a 17-point deficit.

But those issues can be erased when one of the game’s best ever does this: 49 points, 17 rebounds, 10 assists, three steals and two blocks. He made 16 of his 23 shots, four of nine 3-pointers and 13 of his 16 free throws in an incredible display of efficiency.

The Nets deflated the Bucks with a 114-108 victory on Tuesday, taking a 3-2 lead in their Eastern Conference semifinal series.

Kevin Durant played all 48 minutes in a game for the ages to lead the @BrooklynNets back from 17 down and put them up 3-2. #ThatsGamepic.twitter.com/TAB5AFFdj4

Durant recorded his second career playoff triple-double and became the first player in NBA history to have at least 45 points, 15 rebounds and 10 assists in a playoff game.

Durant maintained a measured evaluation of his effort.

"We’ve got another game. We’ve got to travel and we’ve got a Game 6. I can’t celebrate because we won the game."

"Historic, historic performance. … It’s ridiculous what he’s able to do," Nash said. "We know he’s capable of nights like this, but to do it tonight — we lose Ky, James obviously is soldiering through his ailments, we’re down bodies, we’re wounded and for him to have the toughness, the mentality, that’s what makes him one of the all-time greats. This is a signature performance for Kevin, and it was beautiful to watch."

Beautiful and a joy. "Big-time players show up in big-time games," Nets forward Jeff Green said, "and that’s what he did."

Kevin Durant on playing all 48 minutes, his team’s toughness and their halftime adjustments after his 31-point 2nd half powers a 17-point comeback victory to put the @BrooklynNets up 3-2. #ThatsGame#NBAPlayoffs

He also played every minute and every second, taking a rest only between quarters and during timeouts and perhaps catching a breather during a free throw, coach’s challenge or replay review.

"It’s not ideal, what can I tell you, but if we didn’t play him 48, we probably weren’t winning," Nash said.

Just two days after Brooklyn’s Game 4 loss, Nash said the Nets were a little too singled-minded in relying on Durant to bail them out.

In Game 5, they had to get the ball to Durant and let him make plays. Single-minded was the only way to go.

How does a special game take shape? Durant had seven points and five rebounds in the first quarter, but the Nets were down 29-15 after one. He had 11 points in the second quarter and 18 points, nine rebounds and three assists at halftime. Still, the Bucks were up 59-43.

When do you know something special is happening? Durant’s first points of the third quarter — a layup — cut Milwaukee’s lead to 76-62. Three consecutive assists followed by a layup put another dent in the deficit. He scored Brooklyn’s final seven points of the third, and the Nets were down just 87-81. Had 11 points, six rebounds and five assists in the quarter.

The @BrooklynNets can advance to the Eastern Conference Finals with a win on Thursday at 8:30pm/et on ESPN. pic.twitter.com/JOeEOuzoAn

There wasn’t a person watching who didn’t sense the moment percolating.

Two free throws and two 3-pointers from Durant early in the fourth gave Brooklyn a 97-96 lead. His 3-pointer with 50.5 seconds left — just before the shot clock expired — put Brooklyn up 109-105. One of the game’s most gifted scorers had 20 points in the fourth, helping the Nets secure the victory with three free throws in the final 15 seconds.

Like Nash said, it’s not exactly a surprise coming from a two-time NBA Finals MVP and one-time regular-season MVP. But it’s also memorable because Durant ruptured his Achilles tendon in the 2019 Finals, missed last season and returned this season only to have his year interrupted by injuries and COVID-19 health and safety protocols.

Was Game 5 on Tuesday his best playoff performance? Better than 43 points, 13 rebounds and seven assists against the Cleveland Cavaliers in the 2018 Finals? Better than the 50 points he dropped on the Los Angeles Clippers in 2019?

"I don’t rank performances," he said. "Once they happen, I just move on and try do it again. But it was a fun game to be a part of, and there’s a lot of games in my career that I felt like it was just as fun. I’m sure when I reflect on it, we can talk about it then. But for now, it was great that we got the W."

June 16, 2021 NBA Comments Off on ‘Beautiful to watch’: Kevin Durant saves Nets’ season with game for the ages against Bucks
NFL News