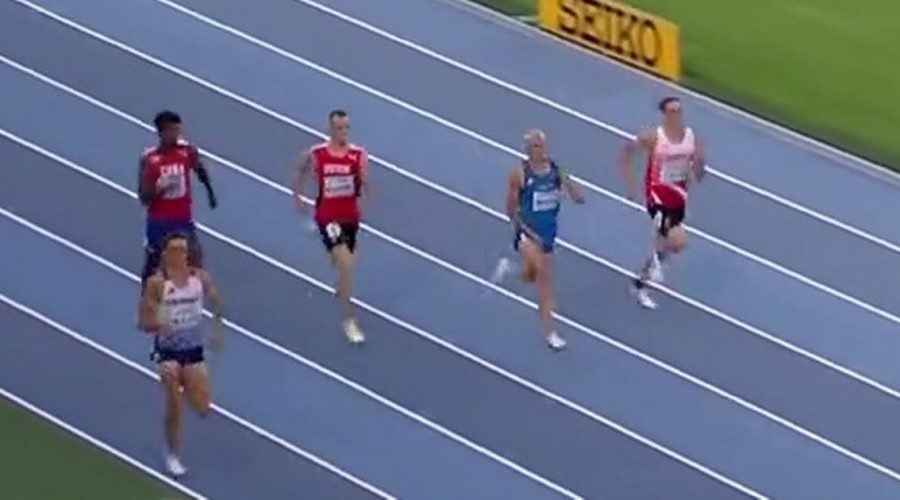 An Italian athlete ended up last in his 400-metre race at the 2022 World Athletics U20 Championships – after making the rash decision to go commando and having to run with his willy falling out of his loose-fitting shorts.

Decathlete Alberto Nonino started off promisingly and went past two rivals in spectacular style on the last bend. But in the final straight he slowed down noticeably and was filmed grabbing his crotch up to six times as his competitors went past him and he finished at the back of the pack.

The 18-year-old’s problems down below were immediately cited as the reason for his slow-down. Sports journalist David Sanchez de Castro left nothing to the imagination by revealing in a tweet alongside footage of Nonino’s embarrassing moment: "World Athletics U20 Championships in Cali, Colombia.

READ MORE: Sprinter wheeled away in tears after crushing injury in 100m heat at Commonwealth Games

"Last series of the 400 meters decathlon. The Italian Alberto Nonino in lane five begins very well but crosses the finishing line last. He had his p**** out, literally."

He added in a follow-up explanation to followers who didn’t immediately grasp what he was getting at: "Perhaps I’ve explained myself poorly. His penis escaped out of the side of his shorts and he had to hold it because it wasn’t allowing him to run properly which is normal when your dongle is swinging from side to side."

HAVE YOUR SAY! Have you ever had a problem with loose-fitting shorts? Let us know in the comments section.

Spanish-speaking press were quick to claim Nonino’s slow 51.57 second 400 metres was the result of him opting to run without underpants. The athlete appeared to confirm his problems in the trouser department were to blame for his disappointing performance in social media statements after the footage of him bringing his hand to his shorts as he slowed down started going viral.

He said in an Instagram story: "I just want to talk to you a little bit about the rumpus there’s been on blogs and social media in general. I’m conscious it was obviously an accident and I’d like to tell you I’m aware of the reaction and you don’t need to send me the links to the blogs out there.

"I’m trying to laugh about it now but immediately afterwards I felt terrible and I’m thankful to my friends and family for helping me get over what happened a few hours later."

He added in a swipe at the press attention his faux pas has received: "The journalistic world worries about cases of bullying throughout Italy and around the world and then publishes these articles that for a more sensitive person could have done a lot of harm."

Fans joked afterwards the 21-year-old should win the ‘tackle of the week’ poll. Respected Spanish daily La Razon said of Italian athlete Nonino’s Cali blunder: "This race will at least serve as a lesson for future events. Better to wear pants and use the right shorts for long-distance events."