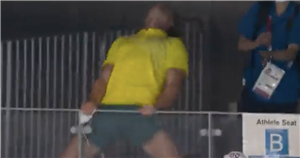 Titmus, 20, delivered US rival Katie Ledecky's first ever defeat in an Olympics final at the Tokyo Games.

It was Ledecky who held the lead for the initial 300m, but the Australian slowly began surging closer and closer until she was 0.16 seconds behind her opponent with 100m remaining.

She then reeled in the American with a brilliantly-executed game plan, which allowed her to win the race by half a body-length in a time of three minutes 56.69 seconds. And after Titmus' seismic victory, cameras panned to an ecstatic Boxall going berserk in the stands.

The Olympic coach provided one of the best moments of this year's Games so far with his celebration, punching the air in excitement and shaking the glass barrier in front of him.

Boxall was later spotted shedding a tear when his swimmer took to the podium to collect her gold medal. The pair then embraced each other when Titmus walked over to the stands.

After pipping Ledecky to the gold medal, Titmus waxed lyrical about the impact Boxall had leading into this year's Olympics.

"He means everything to me," she said. "Coming into this race we knew what we had to do.

"We didn't discuss what I wanted to do in the pool. It was more of a have fun moment. I love you. Have fun. We practised this for so long. I just knew what I had to do when I got out there."

Boxall's hilarious celebration quickly went viral on social media, with fans branding it the best moment of the Tokyo Olympics so far.

One wrote on Twitter: "Dean Boxall is my favorite Olympics moment thus far".

Another put: "The Dean Boxall moment was almost designed to go viral. I'd never heard of him before but pretty confident he’ll now never have to buy himself a beer ever again".

While a third said: "That was my favourite part of the whole race".