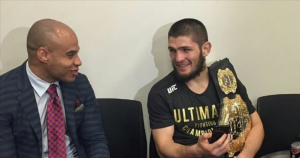 Ali Abdelaziz, manager to Khabib Nurmagomedov and a number of other top MMA fighters, has a storied history with Conor McGregor, and recently took another shot at the Irishman.

Former two weight world champion McGregor is known for his heated rivalry with Khabib, but he has also had a few choice words for his manager on occasion.

Egyptian Abdelaziz, who went 1-3 in his pro MMA career before turning to management and starting Dominance MMA, has been quick to clap back at McGregor too, leading to an almost equally tenuous relationship between the pair.

And in a recent interview with Mike Tyson on his podcast Hot Boxin', Abdelaziz said that McGregor is nearly 'finished', and could be heading for a future in celebrity boxing after losing his allure with his recent MMA performances.

What many know is that there was an incident where Conor McGregor attacked a bus full of UFC fighters at the media day for UFC 223, resulting in a number of bouts being cancelled.

Abdelaziz was on the bus that day, and says that his client was calm despite the chaos, which saw Ray Borg and Michael Chiesa forced to pull out of their respective fights.

However, some won't realise that Abdelaziz was tangentially involved in the issue which caused it; a fracas between Khabib and McGregor's close friend Artem Lobov.

Abdelaziz can be seen in the footage of the exchange, seemingly attempting to calm things, but it surely played a part in McGregor's bad blood with team Khabib.

McGregor was reportedly unhappy that Lobov, with just one coach by his side in a New York hotel, was surrounded by Khabib's team, which includes Abdelaziz.

And after the bus incident, the manager branded McGregor a 'piece of s***', seemingly igniting the tension between the two

Up to this point, we knew that there was considerably deep-lying hatred between McGregor and Khabib.

But the Irishman spent some time at the end of the event levelling some pretty heavy accusations at Abdelaziz, including a few expletive-filled insults.

The disagreement began when the manager questioned off-stage why he was posing with UFC belts having been stripped of his lightweight and featherweight straps due to inactivity.

This heated exchange angered the Dominance MMA boss, and began one of the true rivalries in MMA, that many fans don't see playing out in public like many other McGregor feuds, but instead behind the scenes.

The fight between MMA's most bitter rivals finally went down at the T-Mobile Arena in Las Vegas on October 6, with the Russian coming out on top.

However, the event is known best for the post-fight antics, when McGregor and Khabib both became embroiled in post-fight brawls that cost them heavy fines.

Abdelaziz was in attendance, and when McGregor posted a lengthy statement detailing why he lost the bout, Abdelaziz responded with his own analysis, which included branding the Irishman 'embarrassing'.